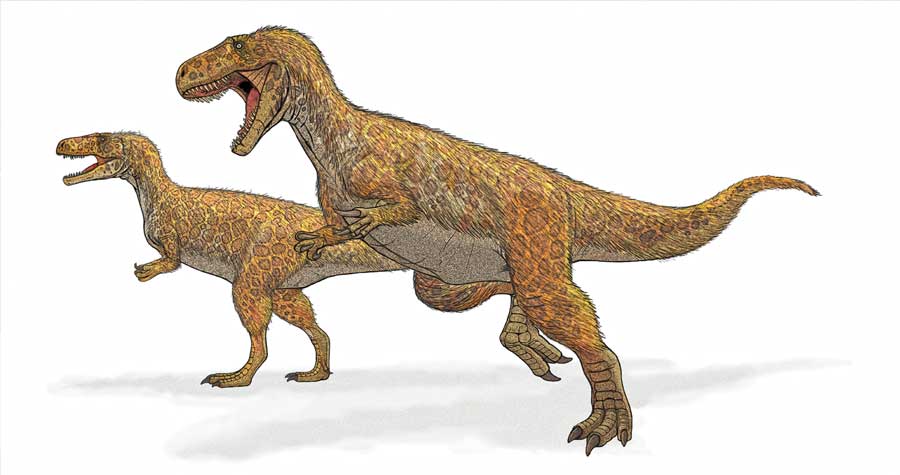 Yorkshire made the headlines again recently when Marie Woods stumbled upon a magnificent dinosaur footprint whilst foraging for shellfish for dinner. Found somewhere on the coast near Filey, the print is the largest ever found in the area, and this got us thinking that although we know Yorkshire has a huge history, it is often easy to forget that it dates right back to the Jurassic period and even beyond! In our feature this month, we look at the footprint discovery, and the history of Yorkshire back in a time when it was roamed by creatures far larger than the odd crab that we spot on the beach today!

The Mark of a Giant

Marie Woods, herself an archaeologist, left all thoughts of collecting shellfish behind when she realised that she had indeed spotted a giant print in the rock. Writing on Twitter she said, “I had originally gone to collect shellfish for dinner but got completely distracted by this beast!” She contacted local experts including renowned Palaeontologist Dr Dean Lomax who has carried out significant research into the Jurassic history of the Yorkshire Coast.

Dr Lomax confirms that it is the “largest theropod footprint ever found in Yorkshire” and that it most certainly belonged to a meat-eating giant which lived between 164-175 million years ago, possibly a Megalosaurus. The dinosaur which made the print would have been around 9m (30ft) in length.

The print that Marie found, had in fact already been discovered last November by Rob Taylor, who posted photos of it on his social media. However, because it was only partially uncovered at the time, the importance of the discovery was not recognised. Both Marie and Rob will share finder’s rights.

This three-toed print was in a fragile state and in danger of being lost to the sea, so it was recovered quickly. It will be placed on display in the Rotunda Museum in Scarborough, once it has been analysed and made safe.

The Jurassic History of Yorkshire

Britain’s oldest dinosaur fossil was found right here in Yorkshire – Whitby to be precise. Found on the beach after it fell out of the cliff face, the backbone dates to the Middle Jurassic period around 176 million years ago. The bone belonged to a Sauropod and represented the earliest skeletal record of this type of dinosaur in the UK. Sauropods had a small head, long neck and tail and walked on all fours, with some species in the group growing up to 35 metres long. This fossil is an extremely rare find as Middle Jurassic rocks are exposed in very few areas of the world and most fossils of a similar age have been found in China and South America.

Even though this rare find is ancient, there is evidence of even older life in the area. Rocks on the Yorkshire coast are older in the north than they are in the south, and the whole 35-mile-long area stretching from Staithes to Flamborough is aptly known as the Jurassic Coast. At the beginning of the Jurassic period, around 200 million years ago, a huge ocean covered Europe which teemed with marine life. Many of the creatures who lived and died at this time were preserved in mudstones and limestones which littered the bottom of the ocean floor, and these are found today as Ammonites, and less occasionally bones of marine reptiles are found too.

By 170 million years ago, the ocean had receded, and the Yorkshire region became a coastal area with scrub and forest. This Middle Jurassic period is when dinosaurs left their mark in the form of footprints and the occasional bone such as the Sauropod bone. The mudflats in the area were perfect for capturing the prints of dinosaurs roaming the coast at this time. Although it is hard to believe now, Yorkshire was tropically hot! And the heat often caused the mud to dry quickly, with prints becoming covered with sand, silt, and mud before they eventually turned into sandstone and mudstone. The footprints we find today are actually 3D casts of the originals.

20 million years later, the Upper Jurassic period saw a warm shallow sea invade the land and animals living on the seabed during this time were preserved in gritstones, limestones, and clay.

Jurassic Yorkshire was teeming with life ranging from minute creatures to giant beasts.

Ammonites – The most commonly found fossil along the coast are ammonites which resemble coiled snakes. The creature was like a squid in a shell and would have lived in one third of the shell with the remainder being gas filled chambers which acted as buoyancy aids. There is a local legend that ammonites were formed when St Hilda the Abbess of Whitby drove a plague of snakes over the cliff at Whitby.

Belemnites – these look a bit like bullets, and the nearest modern equivalent is a cuttlefish bone. This was also a squid like creature but instead of an external shell, contained its hard structure on the inside. Belemnite fossils vary in size and shape.

Marine Reptiles – Ichthyosaurs and Plesiosaurs swam in the seas that once covered Yorkshire. Measuring from 3-13 metres in length, the Ichthyosaur resembled a dolphin. It was thought to have been a fast, powerful swimmer and gave birth to live young. The Plesiosaur was in the same size range but had a very long neck and four paddle like fins for propulsion. The Plesiosaur would leave the water to lay eggs on land, and both reptiles were air breathers who needed to surface regularly to breathe.

Bivalves – bivalves still exist today in the form of cockles, mussels, and oysters. There is little difference between these and their Jurassic counterparts apart from their age!

Crinoids – these very small creatures resembled starfish on a stem. The stem was made up of hundreds of flat star shaped plates stacked on top of the other. The head had five or more arms which were used to catch food, and at the bottom, a root system to hold them in place. Although they looked very much like a plant, they were not.

Scaphopods – these shellfish are even older than Jurassic, first appearing over 350 million years ago. They can still be found today in warmer climates and are known as tusk shells because of their likeness to elephant tusks.

Dinosaurs – Of course, the Jurassic period wouldn’t be as infamous as it is today without the discovery of dinosaurs. We know there were several species living in the area, including theropods, one of which left the footprint recently discovered. There is evidence of the Megalosaurus living in the area which is now the North York Moors National Park. The Megalosaurus was the first dinosaur to be officially named after its discovery in 1824 in Oxfordshire. Thought to be like a giant lizard, it was initially thought to be around 20 metres in length, but research has found it was more likely around 7 metres long and weighing in at more than one tonne. It walked on two legs using its tail for balance and had a large head and short forelimbs. The Megalosaurus is the most commonly found dinosaur in the UK.

Another dinosaur species is the herbivorous Ankylosauria, covered in plates or spikes which acted as natural body armour. These had a small brain in proportion to its body size. They were short and bulky in appearance with powerful limbs. Remains of one were found in Harrogate.

Common fossils you can find on our coast are ammonites, belemnites, plant remains and excitingly dinosaur footprints. The best place to look for dinosaur footprints is Burniston Bay near Scarborough. Less common discoveries are fossilised vertebrae from reptiles and bivalves. Cayton Bay, Speeton, and Robin Hood’s Bay are all excellent fossil hunting spots but the whole stretch of our coastline yields finds – you just have to look carefully!

“This entire coastline is rich with fossils, and, of course, it’s great fun going out to try and find them, and really exciting when you do!

“We would always encourage people, though, to think about their safety – some of the cliffs around here are unstable, and it’s crucial to keep an eye on the tides. And if you do find something that you think is really interesting, like the recent huge footprint just north of Scarborough, please don’t try and remove it yourself. Contact us, or the nearest museum to your find – it’s important that it’s professionally removed and stays intact.

“And, of course, we’re always very happy to help you identify any finds you make – and you might want to pay a visit to the Rotunda Museum, where there’s an extensive collection on show, including some fossils found by the father of English geology himself, William Smith, back in the early 19th century.”

The Rotunda Museum in Scarborough is a great place to head if you want to see fossils without hoping to find some yourself. Opened in 1829, it was one of the world’s first purpose-built museums. There is a fabulous collection of fossils and specially commissioned reconstructions of what marine life was like millions of years ago. There are also items on display from the Star Carr collection! The museum is excited to be reopening their doors on the 18th of this month!

After an extremely unsettling last 12 months, as restrictions are lifted we begin to travel further afield and get back to some sort of normality, how fabulous it is that we have this incredible coastline on our doorstep to explore, enjoy and maybe even take a trip back in time a few million years!