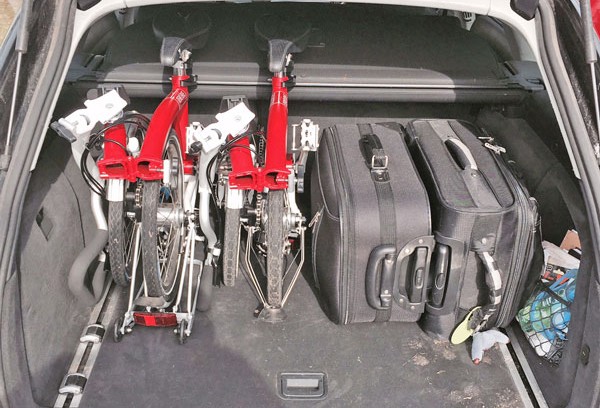 The Start of the 2015 Tour de Yorkshire

Fuelled by the excitement at the start of the Tour de France, last year, my wife and I decided that the start was again the place to be. The fact that the race was to begin in Bridlington was a bonus, since we have regularly visited the east coast resort since our children were young.

We had planned to cycle from Leeds, but work commitments left us short of time. We still wanted to be on two wheels at the start so decided we would pack our British built, Brompton Folding bikes into the back of the car. The compact size of the bikes was ideal since we were staying overnight in a static caravan.

As we drove towards Bridlington, I was feeling a little disappointed as there didn’t seem to be the same atmosphere as there had been for the Tour de France. Everything changed as we approached Wetwang where the buildings lining the main road were covered in Yorkshire flags and bunting. The yellow bikes that we have all grown used to on the roadside, had been re-painted in blue and yellow. I was so impressed as I drove through that I forget to make the pilgrimage to Harpers fish and chip shop – a family tradition! I knew it was going to be good at the start line.

Bridlington has suffered from bad publicity and comedian’s jokes for years but behind its Victorian façades are some fantastic places to eat and drink and a coastline, which must be hard to beat within commuting distance of Leeds. Minutes after arriving at the Caravan Park we had unpacked the Brompton’s and were enjoying a short but spectacular cycle ride along the cliff top path to The Marine Bar, adjacent to The Esplanade Hotel. The bar and outside terrace were buzzing with excitement from a big group of cyclists and locals. The Timothy Taylors Le Champion Blonde beer had made a return for the Tour and was excellent.  We probably enjoyed it a little too much and decided to fold the bikes up and leave them at a friend’s apartment overnight.

Determined to enjoy the atmosphere in the town we proceeded, on foot, to The Suppatra Thai Restaurant. OK, its not typical Yorkshire fare, but the food is superb and we enjoyed a feast of exotic flavours and textures. The highlight for me was locally caught crab in a yellow curry sauce, accompanied by a generous portion of sweet and sour crispy rice noodles. A friend of mine who travels the world says that the Thai food here is as good as anywhere he has eaten.

After a rather cold night in the caravan we picked up the bikes and cycled up to the start line.

Team buses were arriving and the riders were warming up for the long ride ahead of them. I was pleased to see good representation from some of our suppliers: The Madison Genesis Team was there in force and the Cofidis team were proudly displaying their new Orbea bikes. Bikes from both brands are available in our Leeds store. Yorkshire Rider Ben Swift was representing Sky, unfortunately he crashed out of the race on the first day.

Being so close to the riders and their equipment made me realise that the bikes that they ride are not that different to the ones that we sell, the sport really is accessible to everyone regardless of budget.

Cycling fans flocked around all the teams hoping to catch a glimpse of their heroes. The investment in team buses is amazing but by far the biggest crowd was around a relatively ordinary blue motor home bearing the name WIGGINS. Yes, the Tour de Yorkshire was one of the first events for Sir Bradley’s new development team, and the star was there for everyone to see. Bearded and reportedly 10kg over weight he didn’t expect to win but the crowds didn’t seem to mind.

As the Peloton gathered for the Grand Depart outside the spectacularly refurbished Bridlington Spa (Oasis played there a few years ago), we pedalled as fast as we could to the official start line in Sewerby. The gathered crowd had a real treat as the police outriders and team cars speed past in front of the riders. In a flash the bikes had passed at the start of a hard days riding before finishing the day in Scarborough.

We cycled back towards the caravan park and passed the Marton Manor Farm Shop and Tearooms. In need of some sustenance, after the day’s excitement, the advert for afternoon tea seemed to beckon us in. At £10.95 for two, this presented a perfect end to our day.

Bridlington has some great places to visit and using a bike is the perfect way to enjoy it.