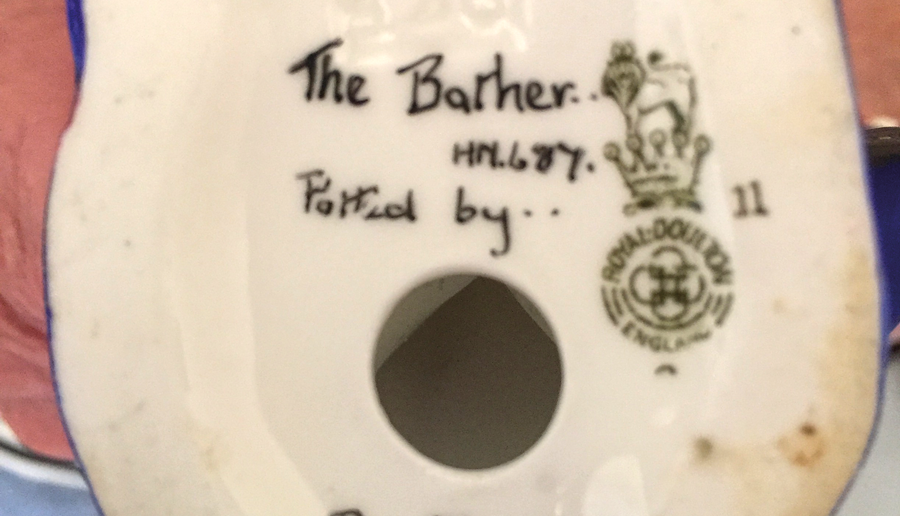 I have attached some photos of a Royal Doulton figure called ‘The Bather’ which has the number HN687 underneath. What can you tell me about it? The HN number under your figure shows it is Style One and was designed by L. Harradine and manufactured from 1924 – 1949 by Royal Doulton. There are at least 9 versions of ‘The Bather’ that were produced. Sadly the value of these Royal Doulton figures is decreasing as fashions change and we have seen them sell for as little as £180 recently. We would hope that with our vast database of collectors we could get a better price for you, but probably sooner rather than later.

I found this old green telephone in the attic of the house we moved into some years ago.

I really like it because it looks retro. Could it be worth anything? It looks like you have found a very rare type 234 jade green Bakelite telephone from the mid-war years in the 1940’s. You should find some impressed marks underneath it. If it is that model, it could sell for between £600 – 800. A good find!

I recently saw your advert in the Yorkshire Reporter newspaper.

This was my Grandma’s ornament which she called ‘Bubbles’.  I wondered if it was worth anything, unfortunately it no longer has a bubble pipe. Thank you for your email. Your grandmother’s figure is made of bisque, which is underglazed white porcelain. Most of these bisque figures were made in France or Germany and were very popular in Victorian households. Bisque was used in many other items, particularly Parisian ware and many Victorian dolls heads were made of bisque. Your figure is definitely German and is called ‘Blowing Bubbles’, so your grandmother was right. It was made by a manufacturer called Gebruder Heubach, who were best known for producing bisque dolls and dolls heads in Lichten, Germany from 1840 – 1925. Your figure was one of a pair, and the girl is much rarer to find than the boy. Unfortunately these ornaments are not popular with the younger generation today which is reflected in the price. Yours would sell for under £100.

My father bought this coin set many years ago as an investment. What might it be worth today? Thank you for your email. Your father’s coin set is a Gold Proof Sovereign Three-Coin Set that contains a double sovereign, a sovereign and a half-sovereign. It was made to commemorate the 500th anniversary of the sovereign. We would put an estimate of £1500 – 2000 if it came up for sale at auction. Subject to viewing, it may even fetch more from some of our collectors.

I have an old vase that looks to be handpainted with a pheasant in a landscape. It is 13 cm high and is marked Royal Worcester underneath. Could it be worth something? Your vase is handpainted and probably by James Stinton who was a known artist for Royal Worcester. The mark underneath should be a crown and a circle and it was made around 1905. It is known as blush Worcester and should sell at auction between £200 – 300. Larger vases can fetch a lot more.