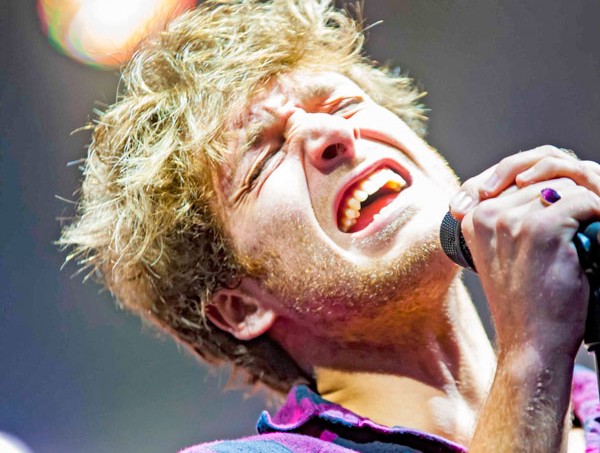 Last Month has been exciting musically speaking. June saw a definite turn to enjoying music outside that is set to continue through to September. Even if the weather had not been playing ball the enthusiasm had not been dampened by the inclement weather.

Paolo Nutini just about sold out Millennium Square for an evening of gravel voiced, New Orleans jazz inspired, Paisley pop. Last year saw the Scot reach new heights with the release of his third album, the irresistibly soulful and critically acclaimed Caustic Love which went straight into the charts at number one, quickly reaching platinum status and cementing Paolo as one of the country’s leading artists. In true slouched back, just got out of bed style, the finely tuned performer delivered a set of hits, some of which brilliantly re-imagined to fully utilise an impressive live band.

Racecourses might be the new music stadiums if the jam packed Haydock Park is anything to go by. Major superstar Kylie Minogue set the ball rolling for a series of summer evening concerts at the course which will also see Madness and Kaiser Chiefs playing there in the next couple of months. Not sure how they will follow Kylie though who was absolutely mesmeric from the start to the end of her two hour set. It is useful to have a catalogue of hits to perform and that’s just what she did. She may be diminutive in stature but she has a persona as big as any other superstar you’d care to mention!

The rain held off for both Paolo and Kylie. Alas, the same cannot be said for the biggest rock show on the planet. Download, held at Castle Donnington, is in its fifteenth year but it’s probably never seen a twenty four hour deluge before. Not that the rain dampened the spirts of the 120,000 who attended over the three days to see such bands as Muse, Kiss, and Slipknot the three headliners who it has to be said delivered OK performances.

The biggest buzz of the weekend though surrounded the worst kept secret of the weekend. The “secret”show by The Darkness, primarily to promote their new album The Last of Our Kind, though I Believe in a Thing Called Love still got the most rapturous response. Other highlights of the festival included Beartooth, who surely will be playing the main stages of such festivals sooner rather than later. Also take note of three bands making their Download debuts.

Purson, from Southend are a psychedelic rock band founded by Rosalie Cunningham formed after Cunningham disbanded her previous project Ipso Facto. The Circle And The Blue Door, their rather wonderful record finds the missing link between Pentangle and Pentagram, by way of David Bowie’s dream reality and The Beatles’ feel for the perfect melody.

Far removed from Purson are a band called The Pink Slips. They are precocious, inventive and slightly deranged. Up against Muse on the main stage they still brought a huge crowd to their performance. You’ll be hearing of them in the near future no doubt as the saviours of rock music!

September Mourning have picked up a huge following on Facebook and it was easy to see why. Giganticmelodramatic tunes with the divine voice of lead singer Emily Lazar.

Some concerts did stay undercover.

Du Blonde was at The Brudenell performing her record Welcome Back To Milk. At first she seemed a little hesitant, almost unsure. But this was only fleeting. Soon her audience was mesmerised and rejuvenated. She had a presence that is rare. You feel a connection with her normality.  The first half of Du Blonde’s set was impressive. By the time a cover of Pixies’ “Where is My Mind?” walks into the room, she and her band had already sprinted through “Black Flag” and “Hunter” – the flagship songs from the album: Dark and Brooding. The thudding of an alt-rock medley soon gets the blood pulsing.

Finally, The Tubes, the San Francisco-based rock band whose 1975 debut album included the controversial rock anthem White Punks on Dope, celebrate their 40th Anniversary when they embark on a 9-date UK tour in August 2015: Only a few tickets left for the Brudenell show: It will be memorable!