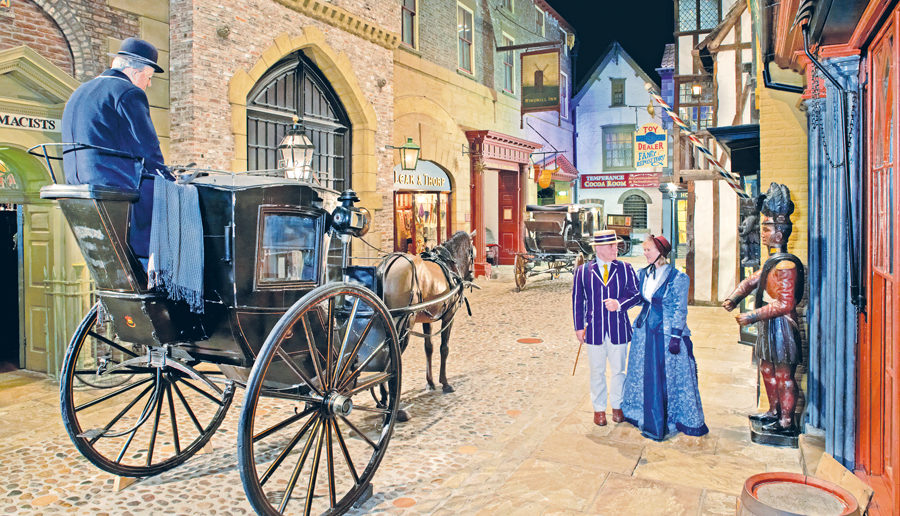 In our imagination and in film, we see a ‘Hansom Cab’ clattering along the damp,  foggy streets of Victorian London maybe carrying Sherlock Holmes and Doctor Watson, or perhaps Jack the Ripper escaping capture from the police!

This mode of transport was invented by Yorkshireman, Joseph Aloysius Hansom born in York in 1803. His father was a joiner and when Joseph left school at thirteen he became an apprentice in his father’s workshop. It wasn’t long before it became obvious that he had a talent in this field and had a good eye for design and ideas on construction. His father noticed this early on and decided that his talent for this work should be developed. Joseph was then apprenticed to a Mr Phillips, an architect and Joseph being talented and ambitious, worked hard and continued his education by going to night school and aged seventeen, he became Mr Phillip’s clerk.

Within five years he became established in his work, married, and moved to Halifax assisting a Mr Oates. During this time Joseph became interested in ecclesiastical architecture making a study of the Gothic style. Pursuing his career with energy he went into partnership with Edward Welch, an architect. ■ Artist’s impression (1831) by W. Harris, of the Hansom & Welch design, as entered into the competition to design the building. The original is on display there

Unfortunately, this association ended in financial ruin. Initially, things seemed to go smoothly designing several churches built in various locations, then along came what seemed to be a great chance for two ambitious young men, when in 1831 a prize was offered for the best design for a town hall in Birmingham.  Seventy architects entered the competition, including Hansom and Welch. They worked hard, submitting several designs and eventually one of Hansom’s designs in the style of a Grecian temple with eight Corinthian pillars across the frontage was selected as the winner. Hansom and his family were overjoyed at winning.

However, things went sour on Hansom and Welch in a couple of years. When the two were asked to become sureties to the contractors, the best workmen they could find were brought in.

Hansom and Welch enthusiastically put their money into the scheme, but things went drastically wrong. People they had trusted deceived them and financial affairs went sour, but work had to carry on. The Birmingham Town Hall was completed in 1833 but the men responsible had gone bankrupt. Edward Welch had not only put his money into it, but a friend’s £6000 as well. Welch was ruined.

Not long after this, Hansom decided to put his talents to another use and set out to design a one-horse cab that was safer than the type already in use.  The vehicles wheels were 7ft 6in in diameter, which was higher than the carriage body and short axles were attached to it with the doors low down with one on each side of the cabby’s feet with his seat on the roof directly above the passengers’ heads.

Hansom’s ‘Safety Cab’ as he called it, was patented in 1834. Over the next few years he attempted several improvements which included moving the driver’s seat to the rear of the vehicle elevating him higher than previously with the reins going over the roof. However, these changes didn’t improve safety, in fact it decreased the safety and stability because the reins held the horse’s head too high, making it liable to slip.

Hansom thought about this and came up with another idea. He constructed a model with the wheels minus the spokes, larger than previously. Passengers would have had to get into the cab through the centre of the wheel, but thankfully this design was scrapped.

Money trouble once again reared its ugly head through no fault of Hansom’s. He tried to dispose of the rights of his cab for £10,000 to a company, but unfortunately the company itself got into financial difficulties. Hansom took control of the management to try to sort things out. He succeeded in doing this but only got £300 in return for his £10,000.

The vehicle we know as the ‘Hansom Cab’ bears little resemblance to the original types, for the design for the cab as we know it and seen on the streets in large numbers was through the work of John Chapman, projector of the Great Indian Railway. Chapman was the Secretary of the ‘Safety Cabriolet and Two Wheeled Carriage Company’ and could see the weak points in Joseph Hansom’s attempts and went on to produce a better vehicle. The cab became so popular that Prime Minister Disraeli called the cab the ‘Gondola of London’. Although Hansom’s name is forever linked to that famous cab, this was only what could be called a ‘sideline,’ his real work was in designing churches. From the middle of the nineteenth century until his retirement in 1879, and in partnership with his younger brother and later his two sons, designed and built Roman Catholic churches, convents, and schools both in this country and abroad as far as Australia and South America.

Joseph Hansom finally retired at the age of seventy-five and died on June 29th 1882 at his Fulham home in London and was buried in the Roman Catholic church of Thomas of Canterbury.