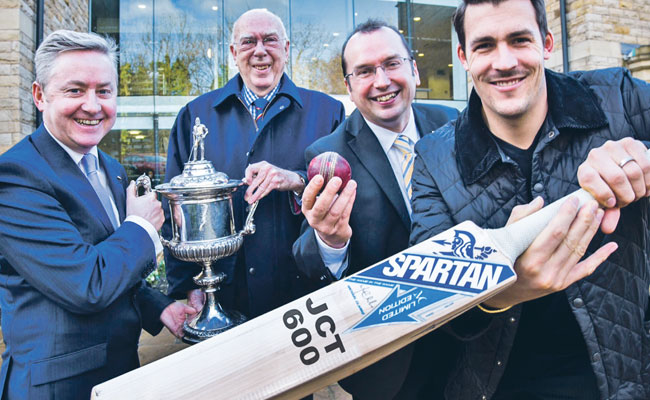 As well as giving its name to the historic league, JCT600 can also be seen on banners at league grounds and its branding appears on the league’s website, trophies and umpires’ jackets.

Formed in 1903, the league is acknowledged as one of the strongest in the country, boasting 152 international cricketers amongst its past players including cricketing legends such as Sir Leonard Hutton and Ray Illingworth. Brian Close and Sir Jack Hobbs are also former league players along with current stars including Yorkshire captain Andrew Gale and England cricketers Adil Rashid of Yorkshire and James Middlebrook, now of Northamptonshire.
The League Championship was won last season by Cleckheaton with Pudsey St Lawrence as runners up; Farsley won the Division Two championship with New Farnley taking second place.

Keith Moss, president of the JCT600 Bradford Cricket League, said: “As one of the longest-established and most successful businesses in Yorkshire, JCT600’s continuing its support is invaluable to us. With its strong roots in the local community, the company has been a loyal sponsor and we are delighted to be continuing our seven year relationship with them.

“The backing of JCT600 has enabled us to update our systems and continue our programme of on going improvements which would simply not be possible without the company’s support.”

Graham Clark, HR director of JCT600, commented: “The Bradford Cricket League is renowned as one of the best leagues in the country. It is a long established institution with a loyal following which adds to Yorkshire’s outstanding sporting heritage and we’re proud to continue as its main sponsor.”

With its headquarters in Bradford, JCT600 is a family business with a history of more than 60 years. It has 47 dealerships throughout Yorkshire, Derbyshire, Lincolnshire and the North East and sells 19 of the world’s most respected brands such as Aston Martin, Audi, Bentley, BMW/MINI, Ferrari, Maserati, Mercedes-Benz, Porsche, Vauxhall and Volkswagen.