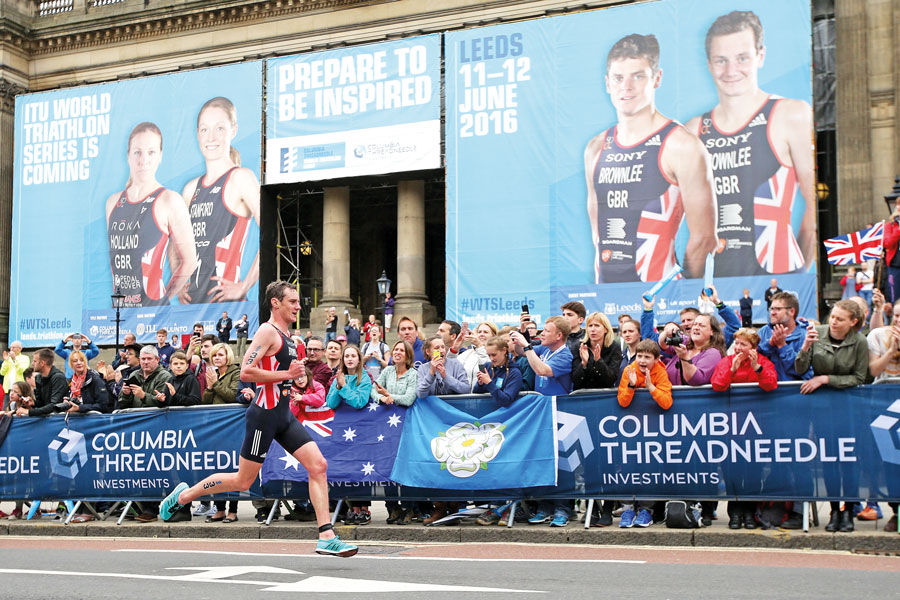 Leeds will again host a leg of the prestigious ITU World Triathlon Series next year following the success of the inaugural event in the city last month.
The International Triathlon Union (ITU) has released the calendar for the 2017 ITU World Triathlon Series, confirming the dates and locations of the places around the world selected to host races featuring the highest level of elite triathlon competition each year.
The Leeds event representing the UK will be held on the weekend of June 10-11 2017, again hosted as a partnership between Leeds City Council, UK Sport, the ITU and the organising team of British Triathlon and IRONMAN.
It will be looking to build on the major success of this year’s first-ever ITU World Triathlon Series event in Leeds, which memorably attracted enthusiastic crowds in excess of 80,000* people lining the route from Roundhay Park to the city centre and the grandstand finish on Millennium Square.
The elite men’s and women’s races were broadcast live on BBC television and to more than 20 countries around the world, with more than a million people in the UK alone watching British stars Alistair and Jonathan Brownlee claim a dream one-two in their home city as they continue to build towards the Rio 2016 Olympic Games.
Reigning world champion Gwen Jorgensen of America proved her class by winning the women’s race, with Leeds-based British star Vicky Holland finishing strongly to make the podium in third.
The crowd size, atmosphere, route and support in Leeds all drew widespread acclaim, with many of the leading triathletes hailing the experience as being the best of any ITU World Triathlon Series race ever and to be compared to the triathlon races at the London 2012 Olympic Games.
Aside from the elite races, more than 6,000 people also took part in beginner and mass-participation triathlon events across the weekend. Full details of the mass participation events for 2017 will be released later this year.
The Leeds event in 2017 is race four in an eight-leg ITU World Triathlon Series (further events may be added), following on from Abu Dhabi, Gold Coast and Yokohama. After Leeds the series moves on to Hamburg, Edmonton and Stockholm before the Grand Final in Rotterdam in September.
The race distances, with some being full Olympic distance and others being sprints (half-distance) will be confirmed by the ITU later in the year.
Leader of Leeds City Council Councillor Judith Blake said:
“We are thrilled that the ITU has chosen Leeds to again host a round of the World Triathlon Series in 2017. The elite races at the event last month were fantastic to experience, the crowd support and atmosphere was absolutely electric, so we look forward to working with the ITU, British Triathlon, UK Sport and all the partners involved to make it even bigger and better next year.
“In a hugely successful first year for both spectators and elite athletes, we learnt a great deal about delivering an event of this scale across the city. We know there are aspects which can and must be improved upon and we will support British Triathlon to ensure everyone taking part has a wonderful experience as part of something very special again here in Leeds next year.”
ITU President and International Olympic Committee (IOC) member Marisol Casado said:
“In its debut on the ITU World Triathlon Series this year, Leeds proved to be a phenomenal host, with crowds of people pouring into the streets to cheer on the world’s best triathletes. We have no doubt that the challenging course and roaring atmosphere will make for a great race again in 2017.”
Jack Buckner, Chief Executive of British Triathlon, said:
“To be able to put triathlon into the heart of a major city, right in front of people on the streets and on live television is really important in terms of the profile of our sport, and I’m delighted that the ITU World Triathlon Series will be back in Leeds in 2017.”
Simon Morton, Chief Operating Officer at UK Sport, said:
“Leeds provided a spectacular setting for the ITU World Triathlon Series, with passionate crowds inspired by their home town heroes’ success; it was a showcase of our National Lottery funded #EveryRoadtoRio series at its best.
“It will be fantastic for the series to return to the UK and Leeds next year, to build on this year’s event and the success our athletes hope to deliver in Rio.”
To pre-register interest for the 2017 World Triathlon Leeds visit http://leeds.triathlon.org/register
*This an initial estimated crowd figure. A full UK Sport-funded analysis and economic benefit report is currently being prepared.