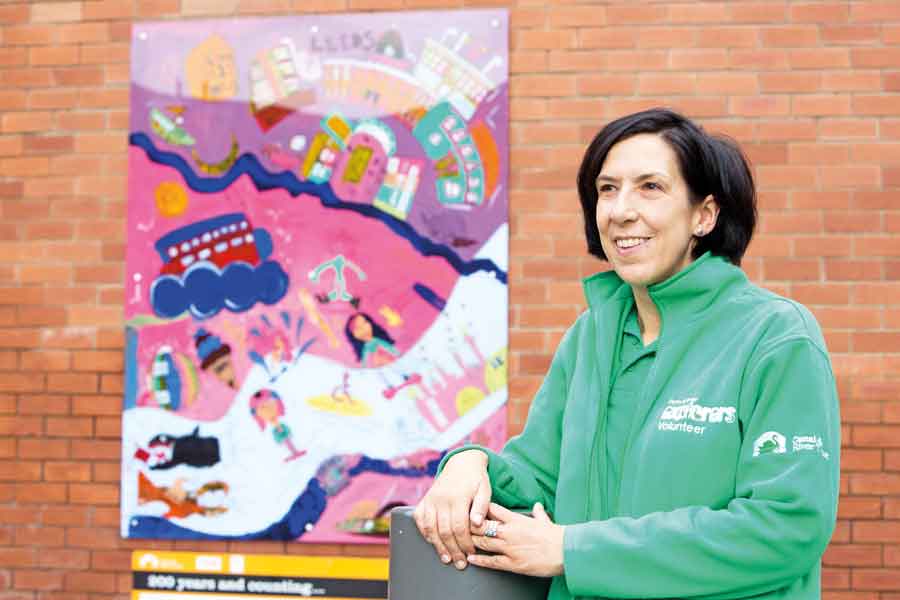 Three vibrant art panels have been installed on a public wall at Leeds’ Granary Wharf as a lasting commemoration of the Leeds & Liverpool Canal 200th birthday in November.
The installation, a triptych entitled ‘200 Years and Counting’ depicts the famous waterway’s past, present and future. It was created by a partnership project involving the Canal & River Trust, the Tetley Centre for Contemporary Art, Network Rail, St Joseph Primary School and Leeds artist Jennyanne Smith.
Before Jennyanne could start her work, Canal & River Trust’s education co-ordinator Claire Cavendish hosted some fun canal interactive sessions with the Hunslet school’s Year Five pupils.
“Many of the children hadn’t come across a canal before,” said Claire. “So we started with a bit of context – what is a canal, how were they built – and then using photos and role play, we explored how the canals moved from originally being trading routes to their leisure use today and the jobs that go with them.
“Finally, we got the children to think about how the canal would be used 200 years from now. Their imaginations ran wild and we had everything from water taxis around the city to mechanical sharks that detected and ate up all the rubbish.”
Armed with their new-found knowledge, Jennyanne then divided the youngsters into three groups, Past, Present and Future, and the doodling of ideas began.
With weeks of work under their belts, Jennyanne finally collected the youngsters’ finished results and transposed their paintings onto the three canvasses.
“The twisting dark blue line represents the canal,” said the artist, who was actually born in Liverpool. “I decided to start the triptych in my home town to depict the Past, then I used the famous Five-Rise Locks at Bingley for the Present and completed the journey with a futuristic finish in Leeds, which is where I’m based today.
“If you stand the three canvasses side-by-side, the canal actually threads its way through the three, joining up on each.” she added.
The triptych panels can be viewed in Granary Wharf, just outside Leeds main train station.