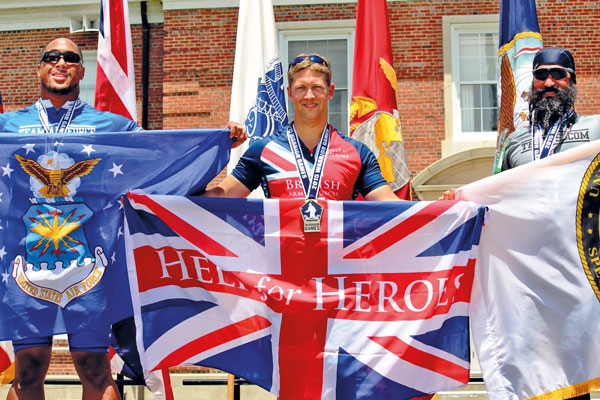 Two injured army veterans from Yorkshire recently spent a week at the US 2015 Warrior Games – an adaptive sports competition for wounded, ill, and injured service members and veterans, organised by the Department of Defence and, this year, held in Virginia.

As part of the 40-strong British Armed Forces Team, which is supported by Help for Heroes, David ‘H’ Hubber, from Ripon, and Rob Cromey-Hawke from Cowling, near Skipton, took part in several of the eight sports included across 10 days of competition in June.  And, before the tournament was even halfway through, both Yorkshire men had been awarded medals: Rob, a gold in the recumbent 20km race and David a bronze in the team recurve archery.

Rob was a Captain with the Royal Engineers when his vehicle drove over an Improvised Explosive Device in Afghanistan in 2012. As well as damage to his back, he also suffered hearing loss and a brain injury, causing memory and concentration problems, as well as balance issues.

Pre-injury, Rob was a keen triathlete but, afterwards, was convinced he wouldn’t be able to take part in competitive sports again. Help for Heroes funding of a high-performance recumbent trike and a racing wheelchair changed that and Rob credits the Charity’s Supported Activities team at Phoenix House Recovery Centre in Catterick Garrison with showing him how to push himself to his best ability.

“Participation in adaptive sport has had a profound and lasting effect on my outlook on life beyond injury, establishing my next career and continuing to partake in competitive sport where possible,” he said.

David was injured in 2001 while playing ice hockey for the Army in Canada. His resulting spinal condition deteriorated until, after ten years, he could no longer carry out his role within the Royal Logistic Corps.

Help for Heroes bought the 43-year-old his first wheelchair which gave him some independence and, when he found archery an ideal sport to pursue thanks to his upper body strength, it also funded a new bow, enabling him to compete at a higher level.

Vigorous training in the sport – he is a member of the Thirsk Bowmen archery club and attendee of Harrogate’s St. George’s Archers – has been a key element in helping David adapt to his injuries and he won individual and team gold medals at last September’s inaugural Invictus Games in London – an international sporting event for wounded, injured and sick serving personnel and veterans inspired by Prince Harry after he was a spectator at the 2013 Warrior Games.

Said David: “The Invictus Games was a stepping-stone in my journey through injury and recovery but I’ve a long way to go.” His motto is ‘Determination and perseverance through adversity’.

Wounded, injured or sick military personnel or veterans in need of support from Help for Heroes can visit www.helpforheroes.org.uk/get-support