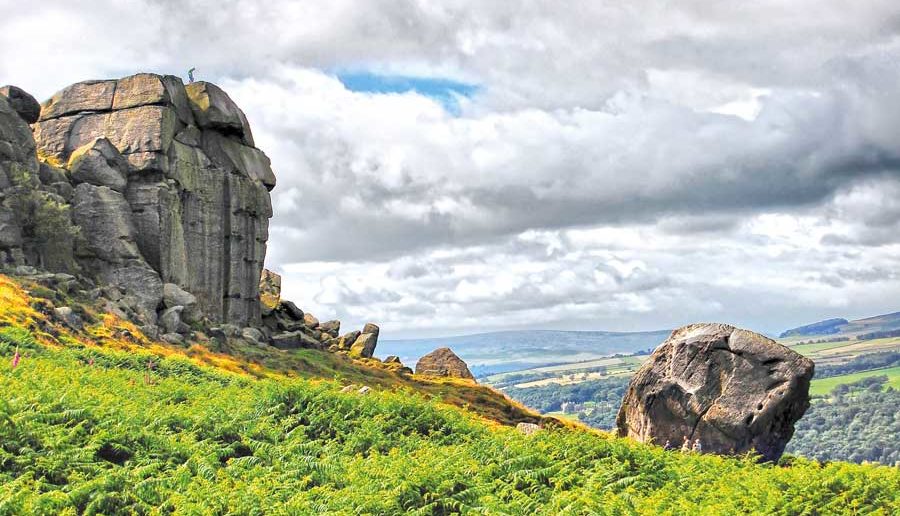 ■ The Cow and Calf rocks above Ilkley. The smaller rock, or "calf", is estimated to weigh about a thousand tonnes and to have fallen away from the rock face at some point in the last 10,000 years. Geologists suggest its movement was arrested from going further downhill by the Wharfedale ice stream, which had by then sunk to the level at which the boulder now rests. Wikimedia Commons image © TJBlackwell at English Wikipedia
Features

By yorkshire reporter on 07/01/2019 0 Comments
■ The Cow and Calf rocks above Ilkley. The smaller rock, or "calf", is estimated to weigh about a thousand tonnes and to have fallen away from the rock face at some point in the last 10,000 years. Geologists suggest its movement was arrested from going further downhill by the Wharfedale ice stream, which had by then sunk to the level at which the boulder now rests. Wikimedia Commons image © TJBlackwell at English Wikipedia

Close to Leeds is Ilkley Moor, part of the larger Rombalds Moor, and popular with the people of our city for exploring the outdoors, enjoying walks and browsing the shops of the spa town Ilkley. As well as being a beautiful part of the world, the moor is full of history, in particularly from the Bronze age and Neolithic periods. This month I look at how the moor was formed and a couple of famous features – the Cow and Calf rocks, and the Twelve Apostles stone circle. I will continue with Ilkley Moor next month with a look at the prolific ‘rock art’ found there.

If we travel far enough back in time to the Carboniferous period (325 million years ago), the area was hugely different to today. The moor was part of a sea level swampy area fed by northern river channels. Sediments over time were compacted into hard rock layers, and during the last million years, Ice Age glaciers modified the shape of the Wharfe valley to deepen it, leaving behind the acid soils, heather moors and rocky outcrops we see now.

The most famous of the rocks on Ilkley Moor have to be the Cow and Calf, also known as Hangingstone Rocks. Made from the local millstone grit, a variety of sandstone, the rocks are so named because one is a large outcrop, and the other a smaller boulder. A local legend says that the giant Rombald was fleeing an enemy and stamped on the rock as he leapt across the valley thus splitting the calf from the cow. Rumour has it that the enemy in question was Rombald’s angry wife, who dropped the stones she held in her skirt to form another local rock formation The Skirtful of Stones. The Great and Little Skirtful of Stones are Bronze Age round cairns that have unfortunately been badly damaged over time. The smaller cairn is in better shape than the larger one, although the centre has been dug out leaving it looking like the crater of a dormant volcano.

Also on the moor is the Twelve Apostles stone circle, situated just to the east of the Dalesway Link footpath on the northern slope of Ilkley Moor. The circle is made up of a dozen uprights and is one of the most visited prehistoric sites in West Yorkshire, but also one of its most damaged. Descriptions of the circle from the 19th century suggest there may have been as many as 20 stones, plus an earthen bank surrounding them of which little trace remains today. Local archaeologist Eric Cowling noted in 1946 that all the stones were recumbent at the time too. Nobody knows who re-erected the stones, or when, but they have been evenly spaced with no obvious entrance to the ring as there would have been originally. Although well surveyed, the circle has never been formally excavated, so the date of the monument can only be inferred by comparisons with similar sites.

It is a shame that the circles have been so damaged in the past, either in antiquity by robbers, or later by people ignorant to their significance. They are still well worth searching out though if you are walking in the area.