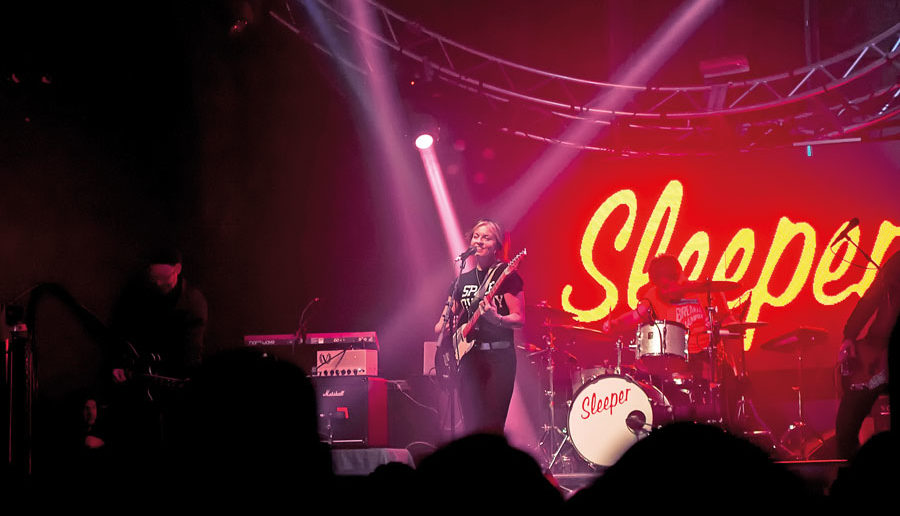 There has been in recent years, a return to yesteryear. A yearning for nostalgia. Hence the return to touring of the Spice Girls and the reforming of Westlife -not all nostalgia is good! However, it has also meant the return of some iconic bands. All selling out tours and not only it would seem fulfilling the yearning of their loyal fans but also increasingly gaining a younger audience who are hearing some of the music for the very first time. Thus, Sleeper played a second sold out headline tour within six months. They also release their first album in 21 years, The Modern Age. It wasn’t meant to happen. In fact, the band had promised each other it never would.

“We had no plan to get back together. Sometimes life throws you a massive curve ball. You end up jumping off the cliff, just to see what it feels like,” singer, Louise Wener told me. The Modern Age is the outward looking sound of a band revitalised and refreshed. Covering subjects from motherhood, social media, to personal loss, inevitably and relationships. The Modern Age retains Sleeper’s classic pop sensibilities with a shiny, new, contemporary feel. Sleeper enjoyed huge critical and commercial success in the mid-90s: achieving 8 Top 40 singles across 3 Top 10 albums with well over 1,000,000 sales.  Their music was characterised by astute, observational lyrics and big, hook driven melodies. Wener was an iconic front-person, heading up a movement that brought women centre stage in guitar music. They split in 1998 and walked purposely away from the limelight. Wener carved out a career as a successful novelist. Drummer Andy Maclure and John Stewart – Sleeper’s guitarist – both became lecturers in music studies.  But clearly, they preferred to be on the stage at The Church. Lots of memories for some of the crowd and lots of new memories for some of the younger element. Perfect nostalgia.

After last year’s slightly disappointing Leeds Festival, this year the announcements have largely gone under the radar to the point of invisibility. However, there has been a return to the tried and tested in terms of 2019’s effort. Indeed there seems to be a bit of a nostalgic feel to the whole festival this year. However, it is a new star that is causing all the ripples as far as this festival is concerned.

Billie Eilish’s meteoric rise to global stardom has been nothing short of phenomenal and arguably unparalleled to date. Since her ‘Ocean Eyes’ debut, Billie has quietly, yet unapologetically infiltrated the forefront of pop. Thanks to a growing legion of loyal followers across the globe, an EP that has sat in the Billboard Top 200 for more than 18 months now and more than 5 billion combined streams globally, her tours have sold out consecutively around the world, and the teenage marvel has recently released her highly anticipated debut album ‘WHEN WE ALL FALL ASLEEP, WHERE DO WE GO?’ via Darkroom/Interscope Records.  Billie Eilish continues to dominate globally, with her second SOLD-OUT European, New Zealand, Australian and Singapore tours just completed and another SOLD-OUT North American tour. The 16-year-old has also just announced she will also be making a pit-stop to Austin, Texas for this year’s SXSW Music Festival. Her debut single “Ocean Eyes’ has officially been certified RIAA GOLD in North America. Her debut EP “Dont Smile At Me” has now garnered an impressive 363,524,897 million streams worldwide to date, proving this teenage pop-phenom, who has been championed by the likes of Khalid, Lana Del Rey, Tove Lo, Charli XCX, Lorde, Halsey and many more, is nothing short of unstoppable. The young American artist, musician and songwriter continues to sell-out tours, generate millions of streams worldwide and wow fans with her signature song writing and live performances. Definitely the one to see this summer. You should remember her from around two years ago when here at Yorkshire Reporter, we introduced her with her debut single Bellyache, which is currently sitting at an impressive 40+ million streams, and she has managed to capture the ears, heads and hearts of music fans and the media across the globe with her alluring and self-described “gloom-pop.”.