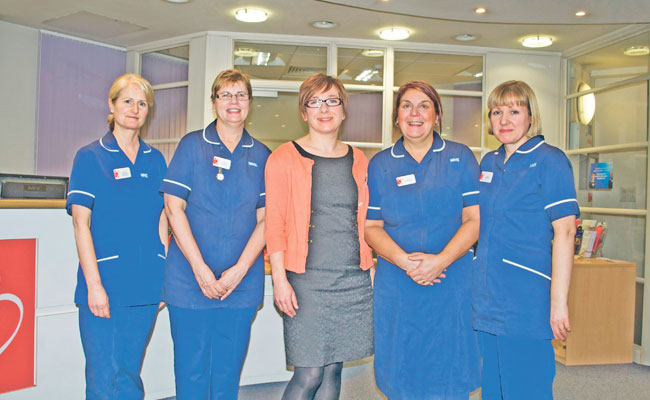 NHS Blood and Transplant have launched a nationwide campaign asking for more donors to give blood, platelets and plasma. The Yorkshire Reporter visited The Leeds Donor Centre on the Headrow and spoke to regular donor’s about their motivation behind donating. While the campaign calls for people with all blood groups to consider donating, the NHSBT are urgently appealing in Yorkshire for blood type O negative and B negative donors to come forward.

‘Don’t Give it Up. Give!’ is the message from NHS Blood and Transplant as people think about their resolutions for 2014. The clock striking to bring in the New Year is traditionally the time when people look to improve their own lives by giving things up. But, the chimes and fireworks can also be the prompt to do something life changing for others – giving blood or platelets.

‘During 2013, blood and platelet donors across England and North Wales helped save and transform the lives of hundreds of thousands of patients within the NHS and we are grateful to each and every one of them for taking the time to donate. We’re looking forward to welcoming them again into our donation sessions in 2014 as they continue to save lives. We’re asking others who haven’t donated before, or haven’t done so for a while, to come forward and join them. We always need new blood and platelet donors as every year some of our existing donors will need to stop donating for a while due to reasons such as illness, foreign travel or piercings. Also, the bigger the donor base the more responsive we can be, by having donors we can turn to when we need donors of a certain blood group to meet patient needs.’

To make things easier for all donors, NHS Blood and Transplant has recently improved blood.co.uk. The new website provides a secure, easy-to-use online service that enables new and regular donors to:

• Search for sessions
• Book appointments online
• Change contact details in real time
• Cancel appointments if they are no longer convenient.

Donated blood is a lifeline for many people needing long term treatments, not just in emergencies. Your bloods main components, red cells, plasma and platelets are valid for many different uses.

An urgent appeal is being launched in Yorkshire for O negative and B negative blood donors. The number of people giving blood in the Yorkshire area has dropped over the past 5 years according to NHS Blood and Transplant, and they say that the festive period has seen high demands for blood which means stocks have fallen. Donors with Group O negative are commonly known as the ‘Universal Donor,’ as their blood can be given to patients with a different blood group. This can prove vital in emergency situations where there may not be time for an immediate blood group testing to be carried out. Approximately 7% of the population have this blood group.

Each unit of blood donated could help save or improve the lives of up to three people. Besides being crucial to care in A&E, blood is used to treat patients with cancer, blood disorders like sickle cell or thalassemia as well as women needing blood during childbirth. Platelets are tiny cells in the blood which help to stem blood loss by enabling clotting and can be used to help cancer or leukaemia sufferers undergoing chemotherapy. Platelets only have a shelf life of seven days so it’s vital stocks are constantly replenished to meet patient need.

• NHSBT collects approximately 1.9 million units of blood each year from 1.3 million blood donors
• Hospitals in England and North Wales need around 7,000 units of blood every day to treat patients with a range of health issues
• Only four per cent of the eligible population are active blood donors
• A unit of blood is measured as 470mls (or just under a pint)
• There are four main blood groups – O, A, B and AB. Over 95% of the blood collected is processed into its main components – red cells, platelets and plasma.
• Male whole blood donors can give blood every 12 weeks, while female blood donors must wait 16 weeks between donations. Platelets can be donated every 2 weeks

If you’re 17 or over, in general good health and want to help save and improve lives, visit www.blood.co.uk or call 0300 123 23 23 to find a session in England or North Wales near you to give blood.  Platelet donors can donate at one of our 24 donor centres across England.www.blood.co.uk/platelets.

There are also apps available for Android and Apple Smartphone and tablet devices which enable donors to search for their nearest blood donation session.

Mr Richard Buck aged 50 from Wakefield was first inspired to donate blood over 28 years ago by a work colleague. He has been a regular donor ever since.

Josh Hartley age 21 from York grew up with the knowledge and understanding that his mother had helped save many lives over the years from her regular blood donation.He has been donating blood himself for the last 2 years.

Trevor Hinchliffe aged 47 from Morley has now made over 100 platelet donations over a 4 year period. His father was a regular blood donor and was awarded the gold badge for 50 whole blood donations.

David Copes from South Elmsall, needed 40 units of blood after receiving horrific injuries in a hit-and-run motorcycle accident near Leeds in 2007. Now aged 62, David broke his neck, back, pelvis, both legs, ribs, foot, jaw, collar bone and hand in the crash, along with sustaining serious injuries to his kidneys, bladder, liver and lungs and spent six months in hospital. Father and grandfather, David, is still not fully recovered but spares time to help NHSBT promote blood donation.

David said: ‘I broke 40 bones altogether and died on the tarmac before paramedics revived me. During the following operations, I died again twice. I received 40 pints of blood within the first few hours of being admitted – I broke two femoral arteries and fractured my pelvis in five places. My liver was pouring out blood.

I gave blood before the accident. I can’t do it now, because of the transfusion I’ve had. My advice is: don’t think, just do it, because you never know what life’s got in store for you. You may need blood for yourself in a week or a year’s time, or you may never need it. If I hadn’t had it, I wouldn’t be here – I’d be dead. It’s as simple as that.’

Sheffield youngster Olivia Collinson-Wallace received 28 units of platelets and 39 units of red blood cells during her four-year treatment for leukaemia.

13-year-old Olivia and her mum Marie Collinson-Wallace regularly speak at award ceremonies for veteran blood donors in order to thank them for their dedication.

Marie said: “So many donors tell me that it brings it home to them what a difference it makes to see Olivia standing before them, being able to think about her aspirations and what she wants to achieve.

“This is thanks to the consultants, the hospital and the blood donors. That is all the proof that donors need that their dedication was worth it. What they achieve is no mean feat, it’s dedication and generosity that makes that difference.”