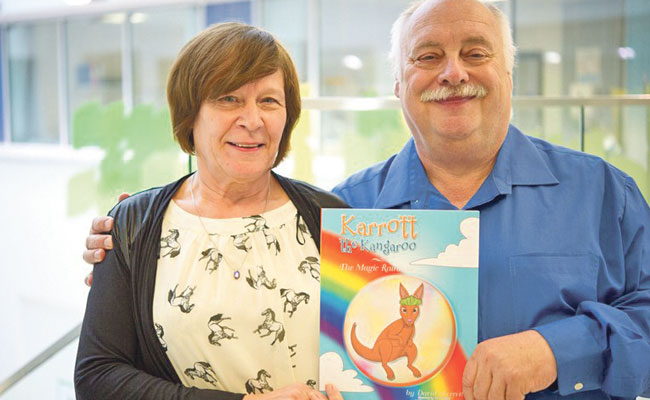 The colourful illustrated book , intended for parents to read with their children or for older children to read on their own, fulfils a long-standing ambition for David, as family and friends had been urging him for years to write down his imaginative tales.

David, who works at St James’s University Hospital, explained: “After my son, John, was born I started to tell him bedtime stories, and the ones he liked best I used to make up in my head, and I gradually developed a character of a kangaroo called Karrott, whose name came from his green hair, and the adventures he had in Australia.”

In his first book, Karrott the Kangaroo – the Magic Rainbow, David recounts the story of how Karrott goes kite-flying and becomes entangled with a rainbow which transports him to the magic land of Wobniar on the other side, and the fun characters he meets there who finally help him get home.

David’s wife, Carol, who works in Salaries and Wages at the hospital, and now-adult son John also helped with the book, and John’s friend Cheri Fletcher helped develop the look of the different characters, which were then turned into professional artwork by the publishers, Xlibris.

“I’d been talking about doing a book for years, and my late father-in-law Raymond Turner was always telling me I should go into print, so I’m feeling proud that I finally did it, David added. “When I saw the finished book I felt really giddy and I hope parents and children will get as much fun out of the stories as we did.”

David, who lives in Stourton Grange, is due to retire from work this summer after 30 years at the hospital, firstly as a porter and then in security. He already has plans for follow-up books as he has lots of adventures about Karrott in his head, and is also considering the possibility of the little kangaroo becoming a children’s cartoon character.
The book is already available on Amazon and David is also selling copies personally, with a contribution of the proceeds going to the Leeds Teaching Hospitals Charitable Foundation.