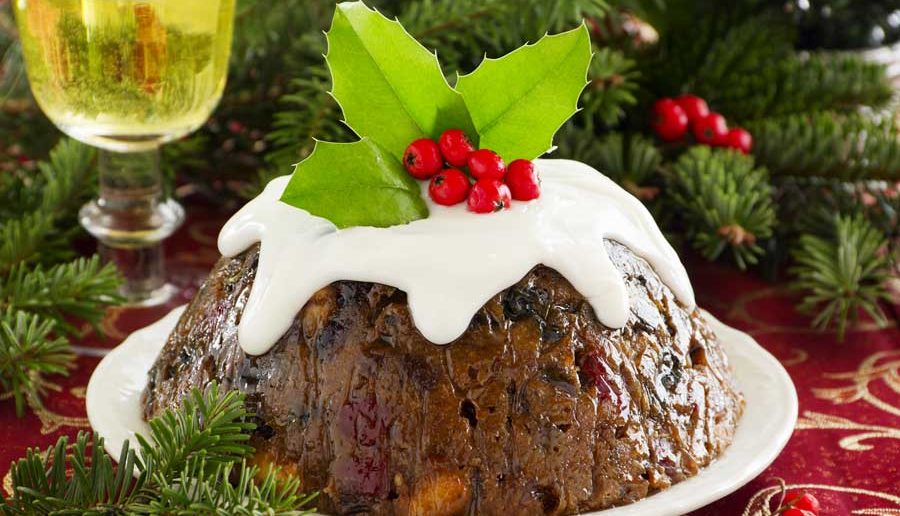 Christmas Day is a day of celebration for Christians everywhere, filled with joy and peace. In the UK, a traditional Christmas Day involves presents, decorations and a lavish dinner with all the trimmings. Part of this dinner, love it or hate it, is the Christmas (or plum) pudding.

The origins of this divisive dessert were nothing like the pudding we love or loathe today. In the 14th century it was called ‘frumenty’ (a type of pottage) and sounds quite revolting! Made with beef, mutton, raisins, currants, prunes, wines and spices, it was made to a soup like consistency and was eaten as a fasting meal in preparation for the upcoming festivities. By the late 1500’s, it had developed more into a plum pudding having been thickened with eggs, breadcrumbs and dried fruit. It was also given more flavour with the addition of beer and spirits. Another 50 years later and it had become the customary Christmas dessert in England.

By the Victorian period the plum pudding was similar to what we eat today, and superstition said that the pudding should be made with 13 ingredients to represent Jesus and the Disciples, and that every member of the family take turns to stir the mixture from east to west, to honour the journey that the Magi took in order to meet the new baby Jesus – and to bring them luck for the following year. Many puddings were made on ‘Stir-up’ Sunday. This tradition stems from the Church of England’s Book of Common Prayer. The collect for the Sunday before Advent begins ‘Stir up, we beseech thee, O’ Lord, the wills of thy faithful people; that they, plenteously bringing forth the fruit of good works…’

The puddings were initially shaped into a ball and boiled in a cloth. If the pudding was a bit heavy it was called a cannonball! In wealthier households, this method eventually gave way to steaming in a pudding basin, or elaborate mould, often in the shape of towers or castles. The pudding was decorated with a sprig of holly on top. In the Middle Ages, holly was thought to bring good luck and have healing powers. Used as a decoration on the dessert in the Victorian era, it was to represent Jesus’s crown of thorns. Christmas pudding was served with a sweet custard or hard sauce (brandy butter), and was made by rich and poor alike, although the poor may have substituted some of the fruit with vegetables and made theirs with cold tea instead of alcohol. Charles Dickens summed up the Christmas pudding as a traditional Victorian dish in A Christmas Carol; ‘In half a minute Mrs Cratchit entered – flushed, but smiling proudly – with the pudding, like a speckled cannon ball, so hard and firm, blazing in half a quartern of ignited brandy, and bedight with Christmas Holly stuck into the top. Oh, what a wonderful pudding!’

Much like twelfth night cake, trinkets could be hidden in the mixture, but most common was a silver coin to bring luck to the person that found it. The first coins used were a silver farthing or penny, and after WWI it became a threepenny bit, then later a sixpence. Today, many of these traditions remain, although many now buy their pudding from the supermarket.

It is easy to forget sometimes that everything has a history – including the food we eat. If you can’t stand the stuff and pull a face at the Christmas dinner table, remember that it could be far worse. You could instead be eating a Medieval soupy concoction of savoury meat combined with sweet ingredients – yuk!