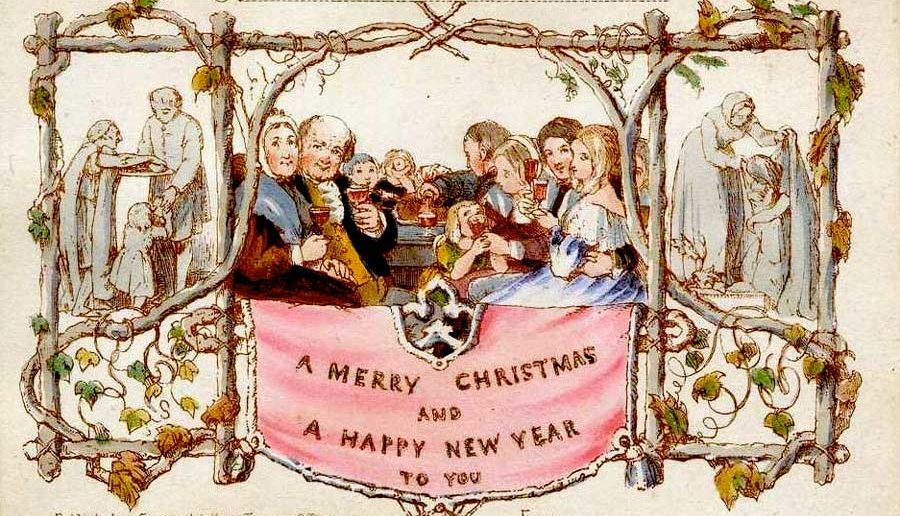 THE HISTORY OF CHRISTMAS CARDS

By yorkshire reporter on 07/12/2018 0 Comments
■ The world's first commercially produced Christmas card, made by Henry Cole 1843

Every year millions of pounds are spent on buying and sending Christmas cards to friends and family, but how did all this start and by whom?

This yearly custom was credited to Henry Cole born in 1808, later Sir Henry the founder and director of the Victoria and Albert museum in London. It was he who came up with the idea of sending cards at Christmas along with his friend John Horsley an artist. Between the two of them, they designed the first card selling them for a shilling each, equal to five pence in today’s money.

Henry Cole was a prominent civil-servant, inventor, educator and was instrumental in founding our postal system and setting up the Uniform Penny Post which encouraged the sending of Christmas greetings on decorated letterheads and visiting cards.

In the Cole household it was a busy time and unanswered mail would pile up and a time saving idea was needed and Cole decided to consult his artist friend John Callcott Horsley to illustrate his thoughts.

“In the Evg Horsley came and brought his
design for Christmas Cards.”

The design shows three generations of Henry Cole’s family raising a toast hand coloured in the middle of three panels. The other two panels showed a decorative trellis with black and white scenes showing acts of giving and the last one showed a child partaking of a glass of wine which didn’t go down too well with public opinion.  A printer was employed by Cole to transfer the design on to cards. A thousand copies were made that had space for a hand-written message. The card was personalised by Horsley for Cole by drawing a self portrait and not his signature. It was also dated “Xmasse 1843.”

The card was published and cost a shilling to buy, quite a price for the time and proved a failure in commercial terms. This was a time of change which included Prince Albert introducing different Christmas traditions from his native Germany to Britain, including of course the famously decorated Christmas tree.

In 1848 a second Christmas card was designed by the artist William Maw Egley which was once thought to pre-date Horsley’s card because the date was read incorrectly as 1842. The design was much like the first card and depicted middle class people enjoying themselves and was approximately the size of a Victorian lady’s visiting card.

Over the years, printing methods improved and by 1860 Christmas cards became very popular and were made in large numbers.

They became cheaper too reducing in price to a halfpenny which enabled the least well off in society to buy them. Early cards displayed what Christmas was all about, scenes of the Nativity and later everyone’s favourite, the Robin.

In America, Christmas cards made their debut in the late 1840s but were expensive. The famous sharpshooter, Annie Oakley who toured with Buffalo Bill’s Wild West Show visited Glasgow at Christmas 1891 sent cards back to America to family and friends featuring a photo of her on it and wearing tartan. She was said to have designed the card herself and had it printed locally.

These days cards have all kinds of designs including ‘jokey’ ones and of course, Santa himself features heavily on cards as well as wintry scenes and romantic times of long ago.