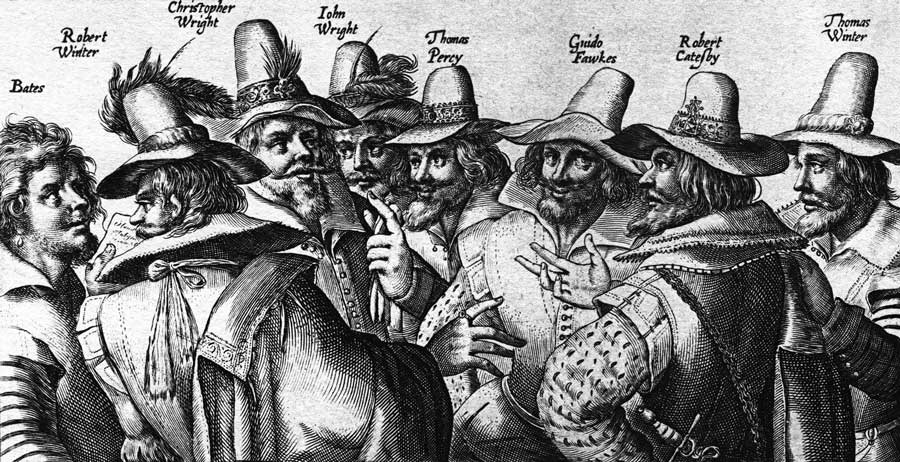 ■ A contemporary engraving of eight of the thirteen conspirators, by Crispijn van de Passe. Missing are Digby, Keyes, Rookwood, Grant, and Tresham
Features

By yorkshire reporter on 02/10/2018 0 Comments
■ A contemporary engraving of eight of the thirteen conspirators, by Crispijn van de Passe. Missing are Digby, Keyes, Rookwood, Grant, and Tresham

At the beginning of November across the country we celebrate Bonfire Night. We light bonfires and let off colourful fireworks to celebrate the foiling of the gunpowder plot all those centuries ago, but it is important to remember that while the event is seen as a fun and celebratory evening, it has a sinister origin. The 15th century was a very difficult time in England if you were of a different faith to the crown. This was not a time of diversity and acceptance as today, and many people were persecuted for their religious beliefs. This month I tell you a little about Guy Fawkes, the most famous of the gang who was born and raised in York.

It is assumed that Guy Fawkes was born on the 13th April 1570 from the date of his baptism at St. Michael Le Belfrey which stands in the shadow of the majestic York Minster. We do know that he was born in York on the site where the Guy Fawkes Inn now stands in High Petergate. When Guy was 8 years old his father died, and his mother married a Catholic man. Because of this, and surrounding influences from extended family and education, Fawkes converted to Catholicism. In October 1591, he sold his inherited estate in York and travelled to Spain to fight for them in the Eighty Years War where he was known as Guido. In 1604, he became involved with a small group of English Catholics led by Robert Catesby, upon introduction by his former school friend and Jesuit Priest Oswald Tesimond. It was his battle-hardened imposing physicality, combined with the fact that Tesimond knew Guy to be a pleasant, loyal and pious man that attracted the group to recruit him in what we now know as the Gunpowder Plot. Although he is by far the most famous plotter he was far from the mastermind behind it. He did however, play the most crucial role in the plan.

The plan was to kill the King and members of Parliament, replacing him with his daughter Elizabeth by blowing up the Parliament House after which minor nobles who were Catholic or pro-Catholic would rise and take control of the government. The plotters acquired the lease to a room directly underneath the House of Lords where they began to store barrels of gunpowder in time for the opening of Parliament when the king would be present. Unfortunately for them, the establishment found out about their operation as they involved too many people, warning certain Catholics not to go to Parliament that day. Suspicions were raised, and, on the 5th November, King James ordered the cellars underneath Parliament to be searched. Fawkes had stationed himself in the cellar with a slow match and a watch. He was found leaving shortly after midnight and arrested. The establishment found 36 barrels of gunpowder hidden under piles of firewood and coal. Parliament was subsequently delayed until 9th March the following year.

Guy gave his name as John Johnson and all he would say was that he was a Catholic from Netherdale in Yorkshire and he was 36 years old. When questioned further he said he had intended to blow up the king and the lords and he had no regrets except for the fact that he hadn’t succeeded. The ‘devil and not God’ was responsible for the discovery of the plot. He repeated his words in front of the king and even told some of the Scots present that his intention had been to blow them back to Scotland! Even King James could not fail to be impressed by his resolution. The king allowed torture to be used to find out more and stated, ‘the gentler tortures are to be first used unto him, and by degrees preceding to the worst’. Because the plot had been foiled, there was no uprising. Guy at first held up to the tortures to buy his fellow plotters time to get out of the country. The establishment transferred him to the Tower of London and eventually broke Guy’s body and spirit, he admitting his name was Guy Fawkes.

His signature still survives on the end of his confession – looking so scribbled it can only be imagined he was in severe pain when he signed it.

Abandoned by the promised support, Catesby and some fellow plotters took a last stand at Holbeche House, Staffordshire in which Catesby and several others were killed with the remainder captured. The trial of eight plotters began on 27th January 1606 at Westminster Hall where they were displayed on a purpose-built scaffold. They were found guilty of high treason. The eight condemned men were put to death over two days – four on the 30th January at St Paul’s Cathedral, and four including Guy Fawkes on the 31st January at Old Palace Yard, Westminster. All were dragged by horse to their place of execution on a hurdle and then each was hung for a very short time before being castrated, disembowelled, and finally decapitated. Their dismembered bodies were not buried but left out for the birds to eat.

As for Guy Fawkes, he was already dead before this ordeal as when he climbed the ladder up the scaffold he slipped off and broke his neck – possibly an accident due to his weakness from all the torture, or possibly he took the opportunity for a quick death. Either way, it was a macabre death for the other plotters, and a severe message to the rest of the Catholic population living in England at the time.