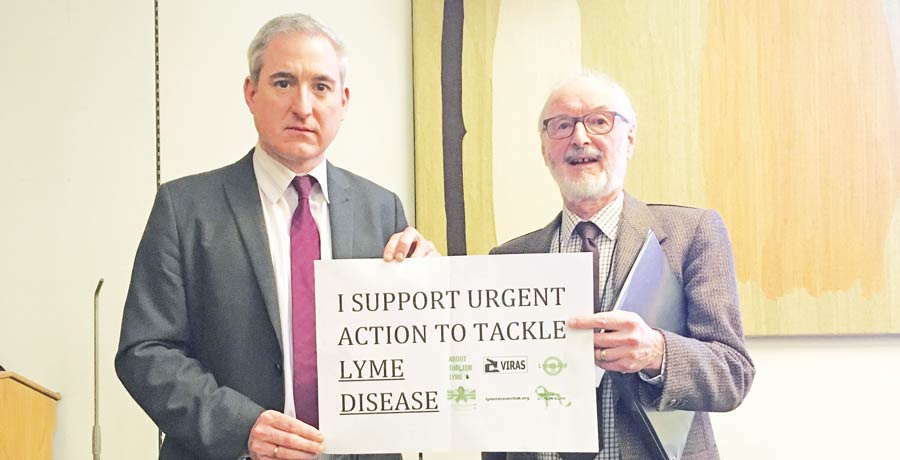 Leeds North West MP Greg Mulholland is backing a campaign to raise awareness of Lyme Disease. This follows Greg’s previous work on awareness of rare diseases and provision of drugs.

Up to 3,000 cases of Lyme Disease are reported in England and Wales every year. Despite this, public knowledge of the symptoms and effects is not as widespread as it should be. Now Greg Mulholland MP is supporting a campaign to change that.

As part of the campaign, a Drop-In Session for MP’s was held in Parliament at which MPs could learn more about the disease, from how it can be contracted to early symptoms and what sort of medical attention should be sought. This was attended by figures such as Michael J. Cook, who has done much research on the disease and continues to campaign for better public knowledge of its effects.

The disease is spread by ticks, tiny spider-like creatures found in woodland and heath areas which feed on the blood of birds and mammals, including humans. In the early stages, many sufferers will develop a distinctive circular rash where the bite has occurred, though this can take up to 30 days to appear and as many as 30% of sufferers may not exhibit this rash. Other symptoms can include; flu-like symptoms in the early stages, tiredness, muscle pain, joint pain, headaches, a high temperature (fever), chills and neck stiffness.

If left untreated, more serious problems can occur such as; pain and swelling in the joints, problems affecting the nervous system and heart problems. If detected early, a full recovery is usually made. This is why public knowledge of symptoms is so important.

As a keen walker and member of the Long Distance Walkers Association which can see him walking through many of the types of areas that ticks inhabit, Greg has a particular interest in raising awareness of Lyme Disease.

“It is very important that people are aware of the risk of catching Lyme Disease when out and about, whether walking in the countryside or just walking their dog in local woodland. Lyme Disease is a nasty disease which can have serious long term effects and it is vital that people know how to do all they can to prevent infection from ticks and also how to spot signs that they may have been bitten. There also needs to be more awareness of the challenges those who have contracted Lyme Disease so that people better understand the effects of this debilitating disease”.

The next aim is to form an All Party Parliamentary Group (APPG). Deb Collins, who helped to organise the event and campaigns to raise awareness of Lyme Disease, commented saying,

‘’We were delighted at the amount of support we received from MPs and Peers for an APPG. The objectives of the APPG will be to bring about improvements in the handling of Lyme Disease in order to adequately address what is becoming an increasingly pressing risk to public health.’