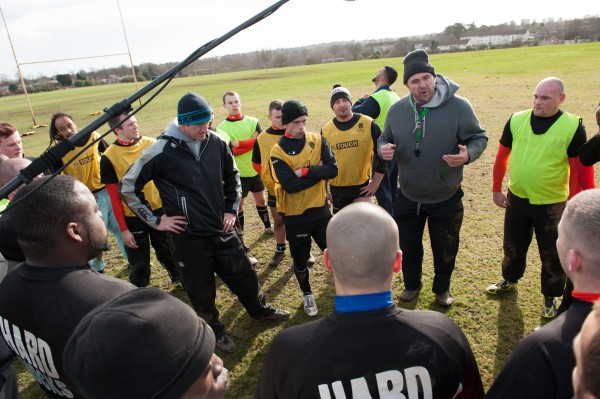 Rory Child, who graduated in 2010 with a degree in Film & Moving Image Production spent seven weeks filming in Birmingham to produce the seventh series of ‘School of Hard Knocks’, which follows a group of local unemployed men lacking in motivation.

The show is presented by rugby legends, Scott Quinnell and Will Greenwood, with guest stars including Prince Harry, who take on the challenge of teaching the men rugby and interview skills before trying to get them jobs at the end of the series.

Rory commented: “Sport is the greatest leveller, it doesn’t matter what your background, when you walk out on the pitch you need your team mates beside you, otherwise you’re going to come off worse. That’s where Scott and Will come in, using rugby they re-motivate the unemployed young men giving them a focus and restoring their confidence.

“We finished filming at the end of March and since then a lot of the boys have now found full or part time work; others have got training in various trades. A lot of them carry on playing rugby and acquire rugby coaching qualifications after we leave to fill that void.

As well as rugby and fitness training, the participants take part in a series of one-off experiences with influential mentors that are aimed at developing their life skills. Prince Harry joins the participants for training and job interview rehearsals. A visit from former England age group international, Matt Hampson, inspires the boys to have a more positive outlook in life and England Rugby Head Coach and fellow Leeds Met graduate, Stuart Lancaster, makes a guest appearance to lead a warm up session and shirt presentation, giving the boys some extra motivation.

Will Greenwood, co-presenter and coach of School of Hard Knocks, commented: “Over 70% of the participants from this year are now in the process of obtaining a job. I have no doubt at all that the visits from Prince Harry, Hambo and Stuart Lancaster had a massive impact on this. Prince Harry was great with the boys and really got stuck in which helped raise everyone’s game, both on and off the pitch.”

Rory held a part-time job at Sky Sports whilst studying at Leeds Met and was offered a full-time job with them in the rugby department on his graduation. Since leaving university, he has worked on many outside broadcasts. Last year he worked on the sixth series of ‘School of Hard Knocks’, which was based in Glasgow.

Rory added: “The Northern Film School at Leeds Met was great preparation for working in the industry. The best bit about it is you gain an understanding of every department within the industry.

“My advice to current students is to surround yourself with likeminded individuals, don’t pigeon hole yourself into what you think you want to do, you never know you might be a great cameraman even if you have more ambitions of editing.