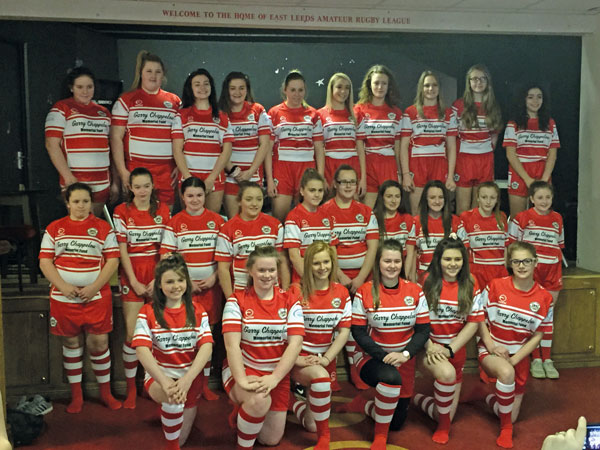 Girls Rugby, In A League Of Their Own
Rugby

Girls Rugby, In A League Of Their Own

Rugby league is a huge part of the sporting heritage of the north of England. Many Yorkshire men have grown up playing the sport from a young age and now grace the grass roots clubs as coaches or ardent supporters of their sons who play. Our county boasts some top class teams of course including the Rhino’s and Hunslet Hawks here in the city of Leeds.

But what about the girls? In general, there is very little on offer for girls wanting to play rugby. For boys, there is a good development path including scholarships for them to enter the Superleague academies at the age of around 15/16 but nothing of the sort exists for females – even the England Ladies squad are playing at amateur level!

There are local clubs trying to change this though, and one of them is East Leeds Community Sports Club. Back in December 2013 Dean Gledhill started a girl’s rugby team with just eight girls – three of them being the coaches’ daughters. Chairman of the club Peter Longbottom was extremely helpful to the enterprise by welcoming the girls and allowing them to train at the club for which Dean is incredibly grateful.

The girls started off playing friendlies and festivals as no girl’s league existed. This too has now changed thanks to a couple of forward thinking coaches who along with Dean, created a Yorkshire league for U15’s. The league proved to be popular and has now become the North League with 10 clubs from Yorkshire and Lancashire participating. Having just had the first half of the league season, they are now planning to introduce the U14’s too.

The original number of eight girls has swelled to a fantastic 40 at the club! There are three age groups – U12’s, U14’s and U16’s and a ladies open age team has just started with 12 ladies training. In the summer months the females train on a Tuesday and Thursday evening from 6-7:30pm, and in the winter months they have been kindly offered the use of Corpus Christi High School’s gym.

The girl’s squad at East Leeds is certainly going from strength to strength but all teams are in desperate need of sponsorship in order to continue to move forward. The Community Sports Club in general needs assistance be it financial or practical.

It is a great hub for sport including rugby and football for the local area. Situated on Easy Road, the club has a more promising future after closing down around 4-5 years ago. The sports teams all had to rely on hospitality from other clubs and pay to use council facilities for training sessions – it was a difficult time. Eventually, the teams managed to purchase the social club and refurbish it so that it could be used again but there is still much more needed to do to ensure it has all the amenities needed not only for the teams based there but to reach its full potential as a community resource.

If you are interested in joining the girls rugby or any of the other sports teams, or feel you are able to assist the club in any way please contact them via email at Eastleedsgirls@gmail.com