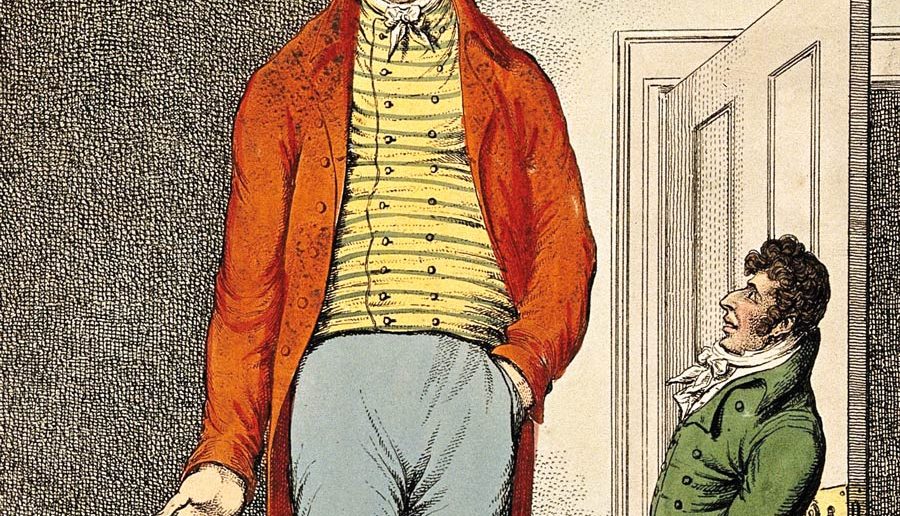 Since the mid nineteenth century statistics have shown that the average height for a man age twenty-one between 1871 to 1875 increased from 5 feet 5 inches to 5 feet 10 inches in 1971 to 1975. The data could only look at male height unfortunately due to lack of information on the average height of females.

America had Robert Pershing Wadlow in the 1930s, the tallest human in recorded history at 8 feet 11.1 inches, but Yorkshire had its own ‘giant’ who grew to 7 feet 9 inches in the form of William Bradley born in Market Weighton in East Yorkshire on February 10th 1787.

To strike a balance, the tallest woman was Sally Ward known as the ‘Yorkshire Tower’ most probably born in Sheffield and might have lived in Leeds at some point as an orphan. She was exhibited at ‘Austin and Stone’s Museum in Boston in America and billed as the tallest woman on earth at a staggering 8 feet 2.5 inches. Little is known about her unfortunately and more research is needed.

At birth William Bradley weighed in at 14 pounds, a bit of a whopper to say the least and part of a family of thirteen children who grew to be average height apart from a sister who was quite tall but died in an accident. His father, a tailor by profession was a mere 5 feet 9 inches tall. His schooldays were quite challenging at times especially with fellow pupils. They would tease him but occasionally the tables would be turned when the teacher would instruct him to punish some of the more disruptive pupils by lifting them up to the high cross beams in the classroom and ‘abandon’ them there until such time they decided to behave.

After leaving school he assisted the local butcher and being the size he was, his appetite was enormous. He could easily down a leg of mutton and vegetables at one sitting. Later he went into farm work, but that proved disastrous for the farm implements which would break, and new and more robust tools were made for him. He once took a bet on that he could fill a wagon with manure quicker than two average sized men could. He did this with ease finishing long before the other two men.

The famous Barnum’s travelling show came to Market Weighton one year and they found out about William and offered to take him on their shows around the country. After a while, he began to think he could make more money on his own after Barnum’s failed to share some of the profits, so he started travelling on his own. He would hire a hotel room charging a shilling for folk to see him and even King George III was also a fan and honoured William with the gift of a gold watch.

William’s lifestyle began to tell on him and eventually he returned to his home at Market Weighton to live out his final days. He died on the 30th of May 1820 at the young age of thirty three, originally buried in the churchyard. His coffin measured nine feet long and three feet wide. It was later feared that his body could be ‘snatched’ so he was exhumed and re-interred inside the church. Later, in 1872 renovations were carried out in the church and a rumour spread that his remains had been taken away at some point, so the grave was opened revealing  thigh bones measuring twenty-four inches and lower leg bone twenty-one inches. His remains were then re-interred inside the church where a memorial can be seen today.

Next month in the ‘Yorkshire Reporter’ I will tell the quaint story of Henry Jenkins who lived at Bolton on Swale and was said to have lived to be the oldest Yorkshireman ever.