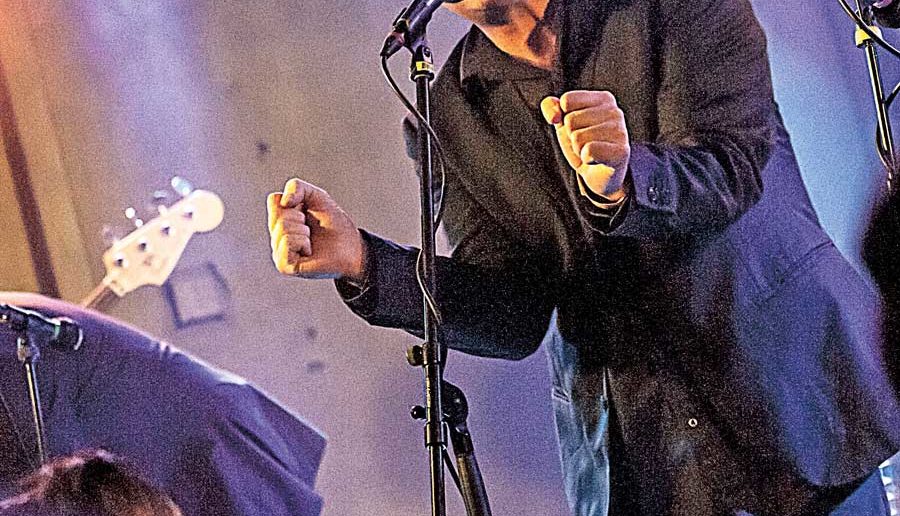 If Craig Finns genius was reflected in record sales the guy would be the biggest selling artist on the planet. This is clear from his work with the band The Hold Steady. A band who painted lush landscapes of modern-day America. Now a solo artist Finn is still painting pictures of his country, but these are now about the people: perfect musical portraits of the lives lived by his fellow Americans. All laid bare before an appreciative and captivated full house at The Brudenell.

The live dates were in support of I Need A New War which saw Finn backed by his touring band, The Uptown Controllers. The third album in a trilogy (following 2015′s Faith in the Future and 2017′s We All Want The Same Things), I Need A New War once again sees Finn expertly chronicling our complex, often confusing, modern era.

He draws deeply felt character studies about regular people trying to respond to extraordinary times, attempting to find connection whilst wondering how to keep pace with a world moving faster than they are. The LP further finds Finn focusing his lens on New York City – his home for the last 18 years. All of this backed up with a performance of such passion and exhilaration that it stays with you long after the house lights have gone up!

Also, at the Brudenell were Chastity Belt whose energy is like a circuit, circling around the silly and the sincere. Theirs is a long-term relationship, and that loop sustains them. Tongue-in-cheek witticisms and existential rumination feed into each other infinitely, as long as they’re together. That’s a creative thesis in and of itself, but isn’t that also just the mark of a true-blue friendship?

The band talks a lot about intention these days—how to be more present with each other. The four piece—Julia Shapiro (vocals, guitar, drums), Lydia Lund (vocals, guitar), Gretchen Grimm (drums, vocals, guitar) and Annie Truscott (bass)—are nine years deep in this, after all. It seems now, more than ever, that circuit is a movement of intentionality, one that creates a space inside which they can be themselves, among themselves. It’s a space where the euphoria of making music with your best friends is protected from the outside world’s churning expectations. After touring Chastity Belt’s last record ‘I Used To Spend So Much Time Alone’ (2017, Hardly Art), the band took a restorative few months in 2018. So, when they reunited ready to record ‘Chastity Belt’, things had changed – Annie had moved to LA, they’d all been in and out of relationships and their perspectives had shifted. They came together with more intention and assertion than ever before. And boy does this add up to a rather wonderful way to pass a couple of hours. Many of Chastity Belt’s signature dynamics were on show, from the silly to the sincere, which have been read as feminist gestures: the shrugging off of the “women in rock” press, the fundamentally punk act of creating music on your own as a woman, and being lyrically forthright. What the live show of ‘Chastity Belt’ reveals is that the band has tapped into a deeper tradition of women making art on their terms: the act of self-preservation in favour of the long game. In favour of each other. In this cultural moment, taking space like this to prioritise the love over the product seems progressive. Chastity Belt’s intentions have resulted in an album deeply expressive of four people’s commitment to what they love most: making music with each other.

To end a trio of three vastly differing nights at the same venue were Intergalactic ravers HENGE (The alien joy mongers) on their latest adventure; The aim of these experimental gatherings is to explore the potential of Cosmic Dross to alter psychological and physiological states in human beings. Cosmic Dross is a sacred sonic art form created by HENGE. Unfortunately for Earthlings, there are currently no human words that adequately describe how it sounds – although it features thundering drums, clothes-shredding bass, whacked-out synths, and singing that lays bare the joy of life. Since landing, they have witnessed how the sounds stimulate extreme positivity in humans. It is something that needs to be seen to be believed and thoroughly enjoyable it is too