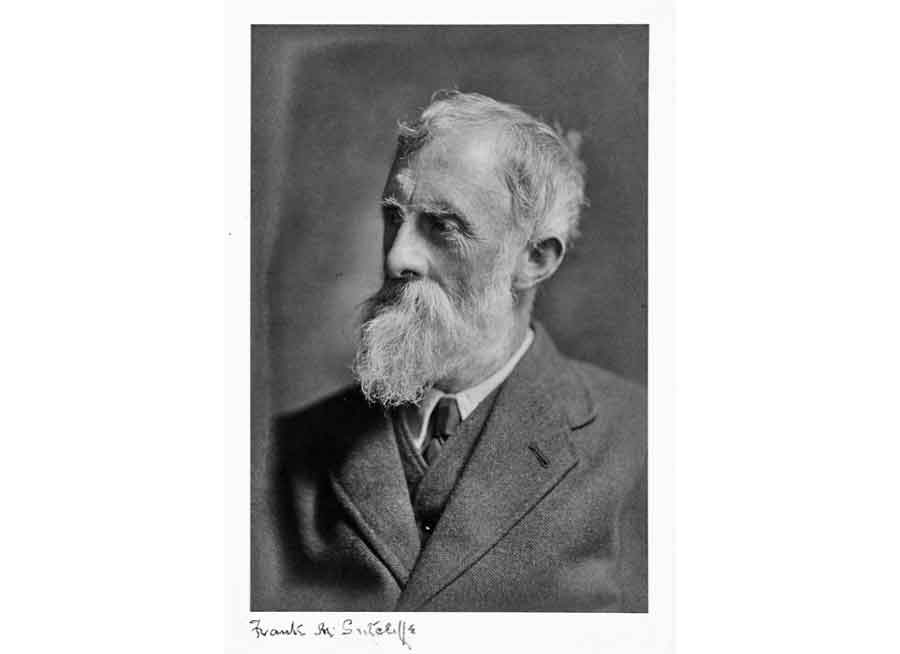 Forever associated with Whitby and Yorkshire’s east coast, photographer Francis (Frank) Meadow Sutcliffe was born in Headingley, in 1853. His father Thomas was a landscape painter and a member of the ‘Institute of Painters in Water Colours. Thomas encouraged his children to put their talents to good use, producing illustrated story books on his printing press.

When Frank was a small boy his parents found him hiding inside a camera after the bellman had carried him around the village. Thomas thought this rather funny and said;
“Frank, I think you will have to be a photographer.”
Frank showed an interest in photography and Thomas cleared half of the hayloft to make a darkroom and gave him a large mahogany camera. Frank’s early education was almost non-existent, starting at a ‘Dame School’ run by a Miss Riley. All he could remember was that Miss Riley combined teaching with cooking which often resulted in pans boiling over creating an odour, which became known as ‘Miss Riley’s smell.’
Frank’s next school was run by a Dr Brewer. From an educational point of view he didn’t leave a great impression on him. Frank’s hair at this time turned from a golden colour to ‘carroty’ red and as children can be cruel he became known as ‘carrots.’ Firstly, the nickname was taken in good part, but as time went by, it irritated him and he once came home with black eyes. It’s not known whether he won or lost the fight but the bullying stopped.
Describing himself as ‘born by the roadside’, up to being fourteen, he accompanied his father picking blackberries, tickling trout and all other manner of outdoor pursuits. This idyllic lifestyle wasn’t to last and he was sent to work at Tetley’s Brewery to train as a clerk, but after finding a book on photography he showed interest with support from his father.
His teenage years were spent mastering the art of wet-plate photography, taking pictures of friends and neighbours. His mother must have been pleased with his new career because according to him she would:
“Have me smothered like the Princes in the Tower if I showed any inclination for being an artist. She thought all artists little better than lunatics and for years I used to dream that a man was coming to smother me.”
Frank’s father, an outstanding artist received commissions from the Earl of Harewood, the Marquiss of Ripon, and was also asked by the Dowager Marchioness of Normanby to paint some of the grounds of Mulgrave Castle, and as usual, Frank would accompany his father. Early in 1871 the family moved from Leeds to Aislaby near Whitby.
Romance was about to come into Frank’s life. One morning at the castle, the Marchioness became anxious when the mail didn’t arrive with the usual postman. Instead, a girl walked up the drive carrying the mailbag. The Marchioness asked Frank to go fetch her to find out what had happened. The girl said that she worked for the Whitby Post Office, her job was to give the carrier the mail for Mulgrave. That morning, she had forgotten to give him the mail and tried to catch him up at Sandsend but failed and had to bring it herself. She asked the Marchioness not to be too hard on the man because it was her fault.
The girl, Eliza Duck, impressed her and Frank was asked if he would take her to the housekeeper for breakfast. Frank would eventually marry Eliza.
Frank’s father died from heart disease at forty-three in December 1871, and thanks to his earlier suggestion that Frank take up photography as a career, he began to take work seriously and try to earn a living. His father’s friends commissioned him to photograph parts of the Lake District. Francis Frith, the head of a photographic company gave him work photographing views of the North Riding.
Views of the countryside were becoming popular and after a rainy day at Rievaulx Abbey struggling to take pictures, he managed to get some decent exposures and sent them to a friend, also catching the attention of the writer John Ruskin who lived in the Lake District. Ruskin was impressed and he invited Frank to his home to do some work for him.
His workload increased and he now wanted to marry Eliza, and did so in 1875. Having been told that Tunbridge Wells was an ideal place for a photographer to earn a good living, they moved there. In the 1870s photographers would have to set up studios and take portraits, and there were many who had moved to the same area searching fame and fortune. Unfortunately for Frank, there wasn’t enough work to go around so the couple returned to Whitby in 1876 and within a few years they had five children.
With what money he had, Frank rented part of a jet workers shop, turning it in to a studio. It wasn’t ideal as the shop was situated in Waterloo Yard, a smelly back alley and on sunny days those who came to have their portraits taken would often faint!
Business built up slowly as a portrait photographer, and over the years, people would brave the stairs to his studio to have their picture taken. Like today, there would be work in photographing children and also other sitters which stretched right across the social scale, from the Archbishop of York to a humble ploughman.

In the summer, and as Whitby became more popular, he would spend hours working in his studio. When he eventually arrived home, he would continue to mount the photographs, working with Eliza throughout the night. He realised though, however many hours he worked, he couldn’t earn enough to see him through the rest of the year with only a short holiday season of about six weeks.
A friend later said that it was ‘reasoned desperation that made Frank take those evocative photographs of Whitby, its people and surrounding area, which was to make him famous the world over. Frank Meadow Sutcliffe died on May 31st 1941 age eighty-seven and was buried in Aislaby churchyard.
To see more photographs by Frank Meadow Sutcliffe visit The Sutcliffe Gallery at 1 Flowergate, Whitby, YO21 3BA or go to website at;
www.sutcliffe-gallery.co.uk