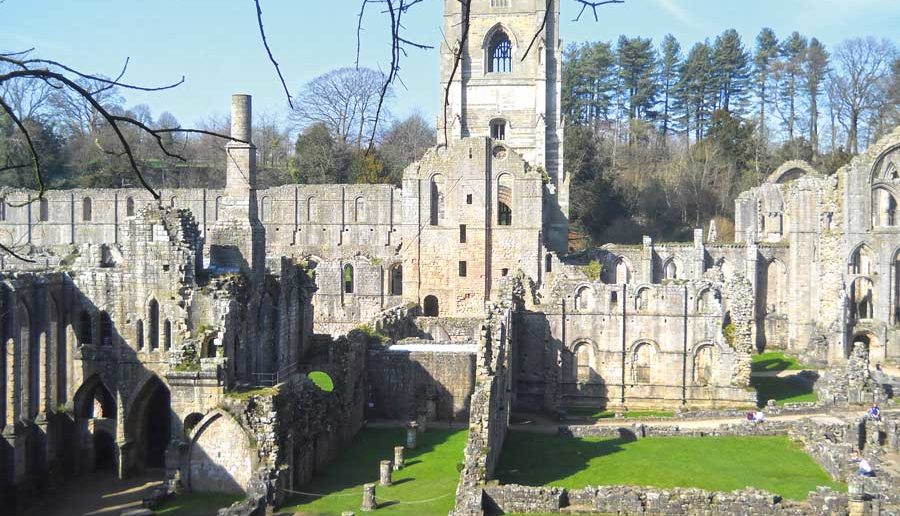 As the days brighten it is easier to get out and about in the sunshine to visit some of Yorkshire’s historical sites. One of my favourites is Fountains Abbey, one of the largest and best-preserved Cistercian monasteries in England and only a short drive from Leeds.

Fountains Abbey was run by monks for 407 years as one of the wealthiest in the country, until the dissolution in 1539. This hugely successful monastery was founded by just 13 monks in 1132 after they were expelled from St Mary’s in York following a dispute over the rowdy and extravagant lifestyle that the Benedictines had adopted. Desiring a more devout, simple lifestyle, they were provided land in the valley of the River Skell by Thurstan, Archbishop of York. The site was ideal, providing natural shelter from the elements, stone and timber for building and of course a supply of water. The monks survived a harsh winter and applied to join the austere Cistercian order. By 1135 Fountains became the second Cistercian house in the north of the country, following Rievaulx.

The early years of the abbey were not without problems. In 1146 Abbot Henry Murdac angered the public by opposing the election of William Fitzherbert as Archbishop of York and as a result, a mob attacked the abbey and burnt it down with only the stone church and some surrounding buildings surviving. The monks quickly bounced back though and the following year Murdac himself became the Archbishop of York. His resignation as abbot led to a period of instability for Fountains as the two succeeding him didn’t last long. The third, Richard, restored prosperity to the abbey as he held the post until his death in 1170. During his 20 years as abbot he embarked on an ambitious building programme, completing repairs and creating more accommodation for the growing population of the monastery. The rest of the 12th century led to the abbey’s reputation for caring for the poor and needy as they built shelters and provided food during the European famine of 1194.

The 13th century saw prosperity increase further as lay brothers helped Fountains Abbey become wealthy through the production of wool, lead mining, cattle, horse breeding and stone quarrying. Huge expansion of the abbey’s buildings continued. This period of growth and peace did not last though, as towards the end of the century they hit financial difficulties by forward selling its wool crop.

Their bad luck continued into the early 1300’s when the Scots invaded the north of England in frequent raids, and then the Black Death struck. The loss of manpower and income as a result led to near ruin for Fountains. Religious political conflict added further problems, but the abbey remained important.

A time of revival for Fountains Abbey was during the abbacy of Marmaduke Huby between 1495 and 1526. Much needed restoration work took place and Huby also built the great tower which shows his hope for the future of the monastery. Just a few years later though, the abbey was closed in 1539 on the orders of Henry VIII, with the inhabitants being sent away with pensions.

The crown sold the estate to merchant Sir Richard Gresham and it remained privately owned until the 1960’s, during which time the Studley Royal water gardens were designed which the abbey is now an integral part of. The National Trust bought the estate in 1983.

This World Heritage Site is an awe-inspiring place to visit with the abbey ruins looming up out of the valley. Well worth a trip out!