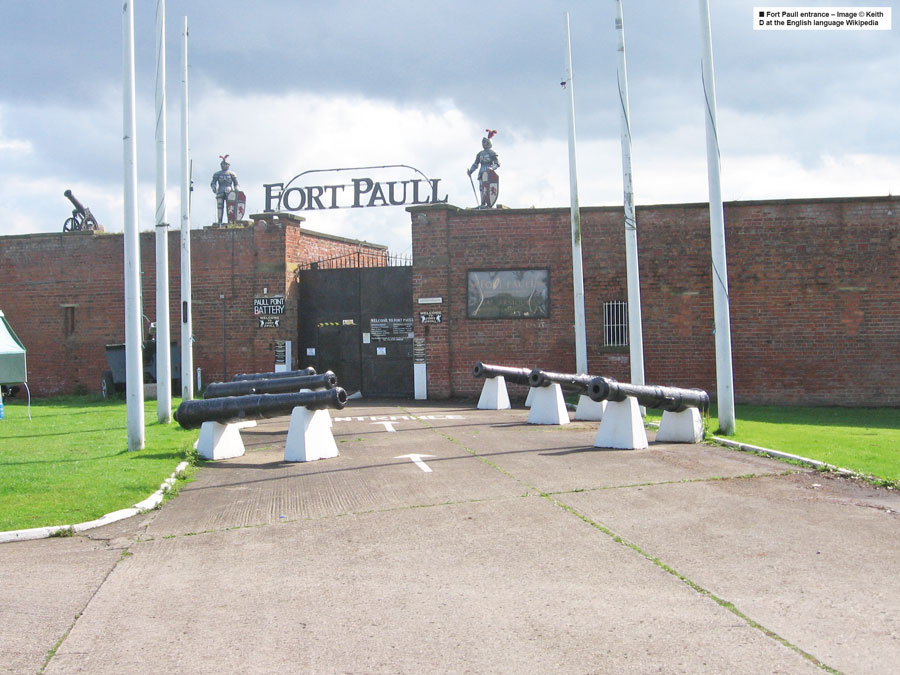 Fort Paull, located just outside the city of Kingston Upon Hull has an interesting past. There has been a fort on this site protecting access to the River Humber for around 500 years with the first recorded one being built by Henry VIII in 1542. There is nothing left of this earliest fort including any plans, but as Henry VIII was responsible for building several forts along the coast there are examples in other locations that give us a good idea what it would have looked like. Just before the outbreak of the English Civil War, King Charles I constructed the second Fort Paull. Unlike most of Yorkshire, Hull sided not with Charles but Parliament and denied him access to the city in 1642. He then ordered a fort to be built to the west at Hessle, and to the east at Paull in an attempt to cut off their supply routes. This siege failed but another began the following year. Hull was eventually relieved by two parliamentary ships but exchanges of cannon fire by the two opposing sides caused extensive damage to Fort Paull and destroyed the nearby parish church.
It wasn’t until the early 19th century when the River Humber needed to be defended again. The rise of Napoleon Bonaparte in Europe caused plans to replace the fort to be produced and in 1807 a new earthen fort was built. It became known as the Paull Cliff Battery and was garrisoned by 44 officers and men, and armed with 6x 24lb cannons. The Paull Cliff Battery was dismantled in 1822, after the defeat of Napoleon at Waterloo in 1815 removed the threat of invasion.
The fort that can be seen and visited today was finished in 1864. It stretches across an area of around 7 acres which is much larger than all the previous forts. It is in a pentagonal shape, built of brick and overlaid with earth. A 13ft ditch and rampart surrounds the fort. The original guns were replaced in 1895 with five concrete bunkers each housing 3 retractable guns and 2 quick firing guns. Between the two World Wars Fort Paull was used as a Territorial Army training base. After being used as an ammunition store during World War II the fort was abandoned until it was purchased by the Fort Paull Heritage Project in 1989, opening to the public in 2000.
The old accommodation blocks now display exhibits and artefacts for visitors, there is the underground spaces to explore and an assault course for children. The main attraction for visitors though is the world’s only surviving Blackburn Beverley cargo plane which sits on the parade ground. The fort is open to the public for the summer season and there are regular events taking place including a WW2 Spectacular Weekend over the May bank holiday.
Fort Paull is an interesting, intriguing place, and well worth a visit.