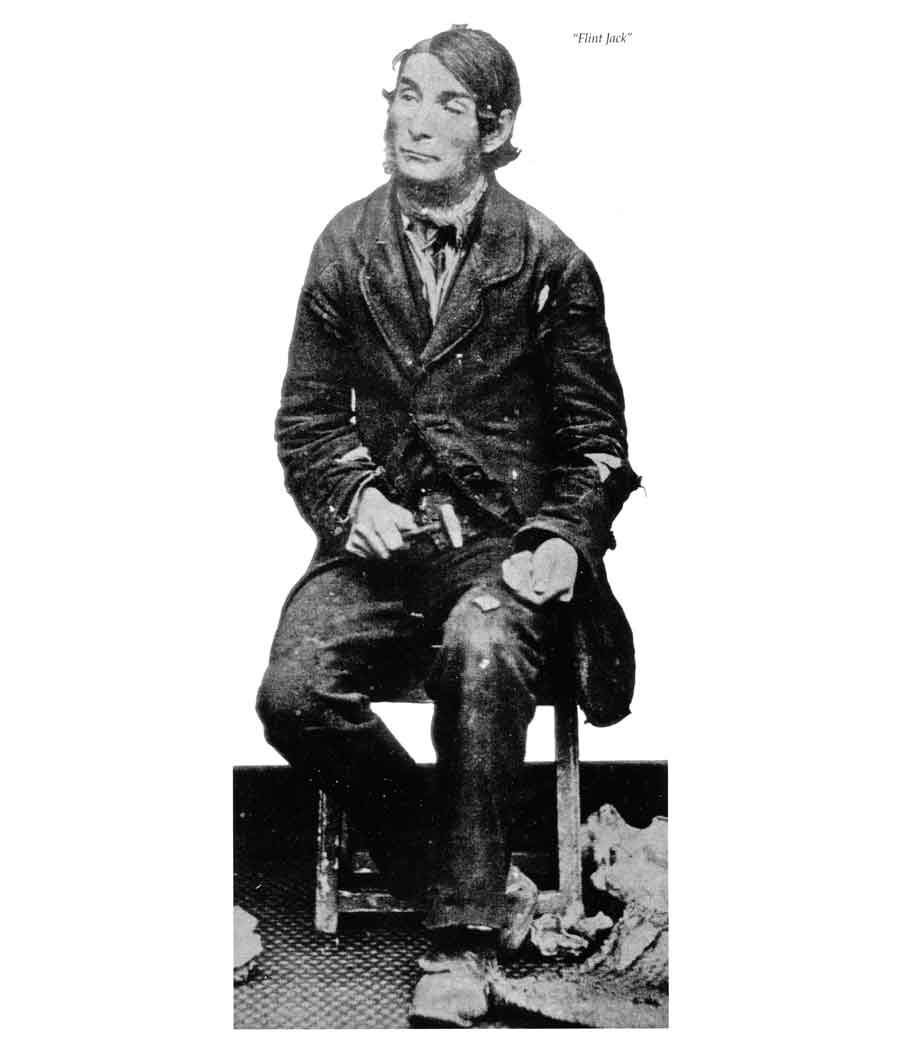 He managed to fool the world of archaeologists and geologists for over twenty years with his extraordinary, but dubious skills forging artefacts to sell to dealers in Victorian Whitby and other towns. His skills were so good that had he decided to travel the honest route in his life, he might have become a geologist or archaeologist.
Edward Simpson was born about 1815 in Sleights near Whitby. His father was a sailor, and his mother a local girl, died when Edward was a baby. Edward was fostered due to his father being at sea for long periods, but despite his unsettled early life, he managed to absorb some education and by fourteen he was robust and bright.
Edward entered the service of a Doctor Young, a Whitby historian who encouraged him, teaching him the basics of archaeology, taking him on expeditions to find flint and fossil remains to sell. At about twenty-five, he was given the name ‘Flint Jack’ and became adept at identifying prehistoric remains, cleaning and classifying them.
In 1843 Jack turned to forging artefacts after a dealer in Whitby showed him a flint arrow-head and asked if Jack could obtain more. Jack had a decent living, but thought it a good idea to try to forge artefacts from an area rich with flint and he made an ‘ancient’ arrow-head. He offered it for sale and it was bought immediately. He soon expanded his business making ‘ancient’ pottery.
Setting up a kiln at Bridlington, he obtained some red clay, copying Roman and prehistoric pots he saw in Doctor Young’s collection. Waiting for the pots to dry in the kiln, he began making axe-heads, another money making idea. Naturally, he was asked where he found the objects and he had a good answer, saying they were found among the ‘tumuli’ or burial grounds near to Kirkbymoorside.
Soon he decided to move from Whitby knowing the market was ‘played out’ and moved his goods by wheelbarrow to other towns becoming more daring. Finding an old tin tray he fashioned a ‘Roman’ breastplate carefully beating it into shape. Doubtful if he could fool anybody, he managed to sell it to a Malton dealer, and even managed to sell a forged Roman milestone to a collector in Scarborough!
Jack made plenty of money and liked a drink, and in 1846 after a ‘few’ he boasted about his archaeological knowledge. Soon after, he dug a stone out of the ground and carved the Christian fish symbol on it along with the words ‘IMP CONSTANT EBVR’ ( Emperor Constantine, York.) The buyer however sent it to the British Museum, but even they couldn’t authenticate it. Maybe the buyer was suspicious? Jack didn’t wait around, he bolted and moved south to Peterborough, lying low for a time and became assistant to a fossil collector.
Later, Jack returned to his old ways, stole some fossilised wood and carved it into the shape of a signet ring, inscribing the name ‘INGULVUS’ which translates into ‘INGULFUS,’ the abbot of Croyland Abbey in 1272. Jack invented a story about how he had obtained the ring from a labourer who had been taking soil away from the abbey and then sold it in Peterborough for a tidy sum.
By 1848 he had moved to Colchester, home of many antique dealers and took on a partner as salesman who had contacts in London. Jack made flints but didn’t try fooling the London dealers with anything more ambitious. The two were soon in the money. Jack however decided to go solo to London to try his hand at selling, staying there for a year turning out forgeries galore hoodwinking experts at the British Museum.
Beginning to lose nerve a little, realising that one day he would be ‘rumbled,’he came back to Yorkshire, stopping off at Northampton to offload his remaining ‘artefacts,’ then walked to York meeting an old associate who got him the job of fossil collector at York Museum. He spent time gathering material from the moors and also travelled to Newcastle where the magnesium limestone yielded excellent fossilised fish. His old ways however were beckoning him, and he visited North Shields where there was an abundance of ‘workable’ flint.
Jack left the museum and went north to the Lake District. There he made an honest living making amber necklaces, carving wood and also occasionally slipping in an ‘old’ arrow head. From there he went to Ireland and did some honest work as well as fooling archaeologists with fake Celtic artefacts.
Returning to London in 1852, he met up with geologist professor Tennant. This meeting would bring Jack into trouble, his drinking affecting his work and people began to doubt his honesty. It would be ten years before the truth came out.
Travelling around England including the Midlands and West Country and Scotland, his drinking became heavier. In 1861 he returned to London and professor Tennant’s shop and was asked about his activities, admitting his guilt. He was only caught out once in Yorkshire, always putting on an innocent act and said he never intended to deceive, but was just a poor peasant. Tennant didn’t report Jack, but wondered how valuable he might be to archaeologists and geologists.
One January night in 1862 Jack was invited to the ‘Geologists Association’ in Cavendish Square, London to demonstrate his skills. After this he was greeted with applause and later gave more demonstrations in the city and for a while, he made an honest living, but soon he needed more money to feed his drink habit, and burgled a house in Bedford, he was caught and spent a year in prison.
He was visited in prison by writer Llewellyn Jewitt who took down his memoirs and wrote an article afterwards appealing for money to help Jack, but Jack died sometime in the early part of the 1870s with the ‘soubriquet’ given him by Jewitt as the ‘Prince of Fabricators.’