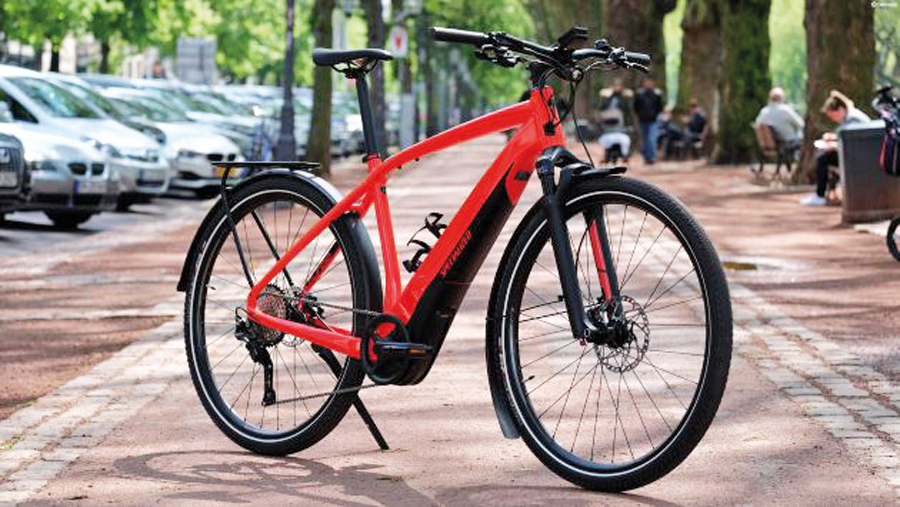 Electric bikes are flavour of the month and we are selling plenty of them in the range of £1000 – £2500. We have just taken delivery of three new Specialized Vados which extend our range to include Electric bikes priced between £2,800 and £3,200. Many people gasp at the price and we hear plenty of comments such as: “I could buy a car for that” and “At that price I would want an engine”. Clearly bikes at this price range are not for everyone.

Already famous for the off road electric Turbo range, Specialized have launched the Vados aimed at commuters and leisure cyclists. Being a Yorkshire man, I like value for money and having recently sold my car I decided to test one of these new bikes on my 10 mile commute to see if they justify the price tag.

The bike’s modern, stylish looks quickly attracted comments from pedestrians and other commuters as I cruised passed them with ease. Unlike most electric bike manufacturers, which have bolted motors onto a frame, Specialized have integrated the motor and battery into the frame of the bike. Without an obvious source of assistance I almost appeared superhuman and took on the image of a cycling god.

Specialized are issuing a guide riding distance of 47miles, later in the year they will be upgrading the software using their grandly named Mission Control app. This will allow the user to customise the power assistance and dramatically increase the battery life. Mission Control will also allow the rider to predetermine a journey range and the bike will then allocate battery power to make sure that you will reach your destination without running flat. It should also mean that you don’t start a journey that the bike isn’t capable of finishing. This should go a long way to removing the “range anxiety” that many e-bike users suffer from.

The first thing that I noticed was how stable the bike felt when I was riding it. The motor is also very impressive, at only 3.5kg the 250w motor is both lighter and smaller than most electric bike motors. It is also noticeably smoother and quieter than other electric bikes that I have ridden and delivers power with almost no lag.

Switching between power modes is easy using a switch on the left hand side of the handlebar and it was relatively easy to reach the legally assisted speed of 25km/h using the motor as needed. There was no need to stand out of the saddle on the hills and on downhill sections the power cut out as I passed the legal limit for a power assisted bicycle. In turbo mode the motor delivers in excess of three times the power that is input by the rider.

On a practical level, the bike has 2in wide tyres which provided plenty of grip on the country lanes. It is also equipped with well-designed mudguards and the rear carrier, which incorporates a light, allowed me to carry a pannier briefcase. For most of the ride home I turned the suspension off, but the easily operated release switch allowed me to take a shortcut along a bridal path.

In conclusion, the bike was impressive and is unlike any other electric bike that I have ridden in terms of both performance and technology. I can certainly endorse Specialized’s claim that the Vado “is you, only faster”.