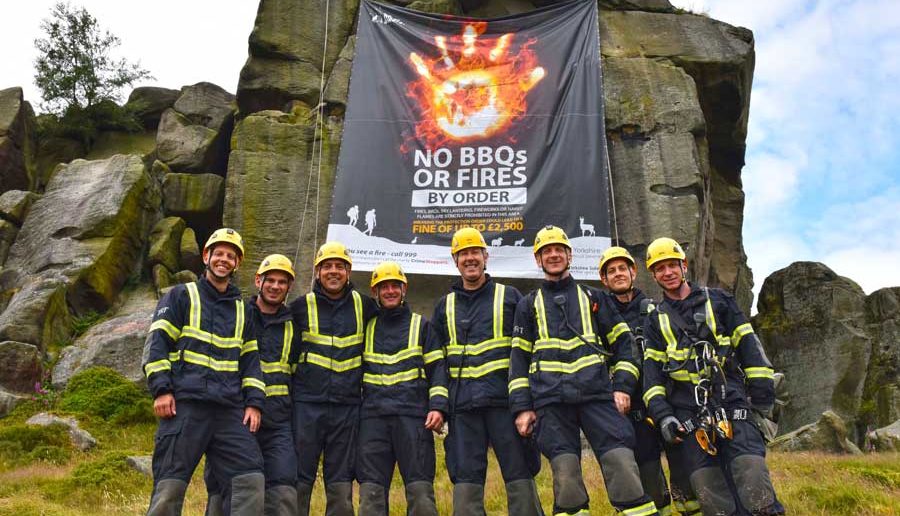 West Yorkshire Fire and Rescue Service (WYFRS) has launched a hard-hitting campaign to prevent moorland fires this summer – after a series of blazes in the first half of 2019.

There have been 11 large moorland fires in recent months across West Yorkshire, causing devastation to wildlife and posing a potential threat to life and property.

The moorland fires have also required a huge fire service resource to tackle.

WYFRS is joining with partners to urge the public to be vigilant and follow some basic rules to enjoy the beautiful moorlands without creating a fire threat to their future.

Firefighters and local dignitaries were among those who attended the launch of the campaign on Ilkley Moor – which saw a huge 7m x 9m banner unveiled down the ‘cow’ rock at the famous ‘cow and calf’ site on the moorland.

WYFRS Area Manager, Chris Kirby, said: “This year has seen some huge moorland fires across West Yorkshire and it’s crucial the public get behind this campaign to ensure this trend doesn’t continue.

“Some of the fires have been deliberate, which we utterly condemn – but most have been accidental and simply due to people being careless when out and about. As our campaign highlights – just one family barbecue can start a fire which destroys hundreds of hectares of beautiful moorland.”

Chris added: “We don’t want to ruin anyone’s fun but we do want to make people aware of the serious consequences that a barbecue or a dropped cigarette can have, especially in tinder dry conditions.

“A fire can spread so quickly, once it’s caught there’s little you can do to stop it and before you know it there’s a catastrophic blaze with far reaching consequences. This not only impacts on local moorland and wildlife, but affects local businesses, especially if roads need to be closed for health and safety reasons.

“Please help us spread this simple message – Be Moor Aware!”

This year WYFRS attended a moorland fire (in Marsden) as early as February (26th) which is unprecedented for the time of year.

At its height, more than 35 firefighters were in attendance and part of the A62 was closed as a precaution.

This level of resource required can mean we have to call in support from other fire a rescue services.

There are arrangements in place for us to support other services in their time of need and we also receive support when we are dealing with emergencies that stretch our resources. But we would prefer not to be in a position to have to request help from other parts of the country. The best way to do this is to raise the profile of this campaign and prevent moorland fires starting in the first place.

Partners in the campaign are the National Trust, Yorkshire Water, United Utilities, and Bradford, Calderdale and Kirklees councils as well as Crimestoppers.

Know who is responsible? Call the charity CrimeStoppers anonymously on 0800 555 111

Breaking a Public Space Protection Order can lead to a fine of up to £2,500.