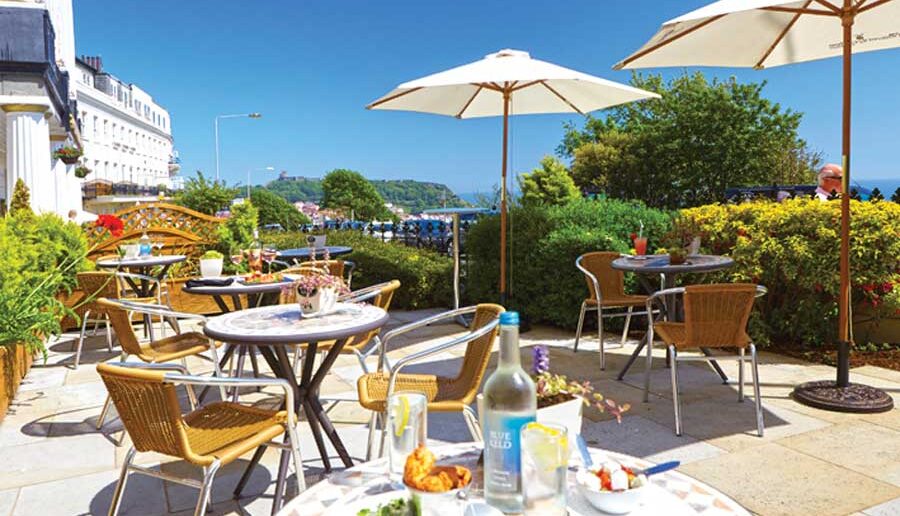 When the sun’s kissing the waves there is nothing better than alfresco seaside seafood, especially on the Yorkshire Coast!

Although the Yorkshire Coast can boast Britain’s best fish & chip shops, its other incredible seafood credentials are often overlooked: the Yorkshire Coast is not just the UK’s Lobster Capital, it is the shellfish capital of Europe with the world’s best-quality crab, lobster and shellfish, including world-famous Whitby Scampi.  It also has the country’s largest fishing industry and is one of the top places in the country to catch record-breaking sea trout and salmon (Whitby has the third largest commercial salmon fishery in England).

The exceptional quality and flavour of Yorkshire’s seafood – which is soon to include the UK’s first edible seaweed farm – attracts some of the North’s top chefs, so even in the tiniest and unlikeliest of places you’ll discover a plate of food that’s really special (or your ‘surf & turf’ beach BBQ could be made with ingredients that would usually grace Michelin-starred tables).

And while lobster and crab might be luxury dishes, on the Yorkshire Coast you can find seafood at non-luxury prices, all to help to support the local fishing industry and encourage people to try something different from their cod & chips – to fall in love with great British seafood of all varieties.  So, for anyone missing their continental cuisine, it’s time to head to the Yorkshire Coast and enjoy an unforgettable seaside seafood holiday.

Everyone’s got their favourite alfresco seafood spot, but here’s a few ideas to whet the appetite:

●
The ‘little café with the big view’, the Sandside Café in Sandsend is right on the edge of the water, with stunning views across the bay to Whitby Abbey.  Its crab sandwiches are adored!

●
The Lookout on the Pier in Scarborough is a hidden gem right on the edge of the harbour (the balcony edges over the sea), with signature dishes that celebrate locally-caught lobster, or the rich abundance of local seafood in its ‘fruits de mer’ platters, seafood stews and chowders.

●
From his Whitby harbourside ‘shack’ of a restaurant, the Star Inn, Michelin-starred chef Andrew Pern’s seafood menus include Day Boat specials and local Shellfish Platters starring Whitby Crab, plus a Rockpool of local fish with seashore vegetables.  You can also get their signature local fishcakes, the catch of the day, or Whitby scampi to take away!

●
The highly-rated Cod & Lobster in Staithes couldn’t be any closer to the sea, with alfresco seating right by the harbour edge with fish swimming by, and cobles creaking on the water.  Their signature dish is the Cod & Lobster, starring locally-caught cod and lobster, but there’s plenty more on the catch of the day menus to tempt you to return again, and again.

●
The award-winning Fisherman’s Wife in Whitby has the best sea views in the bay, using fish, crab and lobster straight off the daily boat.  Although locally-caught lobster is the star, their famous signature dish is the Fisherman’s Wife’s Yorkshire Fishcake.

●
The Coe Roe Fishmongers in Whitby doesn’t just sell fish: it catches fresh crab and lobster on its family-run boat, the Nazanna, and then turns it into scrumptious seafood platters or sandwiches spilling out at the seams, perfect for a beach picnic.

●
For an alfresco beach BBQ or picnic, the coast’s top fishmongers will dress your freshly-caught crab and lobster, like HG Lovitt of Filey, or even rustle up an outstanding seafood platter to order, like Mainprizes of Scarborough, or even have ready-to-eat seafood selections and seafood salads, just like the Whitby Catch, run by the famous the Magpie Café fish restaurant.

●
In many of the coast’s restaurants, you’ll see Whitby’s famous Fortune’s Kippers on the menu, and a trip to the 140-year-old smokehouse nestling under Whitby’s cliffs is one of the highlights of any seafood experience.  Not only is it a historic, multi-sensory experience, but Fortunes is one of Les Routiers top food shops, TV chefs love it (from Rick Stein to James Martin), and even the royal family are fans!  Definitely worth stocking up, and using in a recipe back home…

●
For something a little wilder, why make your own seafood dish – a lobster lunch or seaweed snack – by foraging along the seashore with the help of experts Taste the Wild, Hidden Horizons, or Real Staithes.

●
Fish fingers get a bit fancy on the Yorkshire Coast: at the highest point in Scarborough, you can admire the best sea-views in town from Oliver’s On the Mount café, savouring posh fish finger or squid sandwiches from its street-food kiosk (or you can sit indoors in style and elegance to indulge in their larger mouth-watering menu); meanwhile at the tiny, toe-tapping tea-room, the Tea, Toast & Post in Robin Hood’s Bay you can snack on their signature Fish Finger Toast Platter just metres from the sea on the harbour slipway, and also be in one of the coast’s top live acoustic music venues!

●
If you can’t do without fish & chips, then you’ll find them with a magnificent view at the cliff-top ‘shack’ of the Fish Box in Robin Hood’s Bay.  Run by the award-winning local Fusco family – who have several top-rated fish restaurants along the coast – the seafood is of the highest, marine-friendly quality from local producers, and the packaging is 100% compostable.

●
For rainy days when you need to eat indoors, Yorkshire Coast has some of Britain’s best, award-winning fish restaurants including the Golden Grid, Lanterna and Clarks in Scarborough; the Magpie Café, Star Inn the Harbour, and the Quayside in Whitby; or the Estbek in Sandsend.

“It’s such a quintessential part of a holiday to Greece or France, enjoying sensational ‘fruits de mer’ by the sea but the Yorkshire Coast can rival any seafood in the world for its quality, and with its magnificent coastal scenery and passionate chefs and producers, it is one of the best places to celebrate seafood in the great outdoors.  You really don’t need to travel abroad to stumble across relaxed ‘secret’ spots in a magnificent setting – on a beach, harbourside or clifftop; indulge in beautifully-simple seafood so fresh you can still taste the sea, with a flirtatious sea-breeze that magically enhances the flavours, better than any fancy seasoning.  You can find it every day here on the Yorkshire Coast – you don’t need to travel a single air mile,” says Janet Deacon, Tourism and Culture Manager at Discover Yorkshire Coast.

You’ll find much more inspiration at;