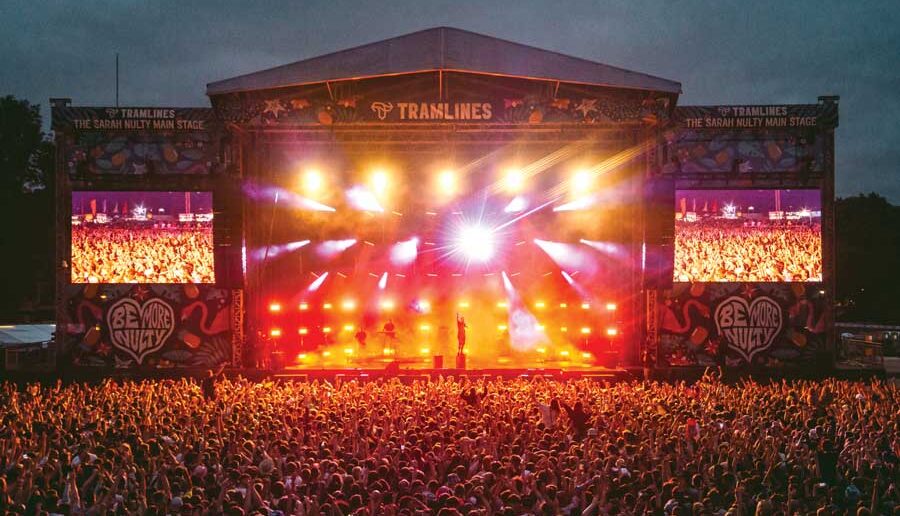 Festivals are back too, and our South Yorkshire cousins stole a march on the three happening in our region in the next two months. Tramlines, Sheffield’s biggest festival of music, art, and comedy, ended marking a landmark moment for the city and the UK live events industry. 40,000 revelers a day attended the sold-out event at Hillsborough Park from 23rd to 25th July as Tramlines became the largest festival to return in Western Europe and among the first to join the Government’s Events Research Programme.

Highlight performances over the weekend came from The Streets frontman Mike Skinner who popped a bottle of champagne on Sarah Nulty’s Main Stage in celebration of crowds coming together after periods of extended lockdown. When disco diva Sophie Ellis-Bextor brought her popular Disco Kitchen livestream series to real life audiences with a jukebox of tunes including a euphoric cover of Madonna’s ‘Like A Prayer’.

Almost stealing the show was Dizzee Rascal who had crowds in the palm of his hand. The gratitude oozing from Dizzee on Sunday evening was touching. As he donned a Tramlines scarf, he said, “It’s been two years since I’ve touched a stage – I’m gona do this again”.

For festival organisers, it was an emotional but rewarding weekend. Tramlines Operations Director, Timm Cleasby told us “After 18 months of strangeness, it was unbelievable to be back in the park again. There have been so many hurdles we’ve had to jump to get here and honestly, it’s been quite a rollercoaster. It’s been great to see so many happy smiling faces from crew getting back to the thing they love to revelers having the time of their lives watching the bands they love. Hearing the first band ring out over the festival was an emotional moment.

Tramlines gave dozens of bands and artists the opportunity to play music that was recorded in lockdown to live audiences for the first time. Little Simz made the live debut of her single ‘Little Q’; and ‘End Of The Earth’ from the second album of Sheffield indie-rockers, The Sherlocks, also went down a storm. But perhaps the highlight in terms of new talent was Lauran Hibberd (who you may have caught on TV if you have been enthralled by The Hundred cricket).

Fast becoming a key figure within the emerging indie elite, slacker-pop sensation Lauran Hibberd shares her satire-fuelled, anthem-stacked ‘Goober’ EP, arrived this August.  “‘Goober’ has been a long time in the making”, explains the enigmatic figure. “It’s survived a global pandemic and many mood swings from me. These tracks all summarise what I’ve been thinking over the last twelve months. I hope for your sake, you can’t relate ha-ha!” You’ll be pleased to know that you can catch her twice in Leeds before the end of the year. She is supporting The Vamps at the O2 Academy on 15th September. She headlines her own tour at The Key Club on 7th October

In 2013, a 16-year-old LORDE quietly, yet confidently asserted herself as the voice of a generation with her full-length debut, Pure Heroine. The album would go triple-platinum, win two GRAMMY® Awards, and spawn the certified Diamond, record-breaking, international juggernaut single, “Royals,” and quadruple-platinum follow up “Team.” The former cemented LORDE as “the youngest solo artist and the only New Zealander to achieve #1 on the Billboard Hot 100 since 1987.” Time exalted her amongst the “Most Influential Teenagers in the LORDE is back with a new long-awaited record titled Solar Power. Of the album Lorde told us, “The album is a celebration of the natural world, an attempt at immortalizing the deep, transcendent feelings I have when I’m outdoors. In times of heartache, grief, deep love, or confusion, I look to the natural world for answers. I’ve learned to breathe out, and tune in. This is what came through.” It is a distinct reinvention, one that gleefully puts a gap between Lorde and everyone else in terms of her creativity the comeback single, Solar Power is a lesson in letting pop stars take their time as is the whole of this beautifully constructed album. She is also touring the new album and starts a worldwide tour in 2022 eventually arriving at the O2 Academy in Leeds on May 25th, 2022.

Following the release of their acclaimed new single ‘Hi’ earlier this year, everyone’s favourite Scottish rock band, Texas, have announced that their UK tour has been rescheduled to 2022. Kicking off with two dates at the Olympia in Dublin, the extensive tour includes a must-see date at Harrogate, Convention Centre on February 25th, 2022. Just before Christmas last year, Texas caught everyone by surprise when they released ‘Hi’ featuring the Wu- Tang Clan. The press was unanimous with praise for the track. ‘Hi’ opens with some Morricone guitars, before Sharleen Spiteri’s soulful vocals lead the way. It was a slow burn triumph. Fortunately, there is also more to come an entire album’s worth of pure Texas gold, is unveiled later this year easily rivalling the best music of their stellar career.

Few bands have a live reputation like The Waterboys. From their “big music” period in the 80s through to the mix of genres on their classic Fisherman’s Blues tours, the band have consistently blended tightness, inspiration, and improvisation to reach heights of performance few other acts can.

The last decade has seen the group release a stream of supremely in-form albums, from 2011’s An Appointment With Mr Yeats to their latest release this summer, Good Luck, Seeker.

The Waterboys music shows no sign of fading, and the best place to experience it is played by the originators live York is lucky enough to chosen as one of few places to see the band live when they hit The Barbican on October 9th

CREEPER have followed their Top 5 album ‘Sex, Death and The Infinite Void’ by releasing their new EP ‘American Noir’.  Extending the ‘Sex, Death…’ narrative with a poignant new chapter, ‘American Noir’ represents a requiem to the album’s central character Roe and explores his partner Annabelle’s grief and desolation following his death. The EP was preceded by the singles ‘Midnight’ and ‘America At Night’, both of which demonstrate CREEPER’s ever-expanding ambition, versatility, and dramatic intensity. This summer saw CREEPER resurrected with an emotionally charged second stage headline set at Download Pilot. Their first live show in 16 months proved to be one that no-one present will ever forget, but there are plenty more chances to see them in action in the coming months. They are playing Leeds Festival and later in the year on 21st December at Leeds, Beckett University Students Union.