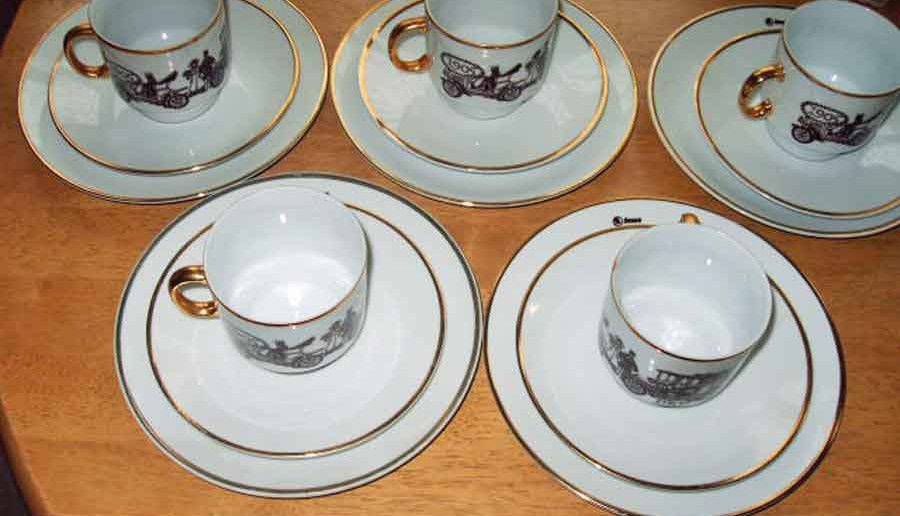 Hello Gary,
Could you please tell me if the enclosed 5 piece Skoda tea-set, is of any value. It was presented to me at Brands Hatch racing circuit, in the early 1980s. It has never been used.
It shows on the cups models of 1905-1909 Skoda cars. It is gold gilded around the edges.
As I am now in my mid 80s it will never get used now, and I would like to dispose of it, if there is any value attached to it.
Thank you.
Mr William Shears
Dear Mr. Shears,
Thank you for your email.
Your tea service was made in Czechoslavakia and would have been used to advertise Skoda. How many of these have been made and given away determines its collectability. Unfortunately it is still quite modern and would not fetch very much in today’s market. Put the tea set away and eventually it will become collectable and more valuable.

Dear Gary,
I have an ornament that belonged to my grandmother. It looks very old but I don’t know what it is or if it is worth anything. Could you help? Thanks, Sue.

Dear Sue,
Your ornament is called a Fairing. They were very popular in Victorian times and are called Fairings because they were prizes that were won in fairgrounds. They were made of porcelain and were of   humorous, political or domestic subjects. The early ones had a shield and dagger mark underneath and later models often said ‘Made in Germany’.

Yours is a humorous example which says ‘Returning at 1 in the morning’ and is probably a later model. Unfortunately it is not very valuable because of the large quantities made, but there are lots of collectors out there.
Yours would sell between £20-30.
Hi Gary
I hope you can help with any information regarding my grandparents’ blue vase.
There were a pair of these but unfortunately my sister broke the other one.  I can remember seeing the vases in my grandparents’ flat over 50 years ago, but I don’t know how old they actually are, or if they have any value.
The vase measures 21cm tall, 10.5cm diameter across the widest part, and 7cm diameter across the top.  The colours are still very vivid and I really love it.
Many thanks, Denise Exley Dear Denise,
Royal Stanley Ware was produced between 1919-1928 by Colclough & Co. in Longton, Stoke-on-Trent, Staffordshire. It was a cheaper alternative to the more expensive Moorcroft and is known as Jacobean Ware. Lots of different shapes, colours and flowered items were produced. They were very popular at the time because of the lovely Cobalt blue, stunning colours and affordable price. In the 1970’s – 80’s, they were sought after by the Europeans and Americans but today like a lot of things the market is limited. The good news is you should be able to find the matching vase your sister broke for under £50.
Dear Gary,
I have an antique wall clock and I would like to know more about it. Thank you for your help.
Thanks Stuart
Dear Stuart,
This is a nice example of a Vienna wall clock. It is a Victorian one with a mahogany case, brass enamelled dial and Roman numerals. The top is known as a domed head and the finials make this very attractive. These are much undervalued at the moment and you could buy a similar clock at auction between £200-300. I really like this clock, it has obviously been well-loved and polished over the years as it still retains its beautiful mahogany colour.