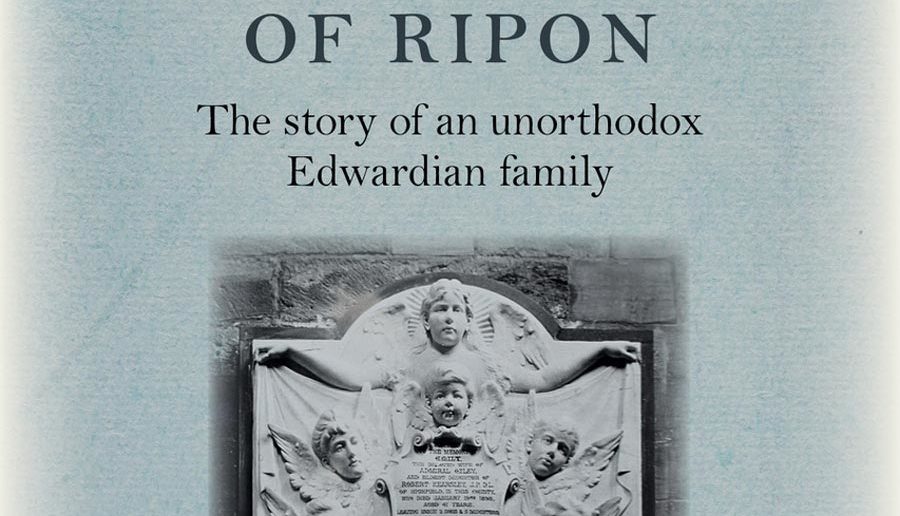 Meticulously researched by Terry Eliot, ‘Admiral Oxley and the Cherubs of Ripon’ may read like a period drama, but it is far from fiction. Based on the author’s own family history, and various letters and diaries, it chronicles life in late Victorian and Edwardian England through the eyes of an affluent, middle-class family. Eliot, with her easy-to-read style, paints a fascinating picture of life, love and mischief as the children grow up and break away from the strict regime of their eccentric Admiral father.

Terry Eliot was born in 1941, the only child of a Naval officer and would-be Canadian mother, who was accidentally born in England! After the war the family moved around, at one time living in Bermuda and Malta, and on various naval air stations in Scotland. On leaving school, following a spell as a secretary which she hated, she entered the theatre, working mainly in Rep (often in comedy farces) but with small parts in TV and films. She switched to the production side of the business in the 1980s, combining this with writing. She is a keen gardener and now lives for part of the year in France with her travelling cat, Ollie.

Terry Eliot said; “I started this book many years ago when I was in my late twenties. There were so many fascinating stories about my eccentric great-grandfather, Admiral Oxley, that I felt somebody had to write them down. Fortunately, two of his children, my aunts Rose and Dot, were still alive and I was able to record their memories on a mini tape recorder.  Needless to say, life and a career got in the way and it wasn’t until much later that I finally had time to piece the project together. Because I wanted to set the book in the context of its time I hadn’t realised how much research would be involved, not only relating to world events, but also to minor puzzles such as what type of bicycle did the Admiral ride, or when did gas light become available in people’s homes?”

“Two things particularly struck me about the period: one was the number of spinster aunts who were landed with bringing up a deceased sister’s children (death was never far away in Victorian and Edwardian times): the second was that “children will be children” whatever age they live in. The Oxley children, who were nicknamed the Terrors of Ripon for their mischievous ways, were only acting with the exuberance of youth,” the author adds. ‘Admiral Oxley and the Cherubs of Ripon’ is available now;

The book retails at £8.99 and is available to order through independent bookshops and Waterstones (via Gardners) and FeedaRead.

The Yorkshire Reporter has a copy of the book to giveaway,
to enter go to the competition page