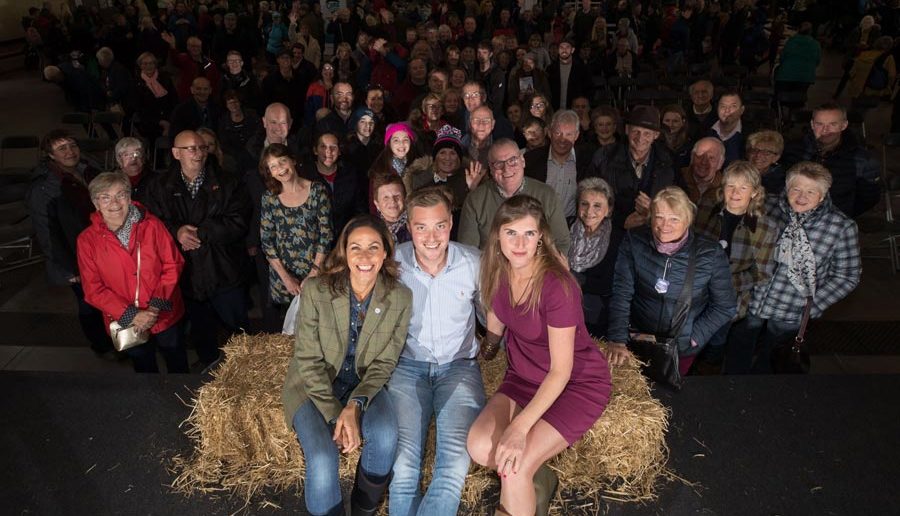 Julia Bradbury with Will Smith and Amanda Owen
Local News

Julia Bradbury headlined the event for the first time this year, with surprise guest Yorkshire Shepherdess Amanda Owen making an appearance on the Main Stage.

Crowds swarmed for Julian Norton on the Sunday and Peter Wright on the Saturday – both stars of The Yorkshire Vet.

Charles Mills, Show Director said: “We’ve had two days of celebrating the very best of farming with some tough competition in the judging rings and plenty of entertainment for families. There’s also been lots of hands on activities for children to learn about the countryside in a fun and interactive way.”

The Supreme Championship in the new Pedigree Calf classes was won by Mark Hallam and David Wright of Ashbourne in Derbyshire with a British Blue heifer, Dewlands Olivia, while Reserve went to Martin Clough of Lincolnshire’s Red Lincoln heifer, Beverley Heroine.

The Supreme Champion in the Poultry section, which attracted more than 1,000 entries, was won by a Black Leghorn bantam, bred by Ellis Heeley of Drighlington. Ellis, who works at RHS Harlow Carr in Harrogate, decided she would like to get involved in showing just a year ago and the win was her first Supreme Championship. In the sheep rings, competition was as fierce as ever for the Supreme Champion Pair of Butchers’ Lambs. The title went to two Beltex cross gimmers owned by Ian, Mary and Richard Lancaster of Clitheroe. Reserve were Martin and Val Brown of Leyburn with a pair of Suffolk x Beltex gimmers.

Two young Cumbrians battled for the Sheep Young Handler title, with the Championship going to 11-year-old Oliver Watson with a Jacob, while seven-year-old Leah Parker took Reserve with a Texel x Beltex.

In the Honey section, the Yorkshire Post Cup for the most points in the show went to first-time entrant Josephine Anderson of Hebden Bridge. It was her first-time showing honey produced from two hives at home and she also took another two trophies as well as sharing a third. The prize for the Best Exhibit in all classes went to Kathleen Brown of Pontefract for her decorative beeswax flowers.

Now in its 17th year, Countryside Live usually attracts around 12,000 visitors across two days. As well as family activities, there are 2,000 animals who converge on the showground over the two days to compete.