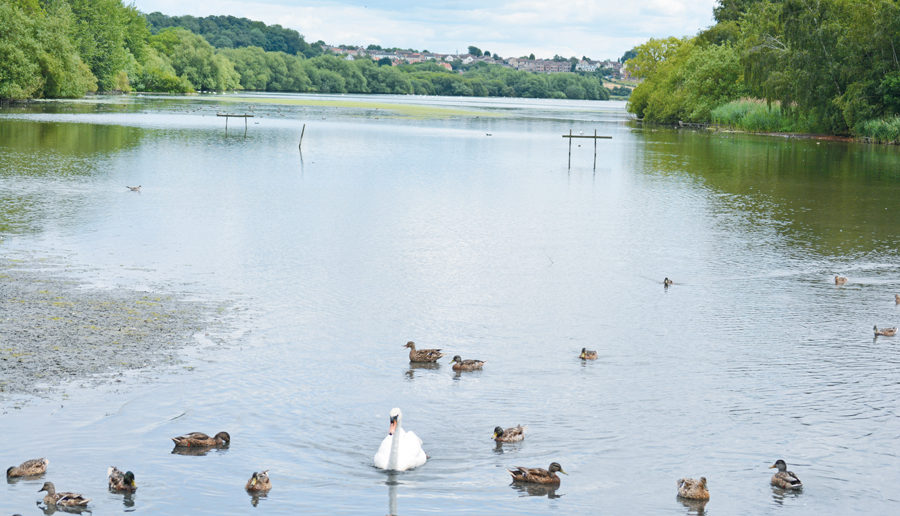 FAIRBURN INGS FROM THE COAL FACE TO A WILD PLACE

Fairburn Ings near Castleford is a much-loved nature reserve run by the RSPB and celebrates its 60th anniversary this year. Highly popular with both avid bird watchers and families alike, it is difficult to imagine that the tranquil beauty of the reserve was not always so. This month we have a look at Fairburn Ings and discover that it has gone full circle from natural to industrial and back again!

THE AREA OF FAIRBURN IN THE EARLY DAYS

In the Dark Ages, the area of Fairburn and Castleford was made up of marshland prone to flooding from the River Aire. The ford, which had been used for centuries was not always a reliable crossing when the river was high. We know it caused problems for King Penda’s army in 655 when they fled south following the Battle of Winwoed (Aire), using the Roman Road to reach the river. The Venerable Bede wrote “More of the Mercians were drowned, as they fled, in the river Winwoed, then overflowing its banks – than had fallen by the swords of the Northumbrians.” As the struggle for the north raged on between the Saxons and the Danes, the Danes were recorded as attacking King Eadred at ‘Chesterford’ as they retreated across the river.

Later, in 1069 William the Conqueror was held up for three weeks at the river on his march to York because the Brotherton marsh and the area of the now reserve was inundated. When the Domesday Book was written, the village was named Fareburne and held by Saxon chief Ligulf, as was neighbouring Ledsham. The land, as with much of the area, was owned by Ilbert de Lacy. The manor at Newton was held by a man named Haelward – a Scandinavian name.

In the 12th century the monks of St John at Pontefract – then known as Kirkby, were granted much of the land at Fairburn and Ledston, including fishing rights along the river. By 1159 the Walleys (Wallis) family owned Newton Abbey – sometimes referred to as Newton Priory, a moated manor house, and did so for at least the next seven generations. (Although now surrounded by a lake, the moat and manor house ruins can still be seen today.) During this time, Fairburn itself was owned by several families including the de Farburns and the de Burkins. It was not always the peaceful place it appears to be to visitors today – in 1212 Symon the village teacher was allegedly murdered by Nigel de Farburn. Apparently, Nigel had sworn to take vengeance upon Symon after he had previously drawn a dagger on him. Sources say “Nigel de Farburn was appealed by Ranulph, son of William Young…. that being in a certain ship with Symon, to cross the water of Eir, he took the said Symon and threw him into the water so that he perished.” Nigel never admitted the crime.

The marshland was drained sometime in the 17th century for farming and the area became more agricultural as a result. Also around this time quarries began to appear to take advantage of the local alabaster and magnesium limestone. The alabaster was apparently of excellent quality – being able to be used for funeral monuments as well as for plaster. The limestone was ferried along a canal which is known as ‘the cut’ on the reserve.

The 18th century saw coal mining take place under the area which is now the reserve. The miners dug a network of tunnels with pillars of coal left in place as supports. The mining began to cause subsidence and by the turn of the 20th century it had begun to show by the increased areas of open water and marshland – the land starting to return to its original form once more. Swans and wildfowl began to frequent the area. The maintenance of the canalised river began to prove difficult and in 1913 the Calder Navigation and Wheldale Coal Company agreed between them to build slag banks along the northern bank of the river right from Wheldale all the way to the railway viaduct. As subsidence continued and the areas of open water expanded, the coal board decided that the land was fit only for tipping and Fairburn Ings became a giant spoil heap, the largest in Europe. The hills where the birds nest are not a natural feature but created by men with dumping trucks full of mining waste day after day. The pools and lakes created by the subsidence were going to be filled in by the coal board’s spoil, but as many waterfowl had become attracted to the area there were calls for it to be made a nature reserve. This was achieved in 1957 thanks to volunteers such as Bob Dickens and Dr Pickup.

Bob Dickens was a school teacher from Buckinghamshire who taught maths and rural studies at Crewe Road Secondary Modern School in Castleford. His enthusiasm for nature had been with him his entire life, growing up as a farmer’s son, and this enthusiasm was contagious to his pupils who loved his relaxed and friendly manner of teaching. Dr Doug Pickup was a paediatrician at Pontefract hospital, who despite having a huge case load and responsibilities in his medical career, still found the time to be a keen naturalist and bird watcher. As fellow enthusiasts, they managed to persuade the West Riding County Council and the National Coal Board to designate the area as a nature reserve. Another volunteer, Charlie Winn was one of the very first rangers. A welder by trade he was also a dedicated nature lover who spent years protecting the reserve from poachers. He visited and enjoyed the site his whole life. The three men, along with other volunteers planted tens of thousands of trees on the spoil heaps such as silver birch, alder, Corsican pine and oak saplings. In 1968 Fairburn Ings became an official bird sanctuary and was looked after by volunteer wardens until it was taken over by the RSPB in 1976. By the late 80’s much of the lakes had been formed by more subsidence and the local mines all closed between 1985-1992.

Fairburn Ings today is a lovely place to visit. There are 650 acres of open water, woodland, marshland, wet meadows, heathland and reedbeds to explore making for some very scenic walks where you can get up close and personal with nature! There is a visitor centre where you can collect a map, hire binoculars and purchase drinks, books, toys and bird care products. The three main trails take you through a variety of habitats which allow you to see lots of different birds including willow tits, tree sparrows, lapwings, snipe and redshanks. The RSPB are continually working to improve the site for both visitors and nature, but they do not forget their roots – the hides on the reserve are named after the men who started it all – Bob, Doug and Charlie!

As well as the birds, you would expect to see somewhere like Fairburn such as swans and geese in the winter, there are also some very rare species who have decided to make a home there. Bitterns, tree sparrows and spoonbills are all in critical decline in the UK, but the RSPB are proud that these endangered birds are all successfully breeding at Fairburn Ings. In fact, this is the first time ever that spoonbills have hatched chicks in the north of England and on an RSPB reserve. Normally found in southern and eastern Europe, the tall white heron-like birds with an enormous spoon shaped bill which they use to sweep through the water for food are an unforgettable sight. They have not regularly nested in the UK since the 1700s so the fact that they have chosen Fairburn Ings to rear their chicks is incredible. Darren Starkey, Senior Site Manager of RSPB Aire Valley says “Although we have occasional spoonbill sightings each year at Fairburn Ings – some travelling from as far as the Netherlands and Spain – none have successfully nested before and never on an RSPB site. When we suspected they might be feeding chicks, the warden and volunteer team took turns keeping watch for feeding flights. These spoonbill chicks – known here as ‘teaspoons’ – have been a long time coming, following a lot of hard habitat management work. They’re currently hidden away deep in the vegetation but we hope they’ll be much more visible when they fledge.”

As well as the fantastic conservation work that the RSPB do, there are also lots of different events to get involved with on the reserve, from children’s activities, to pond dipping, to photography workshops. To mark the 60th anniversary of Fairburn Ings, a project is taking place where they are hoping to collect many memories from visitors over the years. A display in the visitor centre holds blank memory cards for visitors to fill in, be they recollections of working as part of the old mining industry, or feeding the ducks as a child, the memories don’t need to be old or unusual – just special to each visitor – all memories are important. The memories collected throughout the project will create a new totem pole installation on the reserve’s Coal Tips trail.

I myself remember being taken from a very young age to feed the ducks off the jetty where the lay-by was. I then took my daughter to the same spot when she was a baby where I recall her eating more bread than she threw to the ducks! (of course we know not to feed them bread now) Unfortunately, that area was closed in 2004 due to road safety concerns but the RSPB did build a new duck feeding platform in a safer area.

Our editor Lesley Ann also has fond memories of visiting Fairburn Ings as a child and then taking her children and now her grandchildren. Her father Kevant Coates born and raised in Kippax has memories spanning back to the war and he shared them with us:

“My father Albert Coates used to take me to my grandparents at Newton, sitting me on a cushion on the crossbar of his bike. I was only three years old so it was 1940. My grandad was the farm manager in Newton and the farm was just across the road from Fairburn Ings. The cottage my grandparents lived in was called Priory Cottage which overlooked Newton Abbey. Surrounded by a moat, the remains of the abbey are still there today but covered in ivy etc.  In the summer of 1950 I visited Fairburn Ings with two school friends. I had found an old boat a couple of weeks earlier in the reeds and wanted to show them it. Unfortunately, when we pulled it out it had a hole in the bottom which we plugged up with muddy clay and set off into the water – by the way the water was a lot wider in those days! The high spoil heaps were bulldozed into the water because of the Aberfan disaster which made the water smaller. The two lads who were with me in the boat were Derek ‘Dido’ Evans and Brian Hartley from Castleford. I wonder if they are still around today – I hope so, it would be great to see them again. I still visit Fairburn Ings on a regular basis and have had some happy times there. The people who run the reserve have done a great job and deserve a lot of credit for the hard work they have done over the years. I always drive past Priory Cottage and wonder what my grandparents Henry and Ada would make of it now. My childhood memories of Fairburn Ings are wonderful – including Grans apple pie and custard!”

Fairburn Ings is open all year round for you to visit with your family and make your own memories!