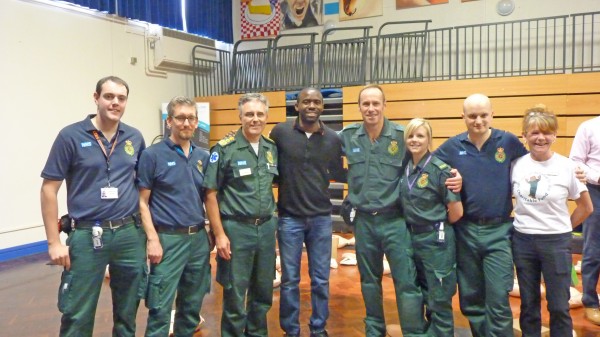 Former Bolton Midfielder Fabrice Muamba, who suffered a cardiac arrest during an FA Cup match in 2012, visited Yorkshire to support a campaign to teach thousands of schoolchildren life-saving skills.

Fabrice went to Fulford School in York to watch as hundreds of pupils were taught cardiopulmonary resuscitation (CPR) – a technique which undoubtedly helped to save his life. He was joined by cardiologist Dr Andrew Deaner who helped on the pitch when he collapsed.

Fulford School was one of 50 schools taking part in the Yorkshire Ambulance Service NHS Trust initiative to teach these vital skills to around 11,800 children across the county as part of European Restart a Heart Day.

Supported by the British Heart Foundation (BHF), which provided the training kits, and the Resuscitation Council (UK), the training session was the biggest event of its kind ever staged in the UK.

Jason Carlyon, Clinical Development Manager for Yorkshire Ambulance Service, said: “The event exceeded all of our expectations; it was a huge success thanks to the support of everyone involved. This includes all the off-duty ambulance staff, community first responders and British Heart Foundation volunteers who delivered the training and the schools who signed up to take part in this valuable lesson. The schoolchildren were enthusiastic and excited to be a part of such a huge and important initiative.

“Over 30,000 people suffer cardiac arrests outside of hospital in the UK every year and 80% of these happen in the home, often in front of loved ones. Less than one in ten people survive, partly because people don’t have the skills or confidence to perform CPR prior to the arrival of an ambulance. We are committed to passing on our life-saving skills to members of the public so that survival rates improve and this event is a prime example of that.”

One person who knows, more than most, about the benefits of bystander CPR is 50-year-old Doug Skelton, who suffered a major heart attack while refereeing a rugby match in Selby, North Yorkshire, in April 2014.

Doug’s life was saved by off-duty special constable and rugby player Neil Williams and team physiotherapist Hayley Brady who immediately started resuscitating him until the arrival of the ambulance service. He is now making a good recovery at home in Brayton, North Yorkshire.

Doug said: “I can’t remember anything from the actual event but what I do know is the real heroes of that day were Neil, Hayley and the ambulance staff who undoubtedly saved my life.

“Anything that can raise awareness of the benefits of bystander CPR, including this admirable effort by Yorkshire Ambulance Service to teach life-saving skills to thousands of schoolchildren in one day, can only be a good thing and I am living proof of that.”

The event marked the launch of the BHF’s new quicker and simpler CPR training programme that could lead to thousands more children learning CPR in Yorkshire and across the country.

The new BHF kits were used to train children on the day and will leave a legacy at schools across Yorkshire so they can continue to train pupils in the future. The charity’s ambition is to create a ‘Nation of Lifesavers’ in which all children leave school with the skills to save a life in an emergency.

Before the event, many of the schools prepared for the training event by playing LIFESAVER (www.life-saver.org.uk) from the Resuscitation Council (UK), a live-action movie which is played like a game and enables the user to save a life.