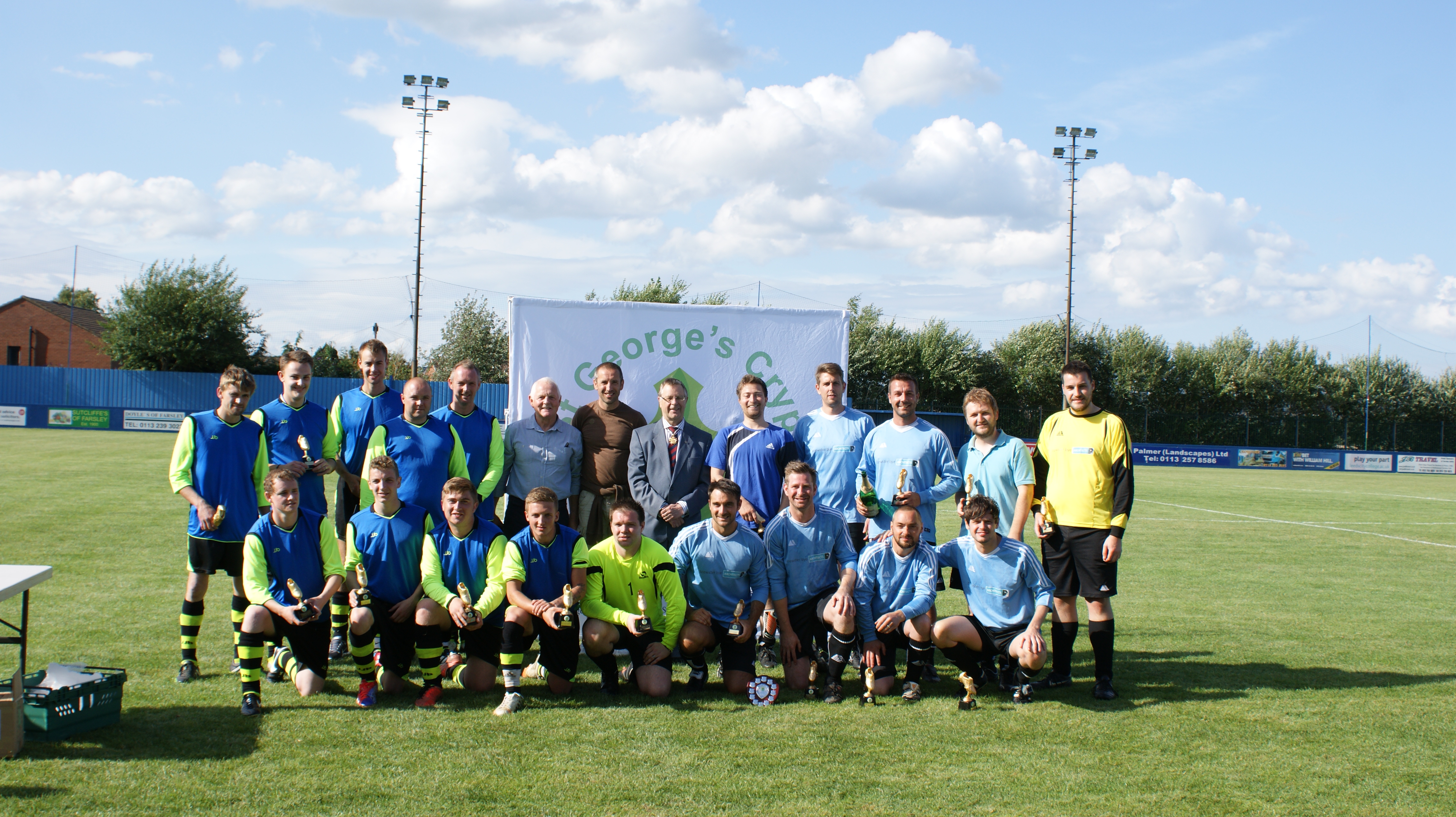 St George’s Crypt, a Leeds based homeless charity, is always coming up with innovative ways to raise both its profile in and around Yorkshire and much needed money to keep providing all the vital services it runs. For the past two years they have run an ever more successful football tournament and family fun day in Farsley attended by numerous stars of Emmerdale and other Leeds based celebrities.

Sunday 3rd August. 8am. Farsley AFC. Men dressed in black, a blonde in a ringmaster uniform, a lady in lederhosen and a man in a purple suit; these are just some of the characters who have arrived to set up the Emmerdale Crypt 7s Football Tournament and Family Fun day.

[private]A hive of activity ensues – deliveries of food, the CEO of St George’s Crypt warming up the grill with one of the directors of Complete Office Solutions, cupcakes and jewellery alongside the police and fire services. As the stalls set up the football teams start arriving; the motley crew of Crypt Angels, the red and white of Emmerdale, the pale blue and black of Brewster Bye to name a few.

The day itself kicked off at noon: sun shining, grill smoking and all the sounds of the fair. Cast members of Emmerdale were mobbed by the public for photos, a chat, a handshake and a smile – they kindly obliged. The deputy Lord Lieutenant of West Yorkshire Mike Fox ambled amongst the many stalls and children were put in shackles and locked in the police van – all in the name of good fun!

The Crypt Chaplain Reverend Roger Quick, a musical maestro, gave the whole affair a Romanic feel with hearty tones pumped out of his harmonica whilst offering his prayers and best wishes for the teams entering the field of play.

And so to the pitch – the teams fought valiantly. The Crypt Angels fell at the first hurdle with the Emmerdale team getting through to quarters beaten by Leeds Building Society. Armley CCFC and Brewster Bye Architects made it through some stiff competition to the final and played through to penalties. Nail-biting as ever, evoking memories of Euro ’96, Mark Skeels of Brewster Bye had this to say. ‘For a bunch of Architects we certainly exceeded our expectations this year by overcoming some strong teams on route to the final. Having to experience two nerve racking penalty shootouts, it was down to the heroics of our Goalkeeper Jonny Martin who ensured we were crowned champions. We will no doubt be back to defend our title next year!’

Commentary for the final match was provided in tandem by Emmerdale stars Chris Chittell and James Hooton, much to the amusement of all the spectators…and one or two of the players.

The deputy Lord Lieutenant and Chris then gave the winning team their trophy and the after-final party kicked off with great performances from Release and Gonzo, two local bands, and the Emmerdale band. Partying until 7 and then it was back to the men in black, the ringmaster and everyone else to clean up and pack away for next year.

‘Delighted the event went so well, thanks to a great bunch of volunteers who helped out on the day and all the individual and corporate support we got – at the end of the day we raised over £8,000 from all the stalls so big thanks there.’[/private]