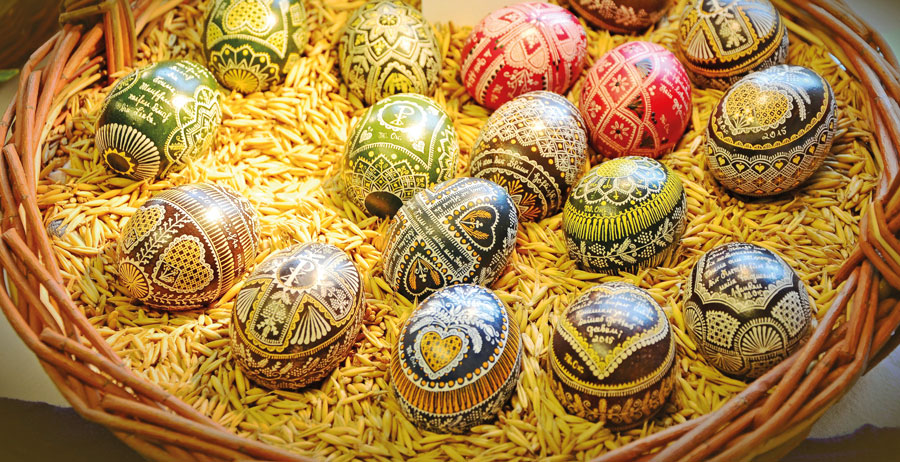 Easter is a busy and important time in the UK calendar. Celebrated on the first Sunday after the first full moon of spring, this year Easter Sunday falls on the 27th March. It is a most important Christian festival, when Christians celebrate the resurrection of Jesus following his crucifixion. However, Easter in Britain began before the arrival of Christianity, with the celebrations of the arrival of spring and the fertility that the season brings. It is believed that the word ‘Easter’ comes from the name of the Anglo-Saxon goddess of the dawn and spring Eostre.
Alongside the religious and spiritual meaning of Easter, there are many traditions surrounding the spring festival that families have followed for generations. Let’s have a look at some of the popular, and more obscure traditions that take place in Britain to celebrate Easter. EASTER EGGS
Easter Eggs are probably the most familiar of all Easter traditions and particularly popular with children! Our junior reporter Selina has had the incredibly difficult job of tasting lots of eggs to bring you a selection of ones she recommends! Did you know that Easter eggs weren’t always made of chocolate though? This tradition goes back centuries, as eggs are the perfect symbol of spring, fertility and new life. Before chocolate eggs became popular, people used to exchange hard boiled chicken eggs that had been dyed in various colours and patterns to represent the bright colours of spring and light. An old traditional game involved rolling hard boiled eggs down a hill, and whoever’s egg went the furthest or stayed uncracked the longest won. Some villages in England still carry out this custom today, but you are more likely to see children on a hunt for eggs of the chocolate variety that have been hidden by the Easter Bunny.
EASTER BUNNY
In the UK today, children are told that if they have been good the Easter Bunny will leave chocolate eggs for them. The rabbit has always been a symbol of fertility, and the hare was allegedly a companion to the goddess Eostre and the ancient moon goddess. The tradition of the Easter Bunny though appears to originate in Germany where he is mentioned in 16th century writings. The first edible Easter bunnies, made of pastry and sugar also appeared first in Germany in the early 1800’s. Hare hunting used to be a common pastime at Easter but thankfully this is no longer the case.
HOT CROSS BUNS
Hot cross buns were first baked in England to be served on Good Friday to mark the end of Lent. Historically, only plain buns were eaten during Lent, so the fruit and spices added were a real treat after the period of restriction and fasting. The sale of spiced breads was forbidden during the reign of Elizabeth I except at burials, Christmas or Good Friday. The first definite record of hot cross buns comes from Poor Robin’s Almanac in 1733 which listed a London street cry saying ‘Good Friday comes this month, the old woman runs. With one or two a penny hot cross buns.’ There are many superstitions surrounding hot cross buns such as it is said if they are taken on a sea voyage they will protect against shipwreck! These days, hot cross buns are enjoyed toasted and buttered and come in a variety of flavours. SIMNEL CAKE
This light fruit cake has been eaten since medieval times as a way of breaking the Lenten fast. The cakes became a tradition for Mothering Sunday when young girls working in domestic service would bake one to take home to their mum on their day off. Different towns have their own recipes but it typically contains dried fruits, zest and candied peel, and is topped with marzipan with 11 marzipan balls – one to represent each of Jesus’ disciples minus Judas.
EASTER BONNETS
It was English tradition to wear new clothes at Easter in harmony with the renewal that spring brings. Poor Robin says in his 18th century almanac “At Easter let your clothes be new, Or else be sure you will it rue.” This suggests the notion that bad luck would afflict those without anything new at Easter. In more recent history, ladies would purchase elaborately designed hats decorated with flowers to wear for church services. Even more recently, it was common for primary school children to decorate Easter bonnets for a parade at school. They would be decorated with everything representing spring and Easter such as baby chicks and flowers.
STRANGE EASTER DAY CUSTOMS In Ripon in the late 18th century, boys would run around the streets after the church services of Easter Sunday to take the buckles from the shoes of every female they could find. This would continue until midday the following day when the females would then do the same to the men until the Tuesday evening. Similarly, in Durham in the early 19th century, boys would gather and take off the shoes of ladies and girls saying ‘pay for your shoes if you please’. If they did not get a penny or two they would carry them off! Again, the females returned the favour the following day, but if a man wore boots and would not pay, the girls would steal his hat and run off, or throw and hand it about until he paid to win it back.
Regardless of how you celebrate Easter this year, I am sure it will involve chocolate in some shape or form, rather than the stealing of shoes! If you are stuck for choice of which Easter egg you fancy this year, then read on for Selina’s recommendations.