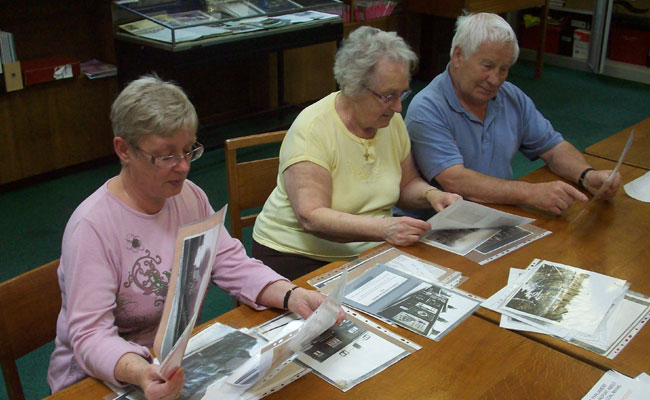 The East Leeds History & Archaeology Society was formed in 1997 and exists to research and promote knowledge of the past through lectures, displays and a twice-yearly publication (The Leeds History Journal). In addition, the Society also runs the East Leeds Heritage Centre at Cross Gates Library, with displays reflecting the history of Leeds. We also hold an extensive range of parish records from churches in Leeds, and since 2004 have run a Family History research service, providing information for family historians both nationally and internationally.

During 2013, as well as our usual mix of Monday evening meetings with topics ranging from the excavations at Star Carr, the oldest house in Britain, to the history of the Yorkshire Luddites, we were busy with our normal activities of local history talks to schools and other groups.

Two schools visited the Heritage Centre for talks about local history and we also gave a talk at Seacroft Library to pupils from Beechwood Primary. At the beginning of May, during Local History Month, we delivered an illustrated talk on the history of Cross Gates to a large and appreciative audience in the Heritage Centre.

The most exciting project of 2013 was the Barnbow Memorial Garden Design Competition. Working with staff from the Parks and Countryside Department of Leeds City Council we approached local schools to design a flowerbed surrounding the Barnbow Memorial in Manston Park. The standard of entries was very high making it difficult to choose winners. However the entry by Keris Wilson, featuring a dove of peace, was finally selected. Prizes were also offered for second and third places. The winning design was planted in the park, and on Friday 14th June a presentation ceremony was held there when MP George Mudie, accompanied by Councillor Pauleen Graham presented prizes supplied by the society. As a follow on to this we provided information to Leeds City Council for a teachers information pack about Barnbow which was launched in December 2013.

In July, as part of the 100th anniversary celebrations of the present Manston St James’ Church, we were asked to give a short talk on the history of Cross Gates and Manston.

September saw us invited to the inaugural meeting of Shadwell Historical Society who had approached us for advice on setting up their society, and we wish them well. We also attended the Older Persons Event organised by the council at Christ Church Halton, where we had a display of aerial photographs of the area. This evoked much interest, with some people not recognising places they had known for over 40 years when viewed from the air.

Following an illustrated talk by Alan Humphries of the Thackray Museum, we attended a newly developed talk at the museum, followed by a free tour. Our November meeting, the last of the season, was attended by a record number of members and guests who enjoyed mince pies afterwards. We have recently set up two new displays in the Heritage centre in Cross Gates library, one of which is designed to commemorate the 100th anniversary of the beginning of World War One. This display has artefacts from the war and features two shell stoppers recently found at the site of the Barnbow Munitions Factory.

In 2014 we will again be running the Garden Design Competition and will be approaching the schools with details in the Spring. There is a varied programme of speakers in the pipeline including such topics as the secret life of Charles Dickens and the history of snuff. We are particularly looking forward to February when as part of the 75th birthday celebrations for Cross Gates library we will be presenting a new talk in the Heritage Centre. We expect to enjoy a busy and exciting year, with interesting talks and activities.

Our meetings, held in the church hall of Cross Gates Methodist Church, are open to everybody and new members are always welcome. For details please visit our website on www.elhas.org.uk