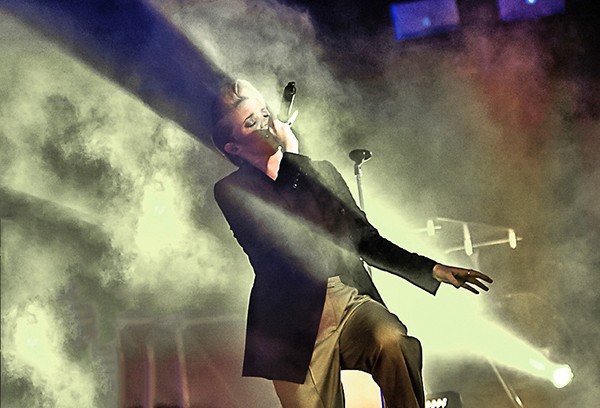 At the beginning of November Leeds saw two of the most admired female performers of 2014: Both have had critically acclaimed records out during the year and both have sold out almost everywhere they have played.

However, that is where the similarities end. Paloma Faith played to a sell-out audience at the O2. A brash and confident performance of mostly new material from her new album A Perfect Contradiction. Which may have been the reason why there was something of a lukewarm reception for the majority of the concert with perhaps Only Love Can Hurt Like This receiving anything like a rapturous welcome. Maybe the next time in Leeds early next year the material may have been digested by her devotees and indeed by Paloma herself maybe.

The following night not two hundred yards away Elly Jackson the singer who performs as La Roux completely transfixed a full house at Leeds Beckett University.

She has a burgeoning roster of killer material that she is clearly comfortable with performing and she performed it quite brilliantly too with In For The Kill and Bulletproof vivaciously driven into the consciousness. If you compared the two divas La Roux and her performance would be the one you’d prefer to see again. But here’s the paradox and maybe the thin line between success and stardom. Whereas Paloma is confident giving a below par set La Roux seems to have lacked the confidence to believe that she was actually giving one of the best performances in Leeds this year.

The camaraderie of the audience in responding to Jenna McDougall’s repeated “Aussie, Aussie, Aussie” is indicative of the atmosphere. There is an unmistakable feeling of understanding directed towards the various crowd interactions by the Tonight Alive front-woman, be they somewhat naïve and misguided at various points. Tonight Alive may appear superficial at times – a particularity associated with the pop-punk genre in general – but are determined to persuade the audience otherwise. Following a cautiously honest rendition of ‘Amelia’ the meaning in the lyrics is evidently not lost on any of the band members.

Musically Tonight Alive are on top form, juggling with changes in pace from track to track. The guitars and drums have a tendency to drown out the vocals during the softer moments, and indeed during the speedier vocal sections, yet McDougall demands the majority of the attention by raising herself over the audience; front and centre. Presumably used to this, the remaining band members continue to provide close-to-flawless support to the powerful vocal lead. This power is enhanced throughout by a habitual echo effect which at times is overused, however there are only small lapses in vocal quality – again, mostly during the faster moments – which brings the prowess into question. As a whole the sound is aptly led by the dominating vocal chords.

Playing through a set list containing the majority of their new record The Other Side, Tonight Alive deliver a crowd-pleasing performance. The sheer magnitude of the vocals and the ability of the remaining four band members ensures that there were a host of spine-tingling moment. At times, Tonight Alive demonstrate the ability and dedication to become the next-big-thing in the female fronted pop-punk world and deservedly so too:

There’s lots of terrific music around in December! So much in fact that it is a little difficult to decide on recommending just one to go see: There has been a surfeit of reunions this year. One that may have escaped your notice however is that of the band Cast: No doubt they’ll be performing the endlessly good Walk Away at Brudenell Social Club on the 19th December.

Speaking of blasts from the past Human League are at Leeds Academy on the 8th December, whilst Deacon Blue appear at City Hall in Sheffield on the same evening. A tricky decision: You may have to travel to Manchester but boy will it be worth it to see Chrissie Hynde.

The Pretenders front woman will play songs from her illustrious back catalogue as well as her new critically acclaimed solo album ‘Stockholm’ The new single ‘Adding The Blue’ – will be released on December 1st, alongside a deluxe version of ’Stockholm’.

The deluxe version will feature tracks from her recent triumphant iTunes Festival performance at the Roundhouse in London, which The Independent described as “a night of killer hooks from pop royalty”.