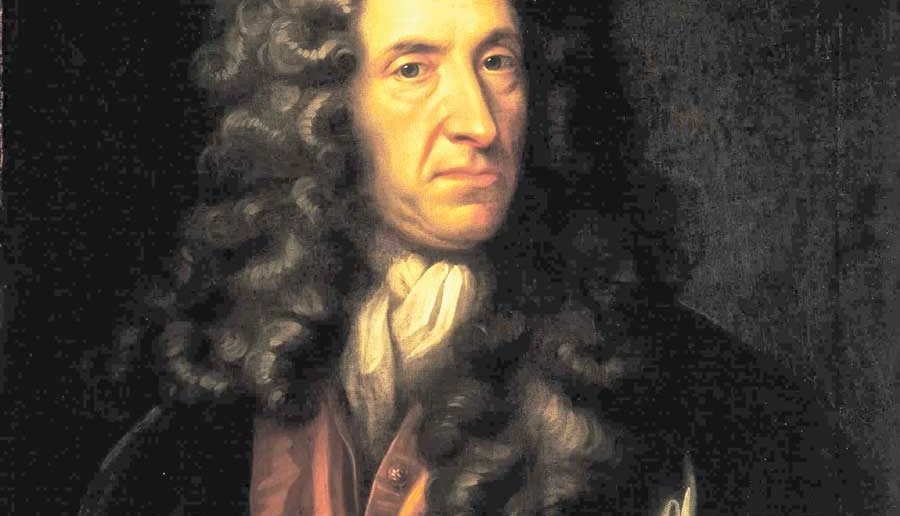 of York, of a good family though not of

that country, my father being a foreigner

who settled first at Hull…

Thus began the story of ‘Robinson Crusoe’ loosely based on Alexander Selkirk, a Scottish sailor abandoned in 1704 on the island of Juan Fernandez at his own request after a dispute with the ship’s captain.

The author of this classic tale was Daniel Defoe, born Daniel Foe about 1660, son of a London butcher, later adding ‘De’ believing it sounded aristocratic. He is remembered chiefly as the author of ‘Robinson Crusoe’ part of which was written in Halifax when staying at the Rose and Crown Inn.

Defoe had a vivid imagination as there’s no evidence he travelled further than Spain. He said of Halifax:

“ Having passed the Calder at Sorby (Sowerby) Bridge,

I now come to the most populous parish, or Vicarage

in England, for it is but one though twelve miles in

diameter: but it has twelve or thirteen chapels of ease,

besides meeting houses, which they also call chapels,

being comfortable in fashion to them.”

Defoe’s life was extremely political, and almost fanatical on religion. Had he concentrated on writing novels instead of writing political pamphlets, his output  might have been enormous, and if he hadn’t been persecuted over his pamphlets he might never had the time to write ‘Robinson Crusoe.’

He was a wool merchant firstly, afterwards a brick and tile-maker. He became bankrupt after a few years but paid his creditors off. It was the government of King James II that really made Defoe sit up. Furious about the treatment of the Dissenters, his attention was diverted from business both by literature and politics. In 1685 he joined the Duke of Monmouth’s rebellion which became a fiasco when the rebels were brought to trial, and it is a mystery how Defoe escaped conviction and execution.

During William and Mary’s reign and then William III ruling alone when Mary died, Defoe became popular at court. A close friend of the king, he was appointed accountant to the commissioners, for managing glass duties – holding this job for four years until duties were abolished and he became unemployed.

He began to write religious pamphlets and one entitled ‘Occasional Conformity of Dissenters’ caused indignation. Defoe turned to business again, planning the manufacture of pantiles hoping to capture the export trade of the Dutch manufacturers. This venture was going badly when he was arrested over the pamphlet, ‘The Shortest Way with the Dissenters.’ This was after the death of William III who had allowed Dissenters to take public office if they were willing to attend a Church of England service. It was a group of reactionaries who advocated harsher measures against Dissenters and banned them from public office. These reactionaries known as ‘high-fliers’ had rigid principles, Defoe agreeing with them that Dissenters should be banned from public office believing that any Dissenter who attended the Church of England must be a cowardly weakling anyway.

This pamphlet was a mockery on Defoe’s part arguing that they should be hanged or banished. He was making fun of the reactionary cause by taking it to an extreme. The result was unfortunate for many of the ‘high-fliers’ who took the pamphlet personally, and even one clergyman said he valued it above all books apart from the bible.

The Dissenters were furious thinking that a ‘pogrom’ was about to break out and when it emerged that Defoe had written the pamphlet intending it as a satire, the anger then came from the ‘high-fliers.’ Parliament issued a warrant accusing him of labelling the ‘high-fliers’ by making them out to be bloodthirsty lunatics and Defoe went into hiding. The warrant described him:

of a brown complexion and dark brown coloured

hair, but wears a wig: a hooked nose, a sharp chin,

grey eyes, and a large mole near his mouth…”

A £50 reward was offered, and within months he re-appeared and gave himself up. He might have escaped punishment if it hadn’t been for names obtained of well-known High Churchmen to endorse the pamphlet. Defoe’s defence was badly conducted and in July 1703 he was fined 200 marks, sentenced to be pilloried three times, imprisoned indefinitely, and to find sureties for his good behaviour for seven years. He had an easy time in the pillory, no unpleasant objects were thrown at him, instead, sympathisers brought food and drink, and luckily for him, ear lopping pillory victims had ceased. Defoe was imprisoned for a year and regarded a national hero. In prison he launched his own newspaper, and meetings with ‘ladies of the night’ and thieves inspired him to write the novels ‘Moll Flanders,’ Captain Singleton,’ and ‘Colonel Jack.’

In 1706 he went to Scotland at the behest of the British government headed by Robert Harley 1st Earl of Oxford. Defoe had appealed to Harley whilst in prison, who secured his release if Defoe agreed he would operate as a ‘spy’ and pamphleteer.

In 1719, Defoe published the novel that he would be forever remembered ‘The Life and Strange Surprizing Adventures of Robinson Crusoe of York, Mariner,’ to give its full title. Defoe was in his fifties and in bad health but financially sound and in 1724 built a house at Stoke Newington and had other properties too.

There has always been a mystery regarding his death, but for three years leading up to it, he must have been in great pain suffering from some incurable illness. It’s a fact that when he died, no will or letters of administration were taken out by creditors nor did he die at home. It’s been suggested that he went into hiding fearing reprisals from the Jacobites for his earlier actions as a government agent and died in Ropemakers Alley, Moorfields on April 26th1731 and buried in Bunhill Fields.