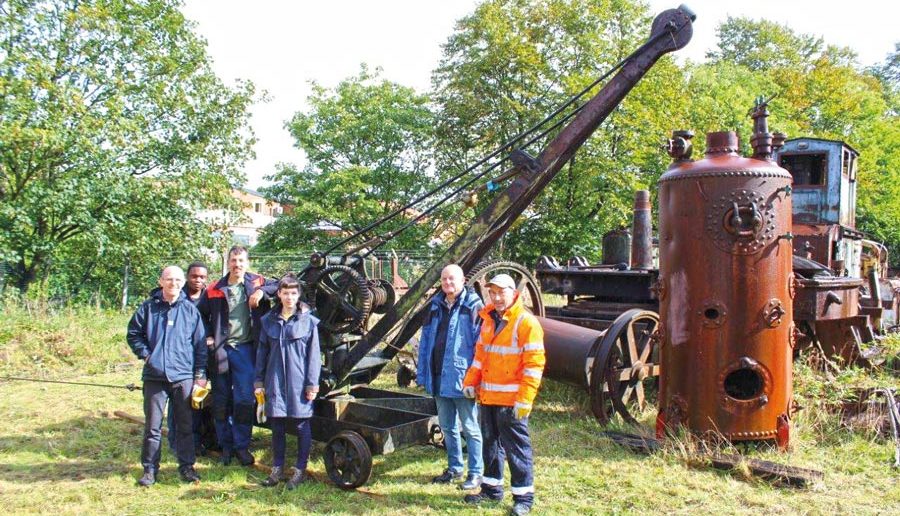 This month I thought I would look at two exhibitions in Leeds – one on now, and one coming soon, that show the diversity of important industries which have grown the city over the years from a minor settlement to the bustling centre of commerce it is today.

The first exhibition is at Armley Mills Industrial Museum, highlighting the important role a piece of tried and tested Leeds engineering played in keeping the proud story of Yorkshire’s railways on the right track. Even in retirement, Leeds Industrial Museum’s stalwart crane had one last uplifting tale to tell after grabbing the imagination of a local business.

Representatives from Pudsey-based firm Wellman Booth visited the museum in Armley to donate a miniature replica of the historic crane as well as a series of eye-catching illustrations by renowned artist Helen McKie, depicting the efforts of local wartime munitions workers.

The generous donation was sparked by a recent museum project working with volunteers to restore and conserve the museum’s railway hand crane, which was made back in the 1880s by one of Wellman Booth’s forerunners Thomas Smith and Sons of Rodley.

Along with Joseph Booth and Brothers, the company helped the city build an international reputation for making cranes which were used across Britain and around the world back in the 19th Century.

John McGoldrick, Leeds Museums and Galleries’ curator of industrial history, said: “The history of our railways is dominated by engines and locomotives for obvious reasons, but cranes like ours played a crucial role in keeping the industry moving, literally doing the heavy lifting so that companies across the UK could flourish.

“More importantly, they’re an example of how much Leeds became a centre for engineering excellence, setting the standard for reliability and efficiency and building a reputation which would last for more than a century.

“We’re absolutely thrilled that Wellman Booth have helped us bring the story of our crane and this important piece of the city’s industrial heritage to life.”

The model crane, which will now be displayed at the museum, was made by a former Joseph Booth and Brothers employee Frank Midgley, a keen modeller who worked in the firm’s tool room from before the 1950s.

The Helen McKie illustrations were commissioned by Joseph Booth and Brothers and show munitions workers, including women, making shells at the Rodley factory during World War Two.

Helen McKie was a well-respected society illustrator known for creating artwork for railway posters. An archive of her work resides at the Victoria and Albert Museum in London.

Historic photos show how Leeds became top of the shops The second exhibition titled Fast x Slow Fashion: Shopping for clothes in Leeds, 1720 – 2020 will be at Leeds City Museum next February and will reveal a much different but just as important industry that has helped to shape the city of Leeds. There is a chance for members of the public to get involved now to help tell the story of the evolution of Leeds high street and curators are calling for stories, photographs and clothing to be submitted.

Historic images showing the changing face of Leeds’s high street have been revealed ahead of the new exhibition telling the story of the city’s one of a kind retail revolution. The remarkable photos show Leeds landmarks including Briggate and The Headrow as they looked in the 1870s, early 20th century and 1970s. It is hoped they will capture the imaginations of shoppers past and present and encourage them to contribute to the upcoming fashion-themed exhibition at Leeds City Museum.

Fast x Slow Fashion: Shopping for clothes in Leeds, 1720-2020 will explore how and why shopping for clothes has changed over more than 300 years and how a voracious passion for fashion saw Leeds grow to become one of the country’s biggest modern retail destinations.

Curators are asking for help picking out some key outfits, photographs or memories of shopping in Leeds which will then be used to showcase the different ways people shopped for clothes from the 18th Century, when the city was a key part of the textile trade, to the 21st Century, which has seen the opening of some of Europe’s biggest shopping complexes.

Contributors can submit everything from eye-catching clothes and nostalgic photographs to personal stories about Leeds and its constantly evolving retail offering.

Vanessa Jones, Leeds Museums and Galleries’ assistant curator of costume and textiles, said: “Fashion and retail have been cornerstones of Leeds and its economy for hundreds of years, with Yorkshire being a global leader in the textile trade and the birthplace of some of the world’s most recognisable clothing brands.”

As well as looking at the city’s retail scene, the exhibition will examine the rise of ‘fast fashion’ and the growing calls for more sustainably produced clothing.

Alongside submissions from the public, displays will also include some of Leeds Museums and Galleries’ most fascinating historic fashions.

Public submissions could include memories of clothes shopping in Leeds, garments worn and purchased in Leeds now, photographs of people shopping in Leeds or different ways people shop, both online and by hitting the high street. Curators would particularly like examples of clothing that was bought during Whitsuntide, clothing that was bought or worn at a NoLoGo event in 1994 and anything that was purchased in a Leeds based department stores, particularly Lewis’ and Schofields.

The two exhibitions are sure to appeal to many with an interest in the history of Leeds, and although both very different, show how the city has changed over the years. The city centre has undergone huge development over the last decade or two, making it almost unrecognisable in some parts from when I was a child. These exhibitions show how Leeds has always evolved, changed and moved with the times, remaining at the forefront of innovation and industry throughout the years.

For more details on Leeds Industrial Museum and the crane exhibition, please visit;

To get involved and share your photos and memories for the upcoming Fast x Slow Fashion exhibition, tag #LeedsThreads on social media or email vanessa.jones@leeds.gov.uk