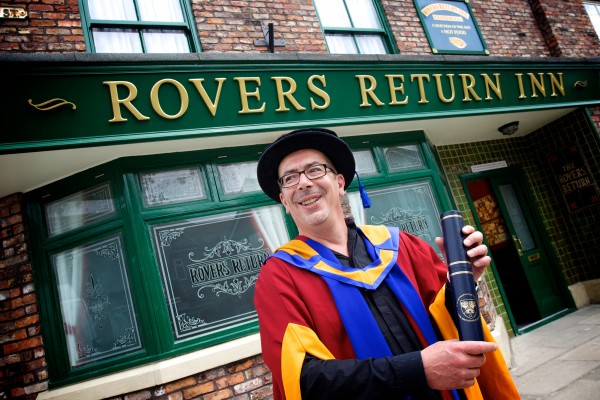 Producer Stuart Blackburn swapped the Coronation Street cobbles for a cap and gown when he was awarded an Honorary Doctorate.

Leeds-based Stuart, who is currently at the helm of Britain’s longest-running and arguably best-loved soap opera, took up the position at Coronation Street last year, following a two-year term as Producer of Emmerdale.

[private]As well as overseeing the move of 500 cast and crew from their central Manchester studios to a new state-of-the-art studio at MediaCityUK, since joining Coronation Street, Stuart has been responsible for reams of headline-grabbing screen action – including the controversial storylines surrounding the departure of much-loved characters Hayley Cropper and Tina McIntyre.

Stuart, who was awarded an Honorary Doctorate of Literature for his contribution to the arts, commented: “This award today means absolutely everything. There’ve been a lot of telly awards and in a way you don’t expect them, you aspire to them – but this (honorary award) came completely out of the blue and I don’t know whether to laugh, cry or do both!

“Working on Coronation Street is immense – any day of the week 300-400 people are looking to you for answers. It has the most famous cast in the country and a legacy of fifty-three-and-a-half years, so the pressure is immense. But it doesn’t matter how many hours I do or how many days I do, I still wake up in the morning and think, as my dad would say – ‘it’s better than a proper job!’”

Speaking about making the switch from Emmerdale to Coronation Street, Stuart said: “I loved working on Emmerdale and the people there are fantastic. I left after about 18 months and it was my choice, but it was heartbreaking, I should have been there at least another year, maybe two and I felt like a real traitor – but the chance to do Corrie may have never come up again.”

He added that one of his favourite storylines he had worked on was during his time at Emmerdale.

“It was about the character Aaron Livesy – a young working class lad, profoundly homophobic – coming to terms with the fact that he was actually gay. We pretend that in this modern world there is no homophobia and that coming out now is easy. Rubbish. It’s still incredibly tough for hundreds and thousands of young working class lads and it was a storyline that made a difference to people’s lives.”

Stuart continued: “There’ve been several highlights in my career – obviously getting the job at Emmerdale, then getting the job at Coronation Street – getting a BAFTA award this year, but honestly, genuinely, I’m not creeping – the highlight is today – getting this honorary award. It was just so unexpected and overwhelming.”

Originally from Keighley and now based in Horsforth, Stuart’s roots remain firmly in Leeds as he commutes to Manchester for Coronation Street.

He has written stories and scripts and story-edited for many major soaps and dramas such as The Bill, Eastenders, Casualty and Ballykissangel.

Stuart worked on ITV soap Emmerdale as Storyliner and Story Editor before moving to the Street as Story Editor and latterly Series Story Editor. He returned to Emmerdale in 2011 as Producer, before it was announced in October 2012 that he’d once again return to Britain’s most famous fictional street – as Producer – in January 2013.

Before making the move back to Corrie, Stuart oversaw Emmerdale’s live hour-long episode to mark the 40th anniversary of the Yorkshire-based soap.

Leeds Metropolitan University Vice Chancellor, Professor Susan Price, said: “Having worked on some of the UK’s best-loved television shows – and now at the helm of the UK’s longest running soap opera -Stuart’s drive, talent and ambition will be of great inspiration to our new graduates, ready to embark on the first steps of their own career ladders. In the last 12 months Stuart’s hard work and commitment to Coronation Street, has seen the show reap the rewards with numerous television awards and viewing figures peaking at more than 10 million.”

Leeds United legend Eddie Gray MBE, who was both player and manager at the club, has been awarded an Honorary Doctorate of Sport Science. Eddie had an illustrious 20 year career with the football club where he made 561 appearances and scored 68 goals from his position as winger. He was never booked in his entire playing career.

He commented: “To be here at Leeds Metropolitan University and to receive such a prestigious award makes me feel very proud; I’m absolutely delighted for myself, my friends and my family.”

Giving advice to the graduating students, Eddie continued: “When I came down to Leeds, the one thing that Don Revie taught me was to have the confidence to believe in your own ability and have the courage to use it and never walk out the door thinking to yourself, I could have done a little bit better.  Give it your all and if it doesn’t work out, you know you’ve tried your best.”

He was a pivotal part in the Leeds United team of the 1960s and 70s and, when his playing days neared an end, he assumed the role of player manager in 1982 and stayed at Elland Road as manager until 1985.

After leaving Leeds United, he had spells managing both Rochdale and Hull in the football league before returning to Elland Road in the 90s as youth team manager. He later took up the post of reserve team boss before becoming David O’Leary’s number two in 1998, where he was a part of the successful Leeds side that finished in the top four of the Premier League and had great runs in the Champions League.

Eddie, who has a place in both the Scottish and English Football Halls of Fame and works for LUTV (Leeds United Television), is still held in high regard by all Leeds United fans and remains a name synonymous with the club.

Leeds Metropolitan University Vice Chancellor, Professor Susan Price, said: “Eddie Gray is much respected in the world of sport and a name synonymous with Leeds United, a football club to which he has shown great commitment throughout a sporting career spanning six decades. It is fitting to recognise Eddie’s inspiring achievements and extensive contribution to sport with this Honorary Doctorate, alongside our students from the School of Sport.”[/private]