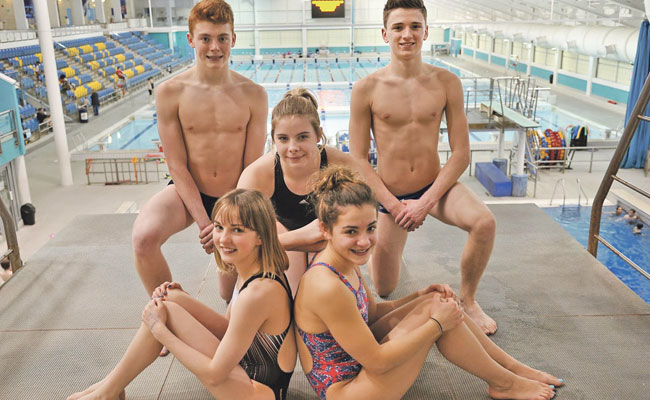 Record-breaking young divers have made a big splash by bringing home seven gold medals from a top national competition.

The youngsters from the City of Leeds Diving Team returned from the Great Britain National Cup with an impressive total haul of 15 medals.

Jack Laugher, 18, also set a new British record with his first place showing in the men’s 1m event, taking the gold with a score of 480.60.

Not to be outdone, 17-year-old Alicia Blagg won gold and set a new record in the women’s 1m event, scoring 287.5 and becoming a junior champion in the process.

Adrian Hinchliffe, head coach of the team, which is based at the John Charles Centre for Sport, said:
“This was a fantastic performance- not just for our established team members, who get a huge boost going into other competitions, but for the younger divers who are working hard to push on to that next level.

“This is definitely looking like it’s going to be our most successful build-up to an Olympics as we approach Rio 2016 and we’re consistently seeing top level divers coming out of Leeds.

“That’s because of a combination of some real talent in the city and the fact that we have great facilities and coaching that puts us on another level to the teams we’re going up against. We also have the continued support of our partner British Diving.”

The country’s most successful diving club, the City of Leeds Diving Club has more than a hundred members.
Divers range from beginners to Olympic athletes, with a number of different squads using the facilities at the John Charles Centre.

The club itself is run by a committee of parents who help to organise two major competitions each year- the G-star Championships and The White Rose Diving Invitational.

Councillor Lucinda Yeadon, Leeds City Council’s executive member for leisure and skills, said:
“Our young divers really have outdone themselves with this amazing team performance and the City of Leeds squad just keeps on going from strength to strength.

“As this record-breaking display shows, Leeds is the national standard bearer for diving excellence and the world class talent that continues to come through the ranks at the John Charles Centre is going to make the build-up to the next Olympics really exciting for our team and our city.