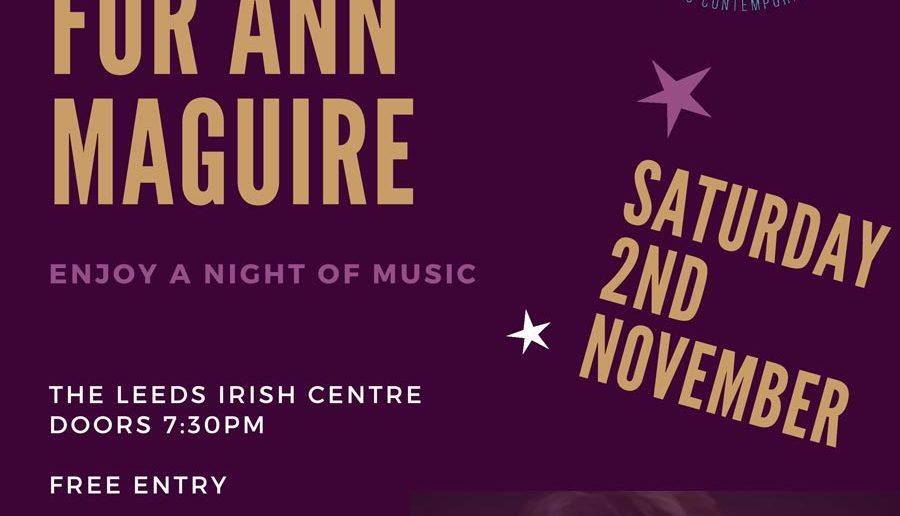 On Saturday 2nd November at The Leeds Irish Centre, two Yorkshire based choirs and a choir from Galway in the west of Ireland will play host to a wonderful night of entertainment to honour school teacher Ann Maguire. The free event, which starts at 7:30pm is being organised and hosted by The TribeTones, Galway’s Contemporary Choir. The 70 piece Irish choir was formed in March 2018 and is directed by Leeds native Sean Rowland, a former pupil and friend of Ann Maguire. Rowland moved to Ireland in 2007 and since the death of Ann Maguire has always wanted to honour her memory in an evening of song.

“Ann loved her choir. She gave it 100% and encouraged students from all over the school to join. It was a refuge for many and Ann often took individuals under her wing to nurture their individual musical talents”

The TribeTones decided earlier this year that they would love to visit Leeds and pay tribute to the school’s much loved teacher and director of the Corpus Christi School Choir.

“My choir have always known Ann’s story and I often remind them that without her influence and mentorship, it’s very unlikely The TribeTones would exist. There’s barely a rehearsal goes by when I don’t think of Ann and the positive influence she had on so many,” said Sean.

Last year The TribeTones also recorded an original Christmas single in her memory, raising over €8000 for Irish national charity “Rosabel’s Rooms” A charity established to provide comfort and financial assistance to families who have suffered from child loss.

Also performing on the night are the White Rosettes, an award winning all female A cappella group (of which Ann was a member for a short time) and The Steeton Male Voice Choir, some of whom met Ann while studying together in the 70’s. In addition there will be entertainment from local duo “The Heathers” and a performance from The Helen Rowland Academy of Irish Dancing.

There will be a complimentary hot supper, DJ and late bar and the aim on the night is to raise as much as possible for The Ann Maguire Arts & Education Fund via donations and raffle etc.  Tickets are not required but the event is expected to be well attended so early arrival is advised to avoid disappointment. For more information visit The TribeTones on facebook, email Sean on thetribetones@gmail.com or phone the Irish Centre on 0113 248 0887