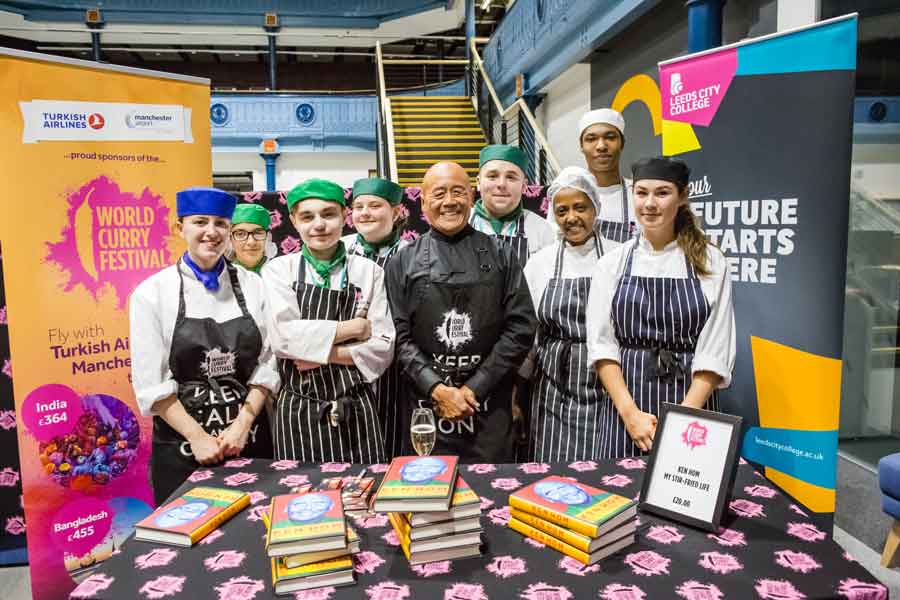 The legendary Chinese American chef Ken Hom OBE was in Yorkshire to receive a lifetime achievement award at the World Curry Festival’s grand finale.
The award presentation marked the close of the festival, which saw over 50 different events taking place in Bradford and Leeds.
The finale was held at the fabulous Leeds City College Printworks Campus. A few select guests, as well as students from the college’s catering and hospitality department, were there to see Ken receive his award, which was presented by Sir Gary Verity, Chief Executive of Welcome to Yorkshire, and patron of the World Curry Festival.
Travelling from Rio, via Paris, to Yorkshire, Ken said: “It is a real privilege to be here at the World Curry Festival’s grand finale, to receive a lifetime achievement award by an organisation that prides itself on promoting Asian cuisine in the UK, and internationally.”
Leeds City College students played a key role in the event, preparing and serving a selection of delicious Asian-inspired canapés. They also watched Ken as he demonstrated how to cook a healthy stir-fried curry beef using his famous Ken Hom wok.
“An appearance by the legendary Ken Hom OBE is a wonderful way to close this year’s festival,” commented Zulfi Karim, Founder of the World Curry Festival. “We would like to thank everyone who has supported us, in particular our sponsors Coca Cola Enterprises, Bradford Metropolitan District Council, Morrisons, Mercedes-Benz of Bradford, Turkish Airlines and Manchester Airport.”
From humble beginnings, growing up in poverty in Chicago, Ken went onto become one of the world’s most celebrated TV chefs. He is largely responsible for showing the British public how to cook Asian food, and today is an ambassador of ‘Britain is Great’. He recently opened a 92-seat MEE restaurant in Rio de Janeiro, which became one of the first restaurants in Brazil to receive a Michelin star. The event coincided with the launch of Ken’s memoirs – My Stir-fried Life.