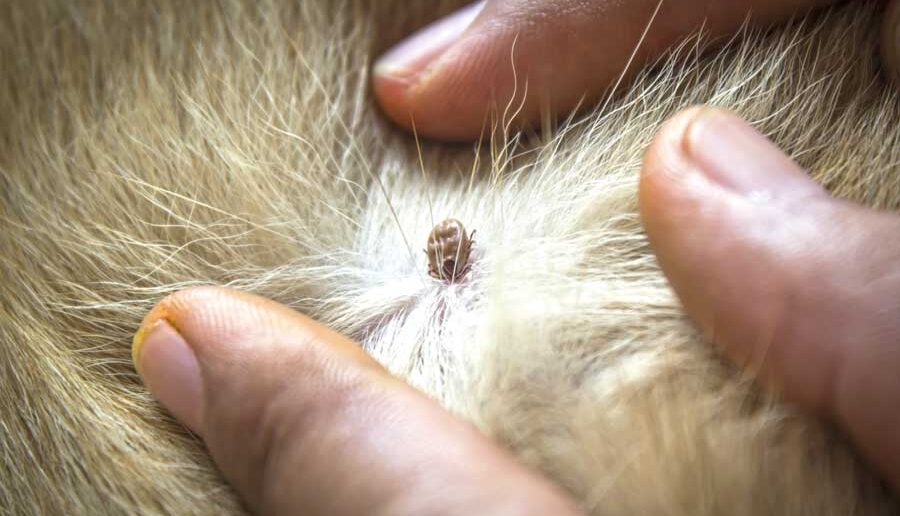 The tick population increases between spring and autumn. The nasty parasites latch onto a person or animal and grow in size over several days before dropping off. These blood-sucking ticks aren’t just unpleasant – they can be dangerous to people and their pets.

Ticks can carry and spread diseases, including Lyme disease, which is a debilitating bacterial illness. It can cause symptoms including fever and pain, as well as swelling in the joints and meningitis. While the proportion of ticks that carry the disease is relatively low, it’s still important to be careful when you’re out with your pet.

Pet wellbeing charity PDSA has put together top tips for prevention and treatment of tick bites. Removing ticks early can reduce the chances of your dog catching an infection.

●
Some flea treatments can also kill or repel ticks. Speak with your vet about the best treatment to give your dog or cat.

●
Ticks are more likely to be found in moorland and woodland areas, especially in long grass. Stick to paths and avoid letting your dog wander in deep undergrowth or grass.

●
After walking your dog, or when your cat comes indoors, check their fur for ticks – especially between your pet’s toes and on their faces, ears, and belly. Their bite doesn’t hurt so they aren’t always noticed immediately if you don’t actively check for them.

●
Hedgehogs and foxes are common tick carriers, meaning pets in urban areas with fox populations are also at risk.

●
When they first attach, ticks are normally the size of a small pinhead. As they suck blood, they can grow to the size of a pea and may look like a bluish-grey, pink or purple lump.

●
If you spot a tick on yourself or your pet, it must be removed properly as soon as possible. Make sure you know the correct technique before attempting to remove a tick from your pet, otherwise parts of the tick can get left behind in the skin. If you’re not sure how to do this, speak to your vet or vet nurse as they will be happy to show you.

●
The easiest way to remove a tick is usually using special ‘tick tweezers’. Remove them according to the packet instructions. The sooner the tick is removed the better.

●
Common myths suggest dealing with ticks by squeezing a tick’s body, destroying it with a lighted match or putting Vaseline on a tick to suffocate it – these methods actually increase the risk of Lyme disease as they make the tick ‘regurgitate’ from shock, so don’t be tempted to put them into practice!

●
A very small percentage of dogs that have been bitten by a tick will develop Lyme disease. The longer the tick is attached the higher the risk.

●
Symptoms can include a rash, high temperature, joint pain or swelling, and lack of energy.

●
Remember that Lyme disease is spread by infected ticks, not from pet to person.