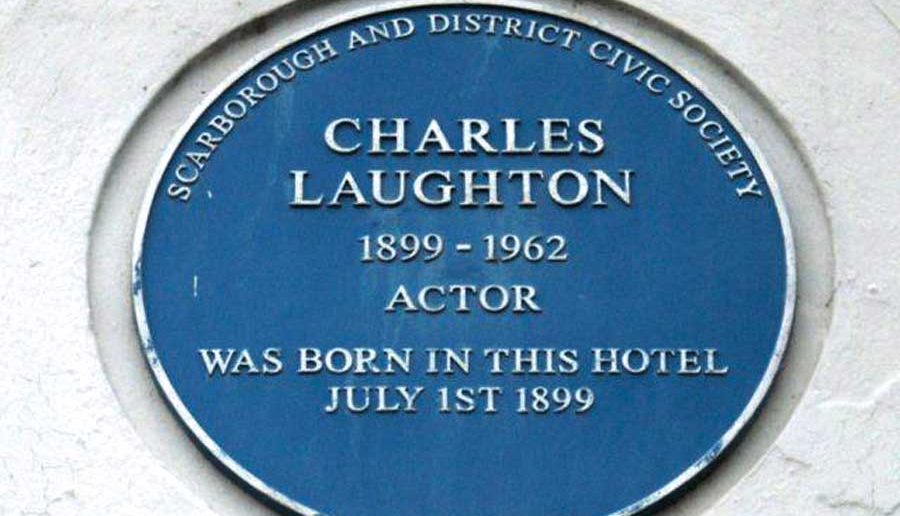 For those of a certain age, Charles Laughton conjures up images in the mind of cinema audiences of a grossly overweight King Henry VIII eating whole chickens to himself then throwing the bones over his shoulder in the film ‘The Private Life of Henry VIII,’ and who can forget him as Quasimodo in ‘The Hunchback of Notre Dame’ swinging on the bells of the Cathedral.

Charles Laughton was born in 1899 at the Victoria Hotel in Scarborough the eldest of three sons. His parents, Robert and Elizabeth had managed to create a thriving business there and later moved to the Pavillion and then on to own several hotels.

Charles, described as ‘fat and ungainly ’was educated at Stonyhurst College. He was at that time, destined to follow in his father’s footsteps in the hotel business. He was sent to the famous Claridge’s Hotel in London and during his time there he would visit theatres on a regular basis.

When he returned to Scarborough, he joined an amateur theatrical group. At this time his younger brother expressed envy at Charles’ position as the eldest son and heir to the business. It was a great opportunity for Charles to hand over the ‘reins’ to his younger brother and throw himself into the world of acting.

Charles Laughton entered the Royal Academy of Dramatic Art in 1925 and a year later he won the Bancroft Gold Medal. This was the time he met the Russian born and later British theatre director, Theodore Komisarjevsky who gave him the part of the servant, Ossip, in ‘The Government Inspector’ at the Barnes Theatre. Luckily for Laughton he then got the part of the pickpocket in ‘Lilian’ working with Ivor Novello and Fay Compton making a great impression on the stage.

Laughton was determined not to become type-cast and played many parts. One of the parts he excelled at was in the title role in ‘Mr Prohack’ written by Arnold Bennet. In 1929, Laughton married the actress, Elsa Lanchester with whom he appeared in the film ‘The Private Life of Henry VIII’ in which she played Anne of Cleves.

Charles Laughton and his wife went to New York in about 1931, a visit that led him to be offered parts and soon he signed a three -year contract with ‘Paramount.’ His fist part was that of a submarine captain in ‘The Devil and the Deep’ alongside Gary Cooper and Tallulah Bankhead. Following this he appeared as the Roman Emperor Nero in ‘The Sign of the Cross’ for Cecil B.De Mille.

At the beginning of  World War Two he wanted to return to Britain, however, on the advice of the British Embassy in Washington he was persuaded to stay in America to earn much needed dollars. This decision led him to become an American citizen in 1943. He and his wife Elsa Lanchester lived in Los Angeles and also had a cottage by the Pacific Ocean to which they would often retreat. It was here in the Hollywood Hills where Charles Laughton died on December 15th 1962 in Los Angeles and buried at Forest Lawn cemetery there.