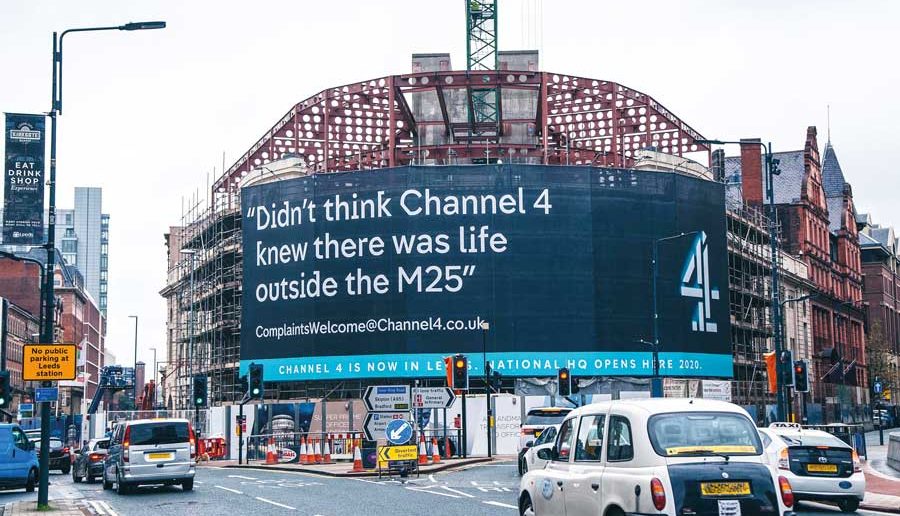 Channel 4 have now formally arrived in the region, marking the moment by opening the Westgate office, unveiling a new campaign across the Majestic building hoardings, which will be home to the National HQ once refurbished.

The new National HQ will accommodate staff from a range of different departments, including the Managing Director, Nations & Regions, programme commissioners, the new Digital Creative Unit, producing and commissioning content to reach audiences on digital and social platforms, and staff across a variety of creative, digital, operational and supporting functions.

“We have been working with Channel 4 and the 4AlltheUK strategy for a number of years now and I’m delighted that Channel 4 are officially here and expanding their presence in the region.

“Since the announcement of the National HQ location last October, the region’s creative industries have experienced significant growth. This sets the tone for what is to come in future months and years.

“The LEP has an increased role in supporting growth within the sector, through the launch of our #Grow scheme and enabling clear pathways for talent to maintain and grow the sector and underline the region’s position as a hotbed for creativity.”

“We are really at the start a new era for Channel 4, as we mark the launch of our National HQ here in Leeds. An era in which we will be rooted in and better connected to the lives of the communities that make up the UK.

“Channel 4 as an organisation will unearth more of the stories that define modern Britain. That will not just look and feel different but will think and behave differently. One that will reflect the whole of the UK and by doing so, become more creative, innovative, distinctive and relevant for the UK than at any point in our history.”

It certainly is an exciting new phase for Leeds City Region, with Channel 4 already acting as the spark for a number of expansions and investments.

Indie growth has been substantial;

New start-ups Hell Fire! and Wise Owl films have established themselves and the region has also seen significant inward investment from two of the largest Indies

Workerbee (previously Endemol Shine North) and The Garden, both opened bases in Leeds at the start of the year.

The wider sector ecosystem now has Leeds City Region firmly on its radar. The National Film and Television School (NFTS), BFI – Young Audiences and Content Fund and Pact (Producers Alliance for Cinema and Television) all now have bases here.

Diversity is proving to be high on everyone’s agendas, as Channel 5 have invested in two BAME led indies in the region: Meridian Line Films, an award-winning TV production company based in York as well as Heenan Bhatti, who is now running his own indie, after directing a number of award-winning documentaries.

Beyond Brontës was launched in April this year. Aimed at young people from diverse backgrounds to address under representation within the screen industries. Engagement with the programme has been high and the first group of 50 trainees have been recruited from across the region and attended an industry bootcamp. The team at Screen Yorkshire are now organising a variety of work experience placements and training courses to equip participants with crucial skills to help them start out in the industry.

Innovation has also been an area of focus since the announcement; Sky Studios recently announced an Innovation Hub is set to open at Leeds Dock, as well as DAZN unveiling plans to launch a virtual production facility in its Leeds’ broadcast centre.

It’s not just  innovation and ideas that are being accelerated though, its bricks and mortar too.

Infrastructure plans include a major new TV Studio in Leeds City Centre taking on the former Polestar Petty print works, the grade II Engine House development part of Tower Works at the South Bank is set to be a new production hub and of course the Majestic refurbishment, that will be the new home for Channel 4 National HQ later next year.

For details of how the LEP can help your business to #Grow, contact the Growth Service on 0113 348 1818 or visit the-lep.com/Grow