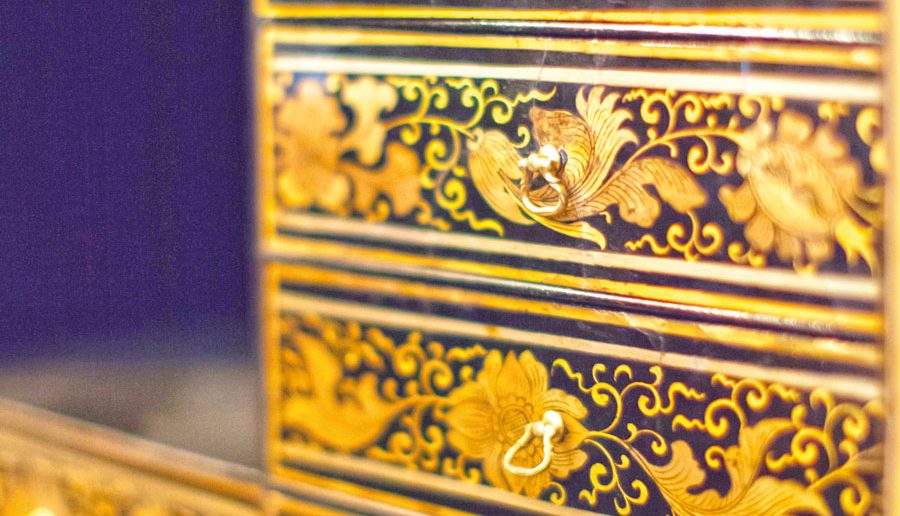 Thomas Chippendale is a household name known for his exquisite furniture which adorns many of the majestic stately homes around the UK. Whilst famous for his stunning craftsmanship, it is less widely known that he was born right here in Leeds – Otley to be precise! 2018 marks the tercentenary of his birth, and to celebrate the anniversary there are events and exhibitions going on in the city, and around the country. This month our feature looks at the life of the man behind the cabinet doors!

Thomas Chippendale was born in Otley in 1718, an only child of John and Mary. He attended Prince Henry’s Grammar School and was probably taught the basic skills of wood working from his father, a joiner by trade. It is also thought that he may have received further training from Richard Wood who was a leading furniture maker in York. Even though Thomas came from humble beginnings, he was an ambitious man determined to carve out a future for himself. With this in mind, he moved to London to pursue his career. In 1748 he married Catherine Redshaw and they had nine children together.

To begin with, Chippendale probably worked as a journeyman cabinet maker. By 1754 he had moved to St Martin’s Lane where the family business would operate for the next 60 years. At this time, he went into partnership with James Rannie, a Scottish merchant who put some of his wealth into the business.

Perhaps it was this injection of cash which allowed him to publish his book, ‘The Gentleman and Cabinet Maker’s Director.’ This was the first furniture design book in England published as a means of self-promotion. Containing 161 illustrated engraved plates of Gothic, Chinese and modern furniture designs, the lavish book was a huge success, selling out almost immediately. A second edition was released the following year and a third followed in 1762 with new plates included.

The Director clearly had the effect Chippendale had desired, as all his known commissions except one, date from after its initial publication. He was requested to create furniture for major houses throughout England and Scotland, even being asked to fit out whole suites of rooms in some cases. The humble joiner’s son had established himself as an entrepreneur, employing as many as 50 craftsmen.

He took on the role of artistic director, supervising his workforce and keeping ahead of new fashions.  Celebrated architect of the time, Robert Adam trusted Thomas to design and make appropriate furnishings befitting his buildings and they enjoyed a successful partnership.

One of Robert Adam’s designs, Dumfries House, in Scotland contains around 10% of the entire surviving Chippendale items in the world. It was due to be sold in 2007, and Prince Charles among others stepped in to stop the collection being broken up, preserving the house as a visitor attraction.

In a message for Chippendale 300 HRH Prince Charles wrote, ‘Chippendale is one of those rare individuals whose talents transcend both time and place; he not only achieved international renown in his own lifetime, but created an artistic legacy which endures to the present day. From his day to ours, ‘Chippendale’ has been a byword for excellence in design and manufacture. Whether in the Gothic taste, Chinese, Rococo or neo-Classical, Chippendale’s genius was to translate these into something both elegant and practical, stylish and domestic, and always of peerless quality… My own interest in Thomas Chippendale is very direct because, in 2007, I, together with a number of like minded individuals and organisations was able to ensure that one of Chippendale’s most important and complete furnishing commissions, Dumfries House in Ayrshire, was saved for the nation. The Great Steward of Scotland’s Dumfries House Trust, of which I am President, was established to conserve, develop and manage the collection, the house and estate for future generations. I am particularly pleased that four pieces from Dumfries House have been chosen for the Chippendale Tercentenary Exhibition in Leeds. This is the centrepiece of a nationwide celebration of Thomas Chippendale’s life and work which will refocus attention on this great British designer, craftsman and entrepreneur.’

Chippendale’s preference was for long running commissions where he was expected to equip the full building with furniture right from the grand, show-stopping designs for reception rooms, to the utilitarian objects for servants’ quarters. Good examples of this practice that can be seen today include Harewood House and Nostell Priory. Despite his fame for these ‘grand designs’ he also appeared to sell to casual customers too. Items such as hexagonal tea tables could be purchased for around four guineas each, and he had a wholesale side of the business importing large sheets of French mirror glass.

Chippendale’s partner James Rannie died in 1766, and at this point the bookkeeper Thomas Haig borrowed money to become a partner. Henry Ferguson became a third partner and the company was named Chippendale, Haig and Co. In 1776, Thomas senior retired, placing responsibility into the hands of his son, Thomas Junior. In 1779, Chippendale died of tuberculosis and was buried at St Martin-in-the-Fields. Despite the incredible furniture that had been designed during his lifetime, for some of the wealthiest families in the country, Chippendale himself did not die a rich man – his possessions were valued at less than £30 after his death. Thomas junior tried his best to keep the family firm that he had worked in for most of his life going, but like his father, was beset by financial difficulties. When Haig died in 1803, Chippendale junior was declared bankrupt and the workshop finally folded in 1813.

Even though Thomas Chippendale had not necessarily succeeded in his ambition to become a rich man, he certainly left a legacy far more important than money. The craftsmanship and stunning designs of his furniture still adorn some of the largest and most influential stately homes across the UK, giving visitors today a glimpse into the decadence and wealth of Georgian Britain’s aristocracy. The pieces are a true representation of cutting edge design, lovingly hand-crafted by highly skilled craftsmen.

Chippendale 300 is the nationwide celebration taking place this year to mark the anniversary of his birth. Historic houses, museums, charities and craftsmen’s organisations that own, look after, study and work with furniture and interiors designed and produced by Chippendale have come together to present a programme that reveals the richness of the collections and interiors designed by Chippendale and still on public show in Britain. These include Burton Constable Hall, Dumfries House, Firle Place, Furniture History Society, Harewood House Trust, Leeds City Museum, Master Carvers Association, Newby Hall, Paxton House, Temple Newsam, Weston Park and a number of National Trust properties that hold Chippendale work including Nostell’s significant collection. Here are just a few of the events taking place locally;

Running until the 9th of June is a fantastic exhibition of his work at Leeds City Museum. Thomas Chippendale, 1718-1779: a celebration of British craftsmanship & design launched a nationwide programme which will celebrate his life as a furniture maker, designer and entrepreneur. Showing key pieces from the Royal Collection, Paxton House, Newby Hall and Dumfries House, the exhibition explores his rise to prominence, the quality of his work and the legacy his brand has left to the present day. As well as some of the best examples of his work, also on display are some objects from his early life, beautiful hand drawn designs and a first edition of The Director. Some of the items have never been on public display before, and the exhibition offers a unique look at the furniture outside of their usual stately home settings. Away from the elaborate and ornately decorated rooms, the pieces can be studied and enjoyed as works of art in their own right – the details more startlingly obvious when the eye is not drawn by the often busy, yet beautiful 18th century rooms that the furniture normally lives in.

Harewood House has some the most outstanding Chippendale furniture ever to be produced, commissioned by Edwin Lascelles for his new house built by John Carr of York and Robert Adam. Chippendale’s firm began work at Harewood in 1767 and the overall commission probably exceeded £10,000 – his most significant single commission. Thomas Chippendale – Designer, Maker, Decorator is a series of exhibitions that feature the breadth of his design styles, works in focus, and launch new research considering the original appearance of the White Drawing Room and Gallery and his approach to interior design. The programme also includes contemporary artists’ responses to Chippendale’s work within and outside the house.

Throughout this year, Interior Worlds: Thomas Chippendale at Nostell will explore the man behind the brand, showcasing the range of collections he designed and offering new ways of seeing both the wider context of 18th century fashion, patronage and taste and the inner world of a top end designer working for a prestigious and demanding client. Highlights include a brand-new exhibition revealing Chippendale’s special connection to Nostell through a unique archive of correspondence and a collaboration with The Hepworth Wakefield. The role of artists in influencing interiors will be explored, through key loans from both collections and special commissions by contemporary artist Giles Round. Adults and children are also invited to get hands-on with creative workshops and events throughout the year to make their own masterpieces.

To celebrate the fact that the famous furniture maker was born and raised in Otley, the town have a programme of events planned. You can pick up a map anytime now up until October to take a self-guided tour of key locations from the 18th century that Chippendale would have seen as a boy including his possible birthplace, the church he was baptised in and his school. In June, enjoy Celebrating Chippendale: Otley’s Famous Son, a festival of events such as a birthday party, a concert of 18th century music, talks by Chippendale Society members and an Antiques Roadshow style event. Micro-brewer Paul Briscoe and Harrogate’s Daleside Brewery have also collaborated to produce a ‘Chippend’Ale’ beer to enjoy on the famous run and in Wharfemeadows Park a riverside flowerbed will be planted which has been inspired by the craftsman. For more information visit;

Open the wardrobe as wide as it goes

A man walks his dog and throws it a stick –

a chair-leg when freed from his hand.

along a terrace row of dolls’ houses,

Lovers hold each other in a wood-vice grip,

lips red as the head on a match,

the sawdust Wharfe spills over the weir

near the bridge and the wooden church.

and gives birth to Russian dolls,

then slaps varnish on his wainscot jowls.

their wits as sharp as a chisel;

one starts to sing, another purses his lips

We clothes-peg people, we toothpick folk

thank our maker for his work everyday;

he carved each heartbeat, dovetailed our joints,

he sandpapered the hate away.

Many thanks to Otley Town Council and Matthew Hedley Stoppard for allowing us to print the poem!

There are many more events happening around Leeds and the rest of the UK, for full details visit www.chippendale300.co.uk