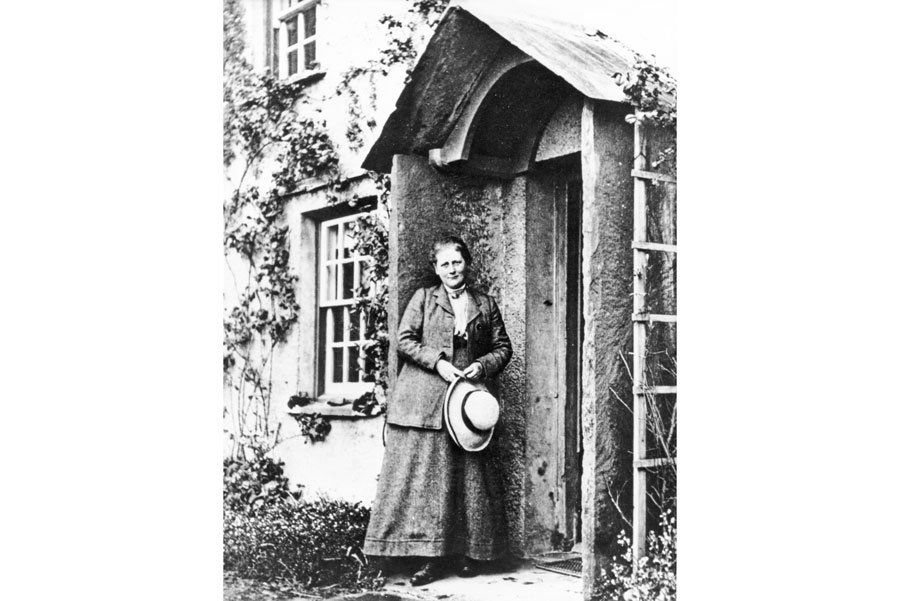 This year marks the 150th anniversary of the birth of Beatrix Potter. Many children in the UK grew up reading the tales of Peter Rabbit and friends, and the youngsters of Yorkshire were no different. The much loved stories written by Beatrix Potter are still going strong today with each new generation falling in love with the magical tales. Here, we take a look back at Beatrix’s life and the stories she wrote and beautifully illustrated.
CHILDHOOD YEARS
Helen Beatrix Potter was born in Kensington, London on the 28th July 1866. As a child, she and younger brother Walter had many pets including rabbits, and more unusual creatures such as frogs, lizards, snakes and even a bat! Both children loved to draw and their pets were often the subject of their sketches. Beatrix never went to school but had governesses to deliver home education, and as her love of drawing was encouraged, her parents also employed an art teacher. Her art revealed an early interest in the natural world as she would spend hours creating intricate sketches of both animals and plants.
The two models that Beatrix liked to sketch the most early on in her life were her rabbits. The first pet rabbit she had was named Benjamin Bouncer, who must have been quite the character as he apparently enjoyed the family holidays to Scotland where he would eat buttered toast and go for walks on his lead! Her second rabbit was Peter Piper who accompanied Beatrix everywhere and could perform tricks. The time that Beatrix spent in Scotland allowed her to develop a real skill for creating highly detailed drawings of plants and insects.
When she was a little older, Beatrix studied fungi at the Royal Botanical Gardens in Kew. Here she produced beautiful watercolours but at the same time became an adept scientific illustrator and even wrote a paper about her own theory on how fungi spores reproduced!
BLOSSOMING CAREER
Before she was a published author, Beatrix produced greeting card designs and illustrations for publisher Hildesheimer & Faulkner. She then produced some frog illustrations and verses for a popular annual, Changing Pictures, by art publisher Ernest Nister. This, along with her love of drawing illustrations for her favourite stories, fired Beatrix’s desire to publish her own illustrated tales. She said “There is something delicious about writing the first words of a story. You never quite know where they’ll take you.”
The Tale of Peter Rabbit, one of Beatrix’s earliest stories came originally from a picture letter she sent to Noel, the son of her old governess Annie Moore. The story was rejected by several publishers so Beatrix herself printed 250 copies for family and friends in December 1901. This was an instant success, so much so that publisher Frederick Warne & Co changed their mind about taking it on, so long as she re-illustrated it in colour. Upon the book’s release in October 1902 it became an immediate bestseller. Her commercial success was cemented the following year with the publication of The Tale of Squirrel Nutkin and The Tailor of Gloucester.
As well as publishing stories, Beatrix also designed and created merchandise including the first Peter Rabbit doll that she made in 1903. Because of this Peter Rabbit is the world’s oldest licensed literary character! She also explored other options including a board game, tea sets and slippers, and ensured that all products remained true to her original illustrations and were high quality.
On a personal level, Beatrix became engaged to her editor at the publishing house Norman Warne in 1905. Sadly, she was to be left heart broken when he died of leukaemia just a month later.
FARMING IN THE LAKE DISTRICT
Finding solace in the beauty of the Lake District following the death of Norman, Beatrix used the income from her books to purchase farmland there, including Hill Top Farm which would feature in many of her later tales. She developed a relationship with local solicitor William Heelis through his assistance in her property dealings and they married in 1913. They lived happily together at Castle Cottage in the Lakes until her death in 1943.
Beatrix was very hands on with the fifteen farms she owned in her lifetime, and bred Herdwick sheep for which she won a number of prizes. Upon her death, she left all the farms and over 4 thousand acres of land to the National Trust, who in accordance with her wishes have kept Hill Top Farm exactly as it was when she lived there. The farm receives thousands of visitors every year and still today over 2 million books are sold around the world annually.

THE WORLD OF BEATRIX POTTER ATTRACTION
Just across Lake Windermere from Hill Top Farm is The World of Beatrix Potter Attraction in Bowness-on-Windermere. With 8 different areas to discover the worlds of some of Beatrix’s famous characters, including Peter Rabbit, Mrs Tiggy-winkle and Mr Jeremy Fisher, it is a fantastic day out for all the family young and old!
The attraction is celebrating 150 years of Beatrix Potter with a brand new family musical adventure called Where Is Peter Rabbit? at the Old Laundry Theatre on the site. The musical is based on five of her best loved characters and captures Beatrix’s poetry while staying true to her unforgettable illustrations. The show runs until 4th September, and there are also Character breakfasts, afternoon teas and high-tea/supper parties that can be booked before or after the live performances.
Thursday 28th July also marks the 25th anniversary of the attraction and they are celebrating by offering entry at 1991 prices all day!
For more information on the attraction or to book events visit
www.hop-skip-jump.com or to book tickets for the show visit www.oldlaundrytheatre.co.uk
In conjunction with the World or Beatrix Potter Attraction, the Yorkshire Reporter are running a competition to win a family ticket (2x adult 2x child) for the show. To be in with a chance of winning go to the competition page