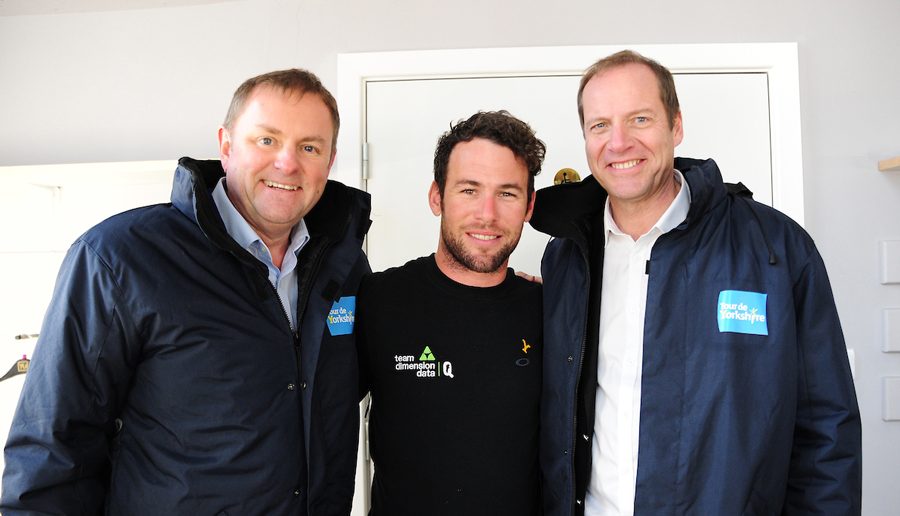 CAVENDISH BACK IN ACTION AT TOUR DE YORKSHIRE!

Tour de Yorkshire organisers Welcome to Yorkshire are delighted that Mark Cavendish has confirmed he will return to racing after injury at the 2018 edition of the race.

Cavendish suffered a dramatic crash at the Milan – San Remo race in Italy on Saturday 17 March, fracturing a rib and damaging his ankle after colliding with a traffic bollard, and reports had suggested that he would be back in action at the Tour of California (13-19 May).

His recovery has gone better than expected however, and Team Dimension Data have announced he will now be fit to compete in Yorkshire between 3-6 May.

The 32-year-old Manxman is one of the sport’s highest-profile figures having won no-less than 30 Tour de France stages in a glittering career that also includes the 2011 UCI World Road Race Championships title and a silver medal at the 2016 Rio Olympics.

Welcome to Yorkshire Chief Executive Sir Gary Verity was pleased to hear the news and is looking forward to seeing Cavendish in action.

He said: “Mark is a living legend in the world of cycling and we’re over the moon that he will be competing at the Tour de Yorkshire next month.

“His crash in Italy looked really serious but he’s such a tough, tenacious character and we’re thrilled he’s been able to make such a speedy recovery.

“I’m sure Mark will have his eyes on at least two of the stages on this year’s route and we can’t wait to see him launch his trademark sprint. It’s not every day you get to see a sportsman of his stature competing on home roads, and we’re certain he’ll receive a hero’s welcome.”

It has been a long-held ambition of Cavendish’s to ride the Tour de Yorkshire. He was the star attraction when the route was unveiled in Halifax last December, and he has a special affinity with the county as his mother lives in Harrogate.

Cavendish said: “I’m delighted to have recovered sufficiently from my injuries at Milan -San Remo to be back racing sooner than I initially thought and what better way to do that than at what could be described as a home race for me, the Tour de Yorkshire.

“My mother’s from Harrogate and obviously the last time I raced things didn’t go that great (for me) in the 2014 Tour de France; but one thing I do remember is the incredible crowds and I know that the Tour de Yorkshire always provides. It’s the first time that I’ve raced the Tour de Yorkshire and I’m extremely excited.

“Results-wise; I’m not sure where my form will be actually only having had a couple of weeks back on the bike but I’ll just be absorbing the atmosphere in one of the most beautiful places in the world.”

Cavendish is the second big-name rider to confirm his attendance at the Tour de Yorkshire after his Team Dimension Data team-mate Serge Pauwels revealed last week he would be back to defend his title.

Further star riders are set to be unveiled over the next two weeks before the race commences in Beverley on Thursday 3 May.

Feeling fit? Then why not tackle parts of the 2018 route for yourself by taking part in the Maserati Tour de Yorkshire Ride. The three routes on offer are suitable for all abilities and culminate on the same finish line as the pros. Find out more at https://letouryorkshire.com/maserati-tour-de-yorkshire-ride